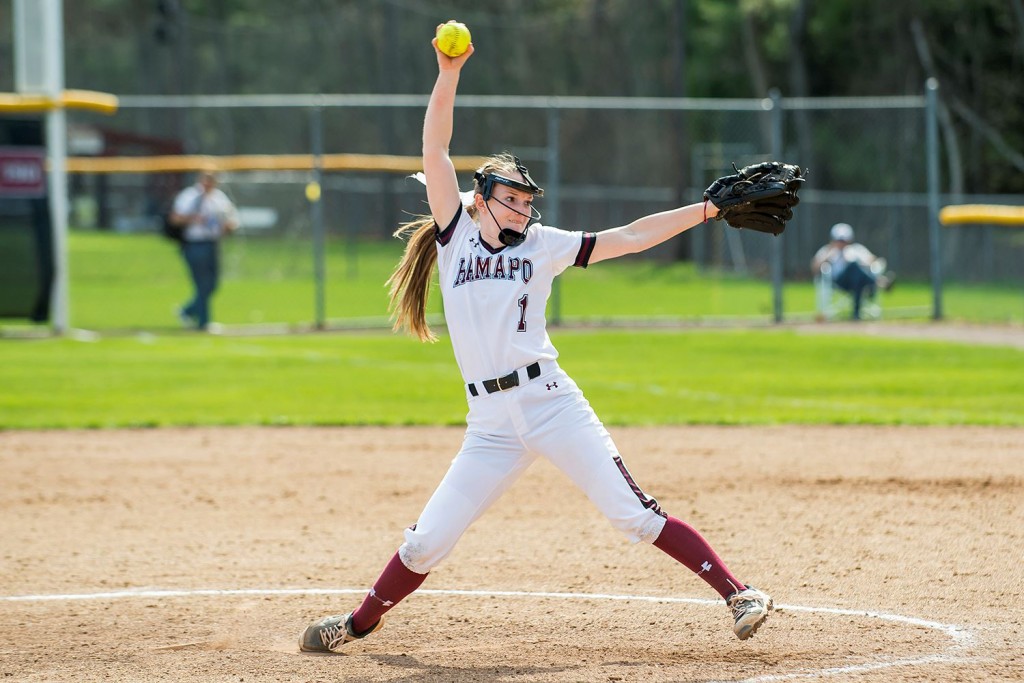 The Ramapo College women’s softball team completely dominated the diamond on Tuesday, April 16 at the Athletic Center. Ramapo shut out Rutgers-Newark 1-0 and 6-0 in an NJAC double-header. The team’s overall record is now 18-10 and 9-3 in the conference.

The first game was low scoring with Ramapo batting first. By the time the sixth inning rolled around, no runs had been scored by either team and Ramapo had recorded two hits while Rutgers-Newark tallied three.

In the top of the sixth, sophomore Krista Verrino got walked early which would end up being the winning run. She advanced to second on a bunt from sophomore Carli Egan who got called out at first.

Senior Harper Patsko then stole a base on a shortstop fielding error, while Verrino stole second base. Junior Kristen Ruggiero’s grounder down the third base line is what would push Verrino to third base. Finally, junior Kendra Decker put out a RBI single to second base, which would plate Verrino for the only run of the game.

The Roadrunners secured the victory in the bottom of the seventh inning by making two field plays and a strikeout. Three batters went up, and three outs occured for the Scarlet Raiders.

Senior Erin Fitzsimmons pitched the entire game, letting up five hits and earning five strikeouts out of the 25 batters she faced.

Ramapo definitely came out hot after the break, scoring four runs in the very first inning of the game.

The first batter, Howarth, started the streak with a double down the center field line, followed by Verrino with a single to left field that advanced Howarth to third. Egan also singled to left field, recording an RBI as Howarth crossed the plate for the first run.

Patsko then stepped up to the plate for an RBI, posting a double to left field to plate Verrino. Two outs later, junior Sarah Browning recorded a double RBI by sending the ball to right center so that Patsko and Egan could cross homebase. Heading into the bottom of the first, the Roadrunners led 4-0.

Howarth scored again in the second inning after first posting a single to right center and then gaining a run off a double by Verrino. The score then stood at 5-0 with five more innings left to play.

In the fourth inning, Egan ripped a homer to deep left field, bringing herself all the way around the diamond for run number six.

The rest of the game remained scoreless, and ended with a victory for the Roadrunners. The team posted 12 hits while the pitching staff let up zero in an impressive showing.

Egan proved to be the team leader in Game two after scoring two runs, nailing three hits and recording two RBIs for the game.

Right behind her was Howarth with two runs and two hits. Along with Howarth’s noteworthy statistics, Verrino and Patsko both tallied two hits, one run and one RBI.

Jessica Becchetti started on the mound for the Roadrunners, letting up no hits and three walks in the first three innings of Game 2.

Fitzsimmons returned to the mound for the last four innings to close. She went perfect, also letting up no hits, in addition to no walks and two strikeouts. She claimed the win to improve her personal pitching record to 11-7 on the season.

The combined pitching staff was on fire, ending in a shutout and leaving Rutgers-Newark searching for answers.

The softball team’s next set of games will be on Saturday, April 20 against Stockton University. The Roadrunners will be traveling to Pomona for the NJAC double-header match-up at 1 p.m. and 3 p.m.