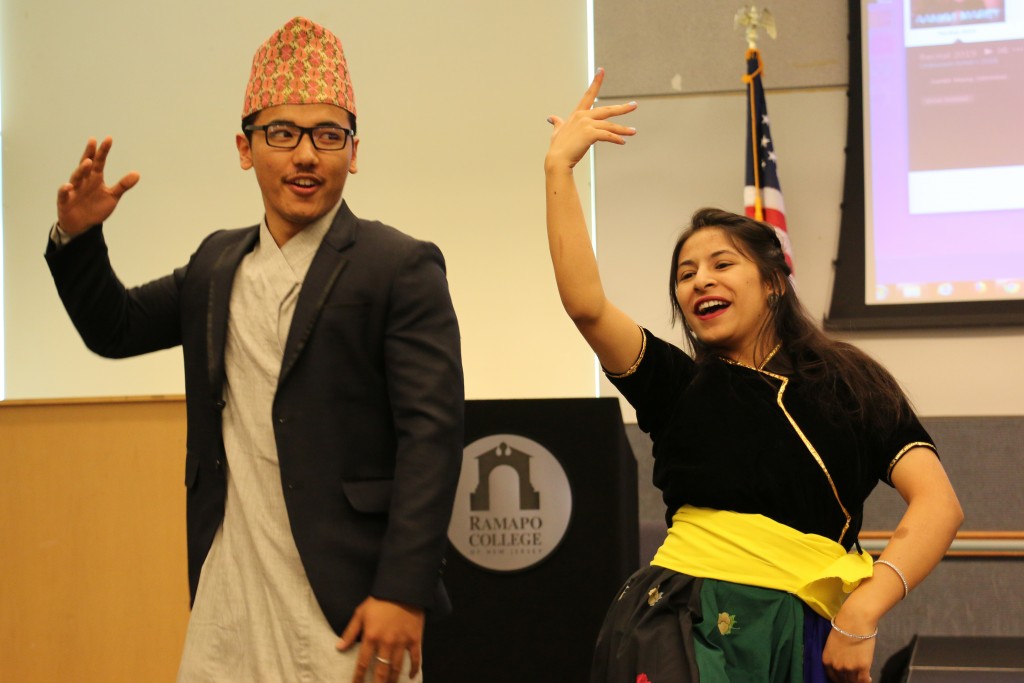 Members of the Ramapo College community gathered in the Trustees Pavilion on Wednesday afternoon to close out the College’s Year of Asia and the Pacific. The Roukema Center’s Director of International Education Ben Levy helmed the celebration, which opened with traditional Nepali and Bollywood dances performed by Ramapo students from Nepal and members of the College’s dance club, and closed with a series of lectures presented by students and faculty.

Several speakers were recent additions to the lineup, due to the absence of the Honorable Mr. Pushpa Raj Bhattarai, the consul general for Nepal in New York. Mr. Bhattarai was forced to cancel his appearance due to illness.

“Asia and the Pacific” is the latest in a series of regionally-themed years at Ramapo College that began in fall 2015, with the launch of the school’s Strategic Plan for Comprehensive Internationalization. Each year features study-abroad scholarships, research grants, international programs and on-campus events dedicated to the global region in question. This year, the College sent seven faculty members east to conduct research in countries including Vietnam, Japan, Thailand, Fiji and South Korea.

Purvi Parekh, an analyst in the College’s Information Technology Services department and host of the weekly Hindi Language Happy Hour program, announced the potential formation of two new student organizations born from the past year’s programming.

“One is the dance club called Notch. Its focus is on Bollywood and other cultural dances,” Parekh said. “As well as a potential cricket club on campus.”

Parekh hopes the College’s Strategic Plan will continue to grow and meet its goals.

“Thanks to the focus on the Year of Asia and the Pacific, we can move ahead and keep the momentum in the campus community,” she said.

Other speakers included student members of the Honors Program’s 10-day trip to Nepal in March (one of whom is the writer), who discussed their service work in rural Nepal and cultural immersion experiences within the city of Kathmandu.

“Seeing the Himalayas was an eye-opening experience for a lot of the students on the trip,” freshman Danielle DeAngelis said laughingly. “Because once you look at the Ramapo Mountains and then the Himalayas, there’s not really a comparison.”

Graduating senior Christine Dwyer, who recently became the second Ramapo student in the College’s history to receive a Fulbright student grant, also presented at the celebration. She discussed her semester abroad in South Korea and her upcoming return to the country as a Fulbright English Teaching Assistant (ETA) during the 2019-2020 academic year.

“[As a study-abroad student] I went to Ewha University, which is the largest women’s university in the world,” Dwyer said.

While Dwyer was in South Korea, the country’s President Park Geun-hye was impeached as the result of a scandal that involved Dwyer’s host institution.

“The president had a connection with a student at Ewha,” she said. “The student got in on a false application, and professors were passing her because of her high-status connection to the president.”

Dwyer was also present for the election of current President Moon Jae-in, and visited the famous Demilitarized Zone (DMZ) between South Korea and North Korea.

The closing celebration concluded with a lecture from the Anisfield School of Business’s Dr. Rikki Abzug, a professor of management, who presented research gathered during her spring break in Vietnam. Levy retook the podium to thank those in attendance and announce next year’s region: the Middle East and North Africa.