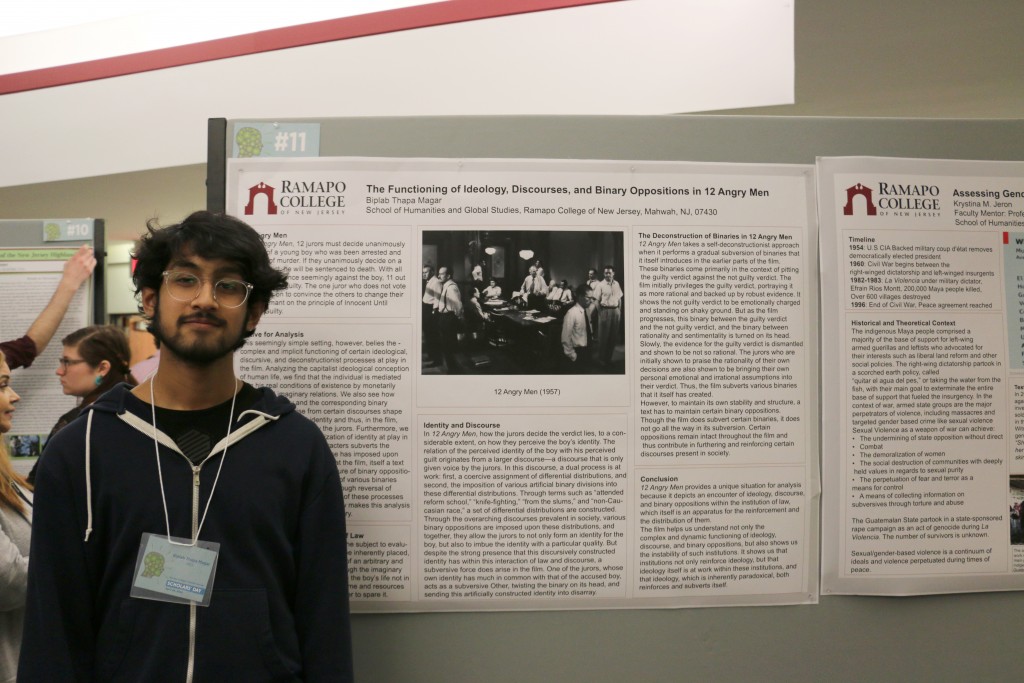 Each year Ramapo hosts a presentation of academic research completed by students of all disciplines. Scholars’ Day celebrates “student creativity and scholarship,” and from the impressive caliber of this year’s presentations, certainly promotes just that.

The session began with an hour of poster presentations, giving students who have worked on research under a professor an opportunity to promote their work and answer questions. Student presenter Alyssa Rosa took this opportunity to pursue information she finds incredibly important.

Coming from a philosophy major, she decided to apply knowledge she gained from her bioethics course to analyze what she calls “A Parent’s Responsibility to Vaccinate,” as her presentation is titled. Other students took the opportunity for more creative pursuits, analyzing literature and film.

Sophomore Jessica Ryan’s presentation “The Collective Unconscious Reflected in Literature” analyzes the close ties between a work from 1611 and a song from 1978, which resonate identical themes and almost identical organization. Her thesis focused on what has been deemed the “collective unconscious,” or knowledge that has been brought down through generations and can be seen in works like these, which have no known intentional connection from the later artist.

Another student who took a more creative route, yet still applied his research to topics which he deems valuable, was literature major Biplab Thapa Magar. His work analyzed “The Functioning Ideology, Discourses, and Binary Oppositions in 12 Angry Men” and recognized the themes made both intentionally and unintentionally.

Senior Sanjay Chhetri of SSHS, a psychology major, gave a passionate presentation on his research of the psychological concept of “flow.” Being from Nepal, he spoke to the strong Buddhist and Hindu concepts of Nirvana, which he has connected in his scientific analysis of flow. He defines “flow” – his “favorite f-word” – as a “union between the do-er and the doing.”

Other presentations included senior Angely Montilla’s presentation on discrimination of domestic workers in the Dominican Republic, which she titled “De Eso No Se Habla,” which translates to “we don’t talk about that.” The topic is very taboo, and thus she deems it important to research the causes and potential remedies for the situation.

Each school’s scholars did an impressive job of bringing new and individual issues to light, or simply informing others on a creative pursuit few may know about. Scholars’ Day is an opportunity for Ramapo’s students to take pride in their work, and a way to inspire underclassmen to pursue research and become leaders in their academic fields.