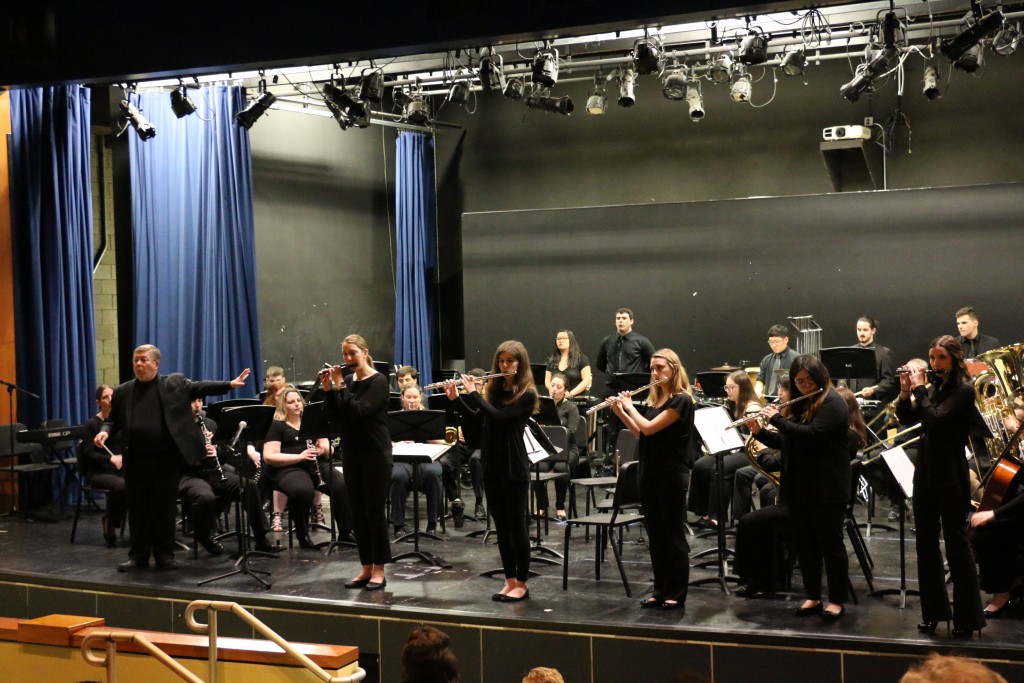 Ramapo’s concert and jazz band performed a spring concert on Tuesday evening in the H-Wing auditorium. The concert band, conducted by Dr. Chris Wilhjelm, took the stage before the jazz band lead by Professor Bobby Deitch.

Composed of 35 students and faculty members, the concert band features a diverse assortment of woodwind and brass instruments, including flute, oboe, tuba, and French horn among other auxiliary percussion instruments.

Two of the songs selected by Dr. Wilhjelm had historical significance to the year 2019. “Make Our Garden Grow” by Leonard Bernstein was chosen to mark what would be Bernstein’s 100th birthday. The performance celebrated his life as a legendary American composer, conductor, and pianist. He is remembered as being one of the first conductors born and educated in the United States to receive worldwide acclaim.

The closing song “Cheerio” also shares a centennial significance as the Goldman Band would conclude their performances in Central Park with that exact tune. During “Cheerio,” flute and piccolo players lined up at the edge of the stage, while Wilhjelm encouraged the audience to clap, sing, and whistle along.

After their final song, Wilhjelm asked any graduating seniors to stand up, leaving only senior Errol Bareiss on baritone saxophone standing. Wilhjelm said, "Last year, there was a much larger graduating class that took up nearly half the stage, so it was a rewarding experience to teach many new incoming underclassmen this semester."

After the performance, band members removed chairs and crafted a more intimate seating arrangement for the 14-member jazz band which featured a rhythm, brass and saxophone section.

The jazz band played a mix of jazz standards, funk, and contemporary songs, including the pop song “Happy” by Pharrell Williams, a medley of Earth Wind and Fire songs, and the Count Basie song “Shiny Stockings.”

The jazz band also played the famous jazz standard, “Take Five” by the Dave Brubeck Quartet. Deitch said this was the first jazz song to cross over onto the pop charts.

After the band played “Spain” by Chick Chorea, they closed with an energetic rendition of “Day Tripper” by the Beatles.