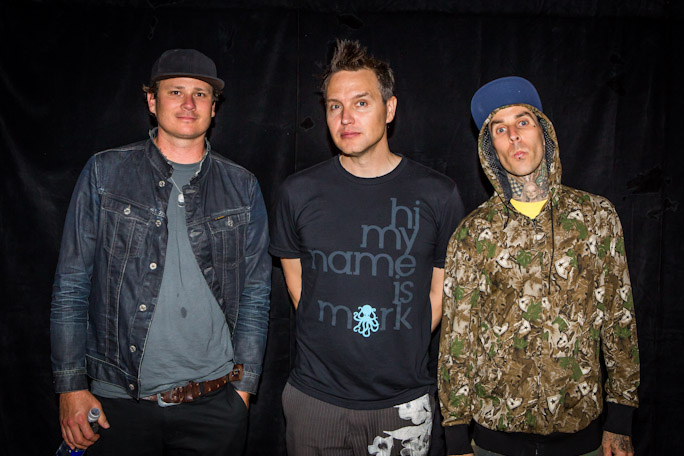 Photo courtesy of The Cosmopolitan of Las Vegas, Flickr

The veteran pop-punk trio, Blink-182, improved upon their sound with darker tones and themes on their newest album release, “Nine.”

Although “Nine” is the band’s ninth album to date, it’s their second release since founding member Tom DeLonge left the band. DeLonge’s higher-pitched vocals were an integral part of the band’s music, as they contrasted bassist Mark Hoppus’ lower range vocals and largely contributed to their pop music appeal.

Despite the loss of a founding member, the band chose to continue going by the name Blink-182, after Matt Skiba permanently replaced DeLonge in July 2015. One year later, in 2016, the trio released “California,” the first Blink-182 album to not feature DeLonge’s vocals or guitar playing.

“California” also marked a return to playfulness and immaturity in their songwriting featuring formulaic, carefree songs about different relationships. However, their new album “Nine” is a complete 180 degree turn for the band as it confronts more serious issues.

The darker material reflects a dark period of Hoppus’ life. The 47-year-old musician has been transparent about his recent struggles with depression. Being a pop-punk band, Blink-182’s music is typically characterized by fast tempos that often translate into up-beat songs, but Hoppus has said he is not currently in the correct headspace to be writing those kinds of songs.

"My brain naturally goes in cycles to dark places and I have to actively combat that. I'm not in a place right now where I want to write happy, up-tempo songs,” the bassist revealed.

Even the melodic “Happy Days” is more about yearning to put days of frustration and self-doubt in one’s past than it is a song about happiness. The repetitious, positive affirmation of “wanting to feel happy days” is juxtaposed by the “walls of isolation inside of my pain.”

From a composition perspective, many of these songs, including “Run Away” and “On Some Emo S**T,” are driven by heavy electronically enhanced drumbeats courtesy of drummer Travis Barker. Although this instrumentation gives a significant edge to their songs, which was absent throughout their previous album, it feels as though the guitar parts are too subtle or even non-existent at times

“Darkside” is one song that relies heavily on the drums to dictate the mood of the song; it cycles through three different drum grooves leading up to the chorus. The drums and vocals lead the show while guitar dwindles lazily in the background.

The major singles on this album, namely “Happy Days” and “Blame It on My Youth” also fall in-step with radio-friendly pop songs that seem to only come alive during the choruses.

However, the stark contrast in instrumentation fared better than another rendition of “California,” where formulaic hooks and immaturities in the songwriting abound.

While writing “Nine,” Hoppus, Skiba and Barker also took inspiration from current events and political news. The song “Heaven” is a response to the Thousand Oaks shooting, which took place within two miles of Barker’s home, while “Black Rain” confronts issues with organized religion.

Even though the production is lacking in some areas, most of the songs on this album are conceptually coming from a place of contemplation and honed what the trio can accomplish when they flesh out complex ideas by writing songs that serve themselves.