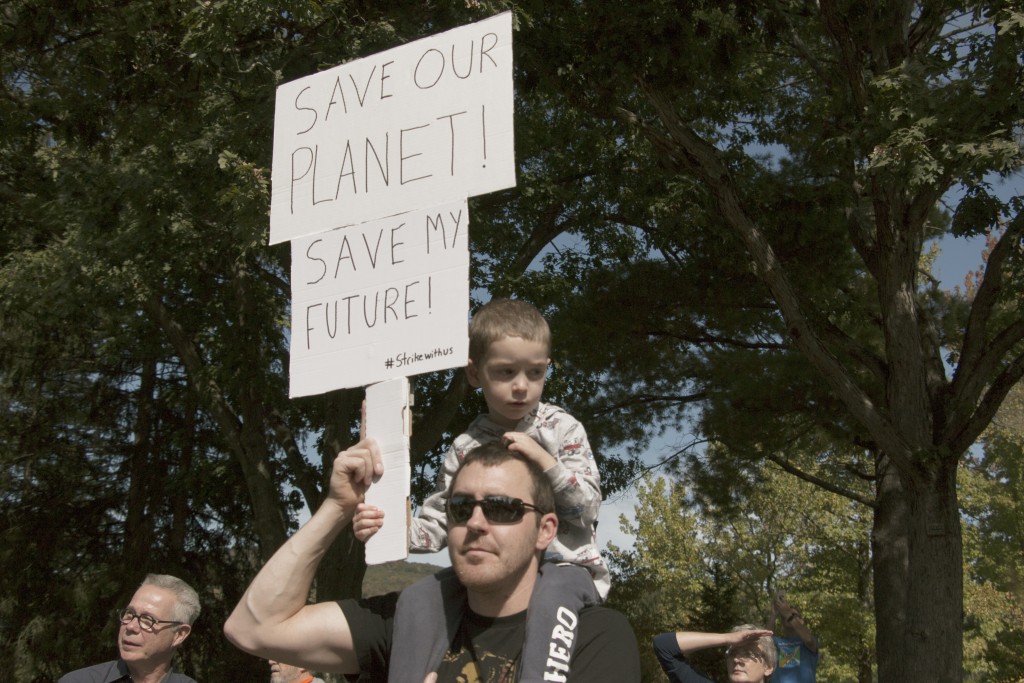 Another series of songs were followed by an open floor for strikers to share their stories, poetry and beliefs about the importance of climate change activism.

Tucker-Borrut shared her personal interaction with awareness for climate change, having come from Canada to attend school at Ramapo. Her realizations left her less than satisfied with how climate change is addressed in America.

“We need to demand action from our politicians and those in the mansion at Ramapo,” she said.

After stories were shared from members of the local community, the school requested that the strike return to their reserved space at the Arch. This was initially met with some defiance, but Vasisth supported the move in favor of striking respectfully.

Back at the Arch, activists climbed atop the stone formations and continued to preach the importance of action. Ramapo Green listed their demands for the college to “become a leader for environmental justice and action.”

One student took the floor and made an especially impactful statement.

“My name is Miriam Sokolska, I’m a sophomore here at Ramapo and I’m very angry.”

She proceeded to remind her fellow students and community members about the importance of voting for candidates with support for climate justice, and those who do not accept money from non-ecological lobbyists.

“Climate change is a class problem,” she continued. “It is a gender problem. Please vote!”

The intersectionality between climate change and other social issues was brought to light more than once during the strike. The negative impacts of climate change can often be placed on communities that have little power against it, which is one of many reasons students stressed the importance of voting.

“Everyone has the opportunity to vote with their dollar,” said senior Eric Williams.

A representative for the Ramapough Lenape Nation, She Who Walks with Trees, compounded these statements for voting by thanking the Ramapo community for being a supporter of native rights. She described the importance of activism and awareness for those with a less heard voice.

Change and activism is being demanded by students of all walks of life at Ramapo. The strikers are reminding the community of the importance of knowing the facts and following them.

“If no one is listening to real proof when ten years ago they were listening to myths, we need to force change,” said freshman Casmira Calascibetta.

Compared to previous years' turnouts for Ramapo Green events, the Climate Strike was a major success. With 123 sign-ins, only 23 not from Ramapo, the support for change is ever growing.

Ramapo Green will host events for “Climate Action Week” in the following days to strengthen the impact of their message and reinforce the need for change.