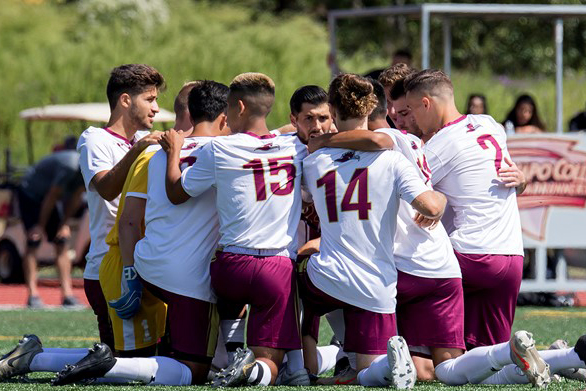 The Ramapo College men’s soccer team tied The College of New Jersey, 2-2, after two scoreless overtime periods on Saturday, Sept. 28 in the team’s ninth game of the season. Ramapo’s overall record now stands at 5-0-4 while their NJAC conference record stands at 1-0-1.

The Roadrunners came ready to play and proved their strength early in the game by getting on the board first. From 25 yards out, freshman Raul Macedo put out an assist to senior Bashkim Saiti who fired a shot to the back of the net at 18:30. The goal was the first of the game, and Saiti’s sixth for the season. Ramapo’s early 1-0 lead stuck for a while, being that no goals were recorded by either team for the remainder of the half.

Despite the goal, Ramapo was outshot by TCNJ, 7-5 in the first half.

The second half was way more action packed, beginning with TCNJ tying it up 62 minutes in, making the score an even 1-1.

The Lions were able to steal a second goal, and the lead at 72:42 off a header goal in the box. From there, the Roadrunners continued firing shots, hoping to tie up the game once again.

In the 15 minutes following TCNJ’s second goal, Ramapo hopes were satisfied as they tied the game 2-2. Senior Ariton Mimini contributed the game-tying goal by ripping a shot in front of the net off an assist from team captain Joseph Fala. The score stood at 2-2 for the rest of regulation play.

For the second half, Ramapo led in shots posting ten to TCNJ’s six.

The next twenty minutes were hard fought, but not successful in a victory for either team. Both overtime periods remained scoreless, leaving the final score to stand at 2-2.

Ramapo held a 4-1 shot advantage in the first overtime period, but fell short in the second, only recording two shots to TCNJ’s five. Regardless, the Roadrunners came out on top in shots for the game ending with a total of 21 while the Lions collected 19. In shots on goal, Ramapo trailed by two against TCNJ, 12-10.

For the duration of the game, Ramapo was rewarded three corner kicks, while their opponent only received two. Aggression was clearly present on the pitch, being that both teams recorded fouls in the double digits: Ramapo with 16 and TCNJ with 17.

Fala and Saiti led the team, each with seven shots apiece. Fala recorded three on goal, while Saiti posted five on goal. Other players like freshman Thiago Stallhbaum contributed two shots for the team, while Mimini nailed two, followed by seniors Justin Charkowski and Ronald Kestelboym who tallied one each.

A draw is not always the most desirable outcome, but it is also not a loss, so the men’s soccer team is still labeled undefeated for the season. The team will return to action on Monday Sep. 30 for a non-conference game against the City College of New York. The game will take place at the Athletic Center turf on campus and kickoff is at 4 p.m.