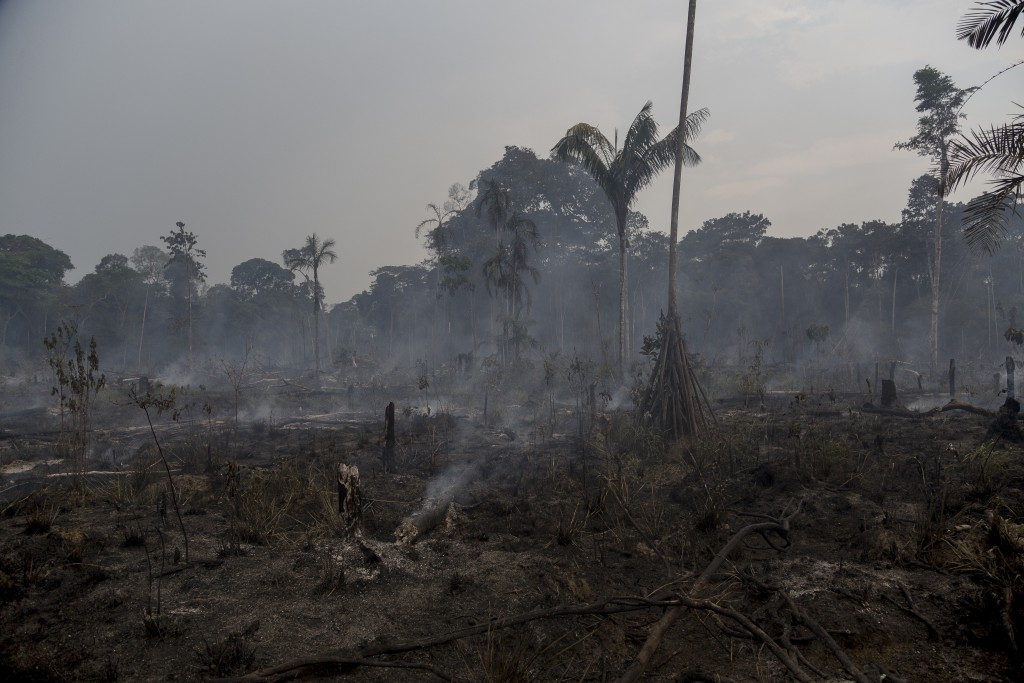 In response to the surge of wildfires that consumed the Amazon rainforest this past year, a panel of professors gave a presentation explaining the underlying reasons for the destruction in the Brazilian Amazon on Sept. 30 in Friends Hall.

Eric Weiner, an associate professor of environmental science, began the discussion with a presentation of photographs he captured while working in the Amazon rainforest.

The Amazon rainforest boasts a “mega-diversity” of plants, animals and insects according to Weiner. It contains over 900 tree species where as many as 2,800 inspect species could be found in just one tree.

As a forest ecologist, Weiner has worked with indigenous people in the Amazon and students to identify ways to boost socio-economic values of forests. Together they find seedlings of tree species that have never been studied or used by indigenous people before and figure out how to get that species to grow.

The Amazon rainforest’s rich biodiversity and the livelihoods of the indigenous people who live there are severely threatened by deforestation and selective logging that cause wildfires, Weiner explained.

Since January of this year, 121,000 fires have spread across Brazil and more than half of those fires are taking place in the Amazon.

Weiner said about 65 percent of deforestation in the Amazon is due to cattle ranching, which requires large plots of land that are not meant to raise cattle sustainably. Over the years research revealed that most forest fires happened in forests where logging was occurring.

The large trees that were removed from the Amazon were providing a canopy for the vegetation beneath them. Without a canopy of trees, sunlight directly penetrates the ground and dries out the vegetation, making the selectively logged forests extremely flammable.

The sustainable alternative is indigenous people’s method, shifting agriculture, in which vegetation is cut down, burned and then cultivated again. Although it requires large amounts of land indigenous natives spare large forests in pursuit of reusing smaller secondary forests.

Currently there are not as many fires in the Amazon as there were in 2005. Weiner said the recent media attention that this year’s fires received could be in response to the new Brazilian government that does not support indigenous people’s rights.

Weiner said ethnic cleansing, in which native people are forcibly removed from their land, is counterintuitive because then they aren’t there to properly care for and protect their land. He suggests that governments should work with native people to better conserve land and resources.

“It’s so frustrating to have thought that maybe things were getting better, and maybe they were, and now we’re in a period where things are going backward in a negative way,” Weiner said during his concluding remarks.

Following the panel, freshman environmental science major Kristina Hollosi said the discussion was important and was disappointed more students did not attend it.

The 50 students who attended the talk is half the number of Ramapo students who participated in Ramapo College’s Climate Strike on Sept. 20.

“I wish there would be more people here,” Kristina Hollosi said as the room emptied.

The rapid attention the recent fires in the Amazon received on social media does not reflect in the number of people who attended climate action events according to Hollosi.

“I think people are just saying it on social media like, ‘Oh, this is horrible,’ …And that resharing it means that they care about it and they did their part of fixing the problem.”

Freshman environmental science major, Jordan Heine, added, “Everybody needs to know about stuff like this, at least sustainability.”

“Spreading awareness? Good,” said Heine. “But you need to attend sessions like educational stuff and learn how to contribute.”