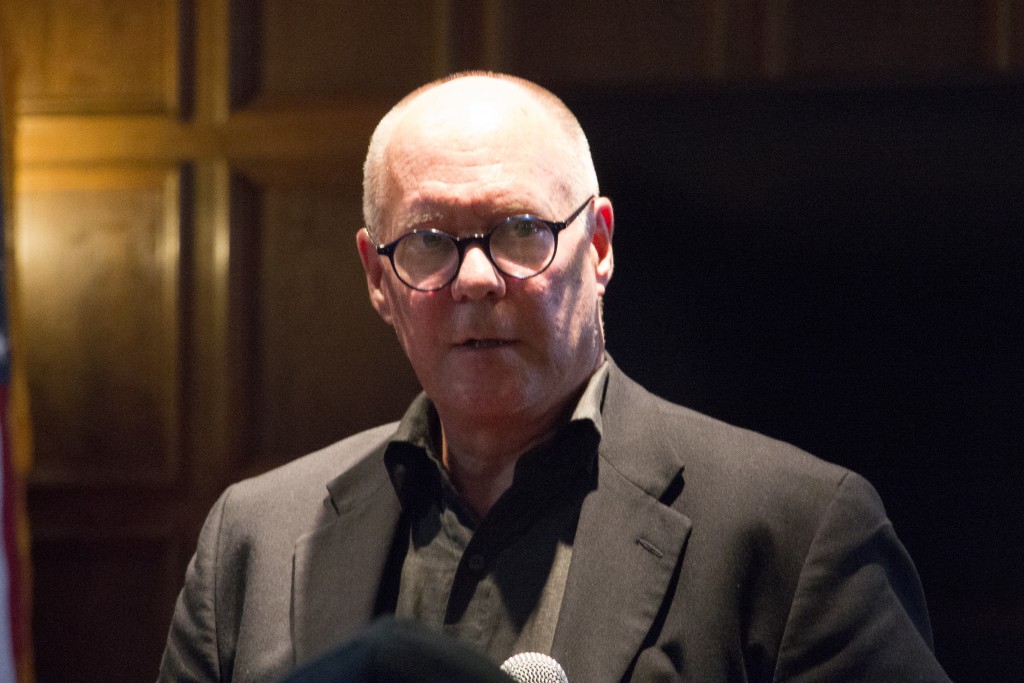 The York Room in Birch Mansion was silent and overflowing with students on Monday afternoon, as visiting author David Baker read from his collection, “Swift.”

Baker was invited by creative writing professor James Hoch, but several professors brought their students for the reading as well. He began with his poem “Murder” on the request of an eager reader.

He followed each poem he read with an explanation and a tale of inspiration, which can be incredibly helpful for young writers. “Swift” includes highlights from his 32 years of poetry writing, but Baker noted that none come from his first book.

He offered a piece of advice to students about writing and reading poetry: “When a thing looks like two, three or four different things, stay there.”

His second poem, “Pastoral,” was aptly punctuated with a loud boom from the library construction matching the final line, “hear the wheat roar–”, sending the silent room into a fit of laughter. Baker himself could not help but joke about his apparent prophetic skills.

After another read from “Swift,” Baker gave students a look into a work in progress. His still in-revision poem, “Hold Hands,” drew attention to the detainment of undocumented immigrants.

Baker’s light-hearted nature concerning his work, which deals with serious themes like death, divorce and love, made all in the room feel connected with the work.

All in attendance were offered the opportunity to ask for a poem as Professor Hoch continually allowed time for “one more.”

One student requested to hear “Never Ending Birds,” a poem Baker said he wrote based off something his daughter once said to him in the car, on a day much like Monday.

After his readings, Hoch joined Baker at the front of the room for a Q&A.

To lead the discussion, Baker answered questions about his college years. He said that he originally intended to do music but found that poetry suited his love for music.

“I am restless about writing poems,” he said. “I am not a professional, I am an amateur. I want to not know what I’m doing.”

Through speaking about his own writing process and his love for Walt Whitman’s poem “Lilacs,” Baker shared an insight for many poets. His desire to write without knowing where he is going with a poem appears as a sense of freedom for him that some writers may be afraid to embrace.

Along with his inspirations, of which his love for Emily Dickinson was at times passionate to the degree of humor, he was asked about his choices in form and subject matter.

Throughout the 64-poem-long collection, Baker mentions birds more often than perhaps any other image. One student asked why this was and his answer was simple.

Baker comes from rural Ohio, in an area where many birds fly over as they migrate each year. His subject matter, like many other poets, comes from what he knows best and associates with his memories.

Questions continued for over an hour as students and professors alike drained from the room, while others remained glued to their seats with unwavering attention. Students asked about the subject of specific lines and meanings, his thoughts on form and more.

The afternoon became conversational as it came to an end, Hoch and Baker sitting before the crowd as two old friends. Students thanked Baker for his time and his thoughts as they approached him to sign their copy of “Swift.”

Just before the end of the event, Professor Hoch shared one thought that may well have summarized the feeling of the whole afternoon:

“What connects the poet and the audience if not the poem?”