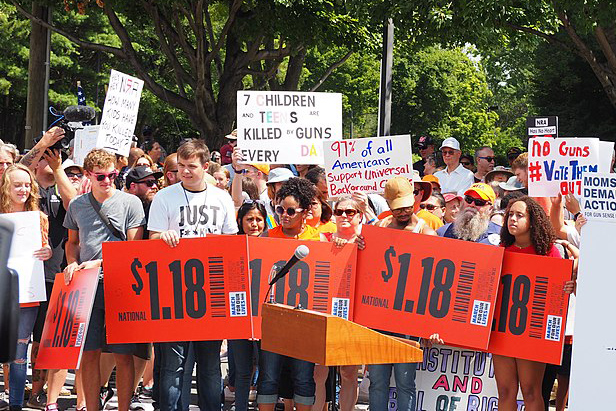 When the Sandy Hook shooting happened, the government promised to intensify gun laws and never let something like this happen again.

The most recent mass shooting to occur in the United States was on Oct. 6, at the Tequila KC bar in Kansas City, MO. The two shooters, Javier Alattore and Hugo Villanueva-Morales, killed four innocent people and injured several others.

Mass shootings have become such a frequent occurrence in the United States, and nothing seems to be done to stop them. There was a point in time where you couldn’t turn on the news without there being a “Breaking News” headline about another mass shooting with innocent lives lost.

The shooting started when Alattore and Villanueva-Morales got into an altercation at the bar and were kicked out by a bartender. They returned hours later and sought revenge by opening fire on all the people who occupied the bar.

Sadly, storylines much like this one have become all too familiar to the people of America. Too many innocent lives are taken every year by people who are mentally unstable, yet very capable of obtaining a gun to commit a horrible crime such as this one.

Authorities described this shooting as a random one, which is unlike other well-known mass shootings that occurred in places like Parkland and Sandy Hook.

Mass shootings have become too familiar for the citizens of the United States, and that is highlighted in an article by Vox.com. The article regularly updates the number of shootings that have occurred in America since the Sandy Hook massacre, and it’s shocking how much the number continues to increase.

On Oct. 7, there were only 2,250 shootings, but when checked again on Oct. 14, it updated to 2,260. It’s terrifying to think that there were 10 mass shootings in one week and there is nothing being done to prevent any more from happening.

In 2017, America experienced its worst mass shooting in history: the Las Vegas Concert shooting. There were 58 people killed and almost 900 people were injured.

People would think that after this shooting there would have been a crackdown on the sale of firearms, but this has yet to happen. There still continues to be mass shootings in America and there is nothing being done to prevent these things from happening.

America has normalized mass shootings so much that it seems like they are not even attempting to prevent them anymore. The standards to protect American citizens have lowered drastically ever since this string of mass shootings started.

How many more shootings will it take? How many more innocent lives lost? How many more thoughts and prayers before these violent crimes finally come to an end? They should have ended a long time ago, but they will not be put to an end until laws and policies change to protect the citizens of America.