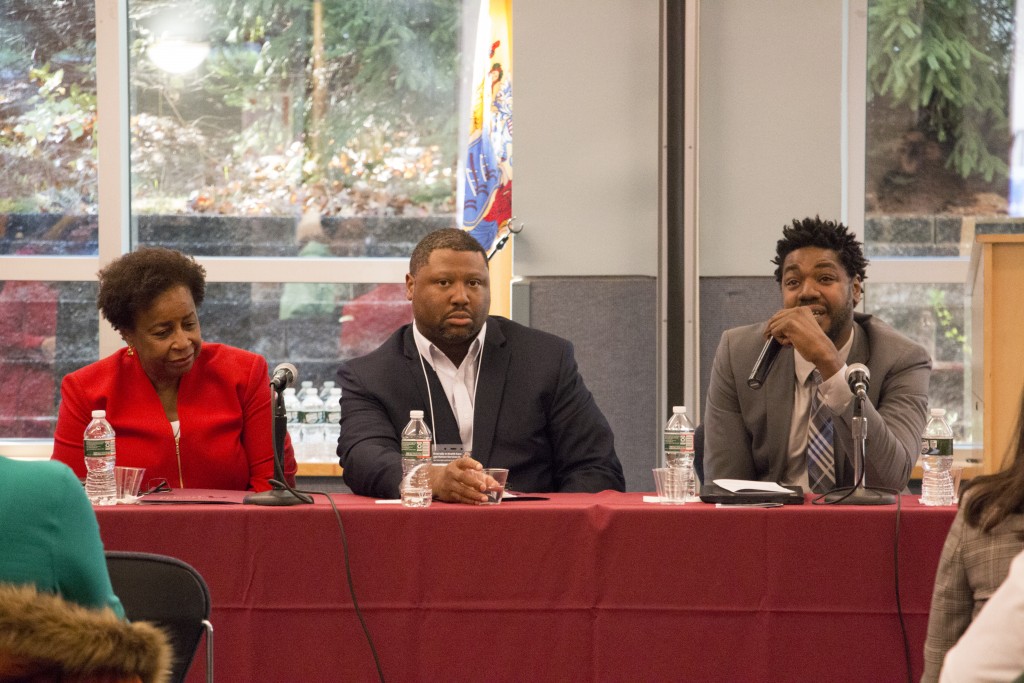 Over 300 students and faculty visited Trustees Pavilion for an all-day symposium called Diversity in Health Care and Human Services II.

The symposium is supported by the Undergraduate International Studies and Foreign Language federal grant that Ramapo received last year to enhance the Certificate in Spanish for Health Care and Human Services Professionals.

The symposium began at 9:30 a.m. with a welcome by Cathy Davey, Vice President for Institutional Advancement and Executive Director/Ex-Officio of the Ramapo College Foundation and Natalia Santamaria Laorden, Associate Professor of Spanish and Projector Investigator of the UISFL federal grant.

The first panel titled the Economic Advantage of a Diversity Approach in Health Care and Human Services, featured Allison Banks-Moore, CDO at Horizon BCBSNJ, Oscar Holmes IV, Professor of Management at Rutgers University, and Quincy Bloxom, Director of Operations for the Anti- Poverty Network of NJ.

According to Holmes’ professional research, there are mixed results about whether increasing diversity in a company leads to an increase in profit. With a mix of positive, negative and neutral results, Holmes said this complicates how business leaders approach diversity.

“Do we want to be that type of people where we are looking at people in terms of dollars and cents…what’s the story we’re going to tell people?” Oscar Holmes asked.

Holmes observed the disparities in the healthcare system firsthand when attending one of his mother’s doctor appointments. As an educated scholar with a Ph.D., he noticed severe differences in how the hospital staff interacted with his mother, an older black woman.

“Just seeing how practitioners worked with her or treated her or talked to her was much different than when I started talking to them. There was an immediate change,” he said.

“So my point with healthcare and diversity and a human approach is I shouldn’t have to come from New Jersey to Virginia so that my mother can get equitable healthcare treatment. None of us should do this.”

Holmes acknowledged the strides hospitals have made to increase diversity among their staff, but he said there should not have to be people of color working as physicians and nurses in a hospital in order for people of color to receive adequate healthcare treatment.

“You shouldn’t have to have an African-American physician to get adequate healthcare. Every physician should give everyone superb healthcare coverage,” he said.

Following the first panel, keynote speaker Dorothy Roberts delivered a talk titled, “Race, Medicine, and Justice.” Roberts, a professor of Africana Studies and Director of the Program on Race, Science and Society at the University of Pennsylvania, has published over 100 essays and her TED Talk titled “The problem with race-based medicine” has over one million views.

Roberts opened her presentation with research from the 1990s which found that black women in Chicago were more likely to have breast cancer. However, the research indicated that black women were not suffering from poor health, but that white women were surviving more as a result of the better healthcare they received.

Roberts argued that the inequities of healthcare date back to the invention of racism, which ultimately permeated the field of science.

“The medical profession was very influential in supporting this idea of natural races that were biologically distinct from each other by claiming that they could observe differences in the health of different races that they said was innate in those.”

She exemplified this through Samuel Cartwright, a physician who was commissioned by the Louisiana Medical Society to write a report titled, “Diseases and Physical Peculiarities of The Negro Race” in 1851. In his report, he argued that black people possessed lower lung capacity than white people; therefore, they must work as slaves in order to sustain healthy blood flow.

He went as far as to argue that enslaving black people and forcing them to work on plantations made them freer and healthier.

To the astonishment of many, Roberts said medical students to this day are taught to observe a patient’s race and align their symptoms with their race. Medical assumptions like these can severely affect how doctors and physicians diagnose people of color.

“We might think of Samuel Cartwright of having some antiquated thinking, but his thinking has continued generation after generation in medical schools to this very day, and this is actually how most doctors practice medicine in America,” Roberts said.

Based on health trends of a specific race, doctors may be quick to diagnose patients based on assumptions rather than looking further into their individual health issues.

Just as Cartwright falsely reported that black people had lower lung capacity, Roberts explained that there is a recurring opinion in the medicine field that labels black people as possessing higher levels of muscle mass, which can be a deciding factor in determining a patient’s eligibility for organ transplants.

“There’s so many cases where there’s this automatic kind of diagnosis and measurement that’s different by race simply because of a categorical assumption about how people’s bodies work because of their race,” Roberts said.