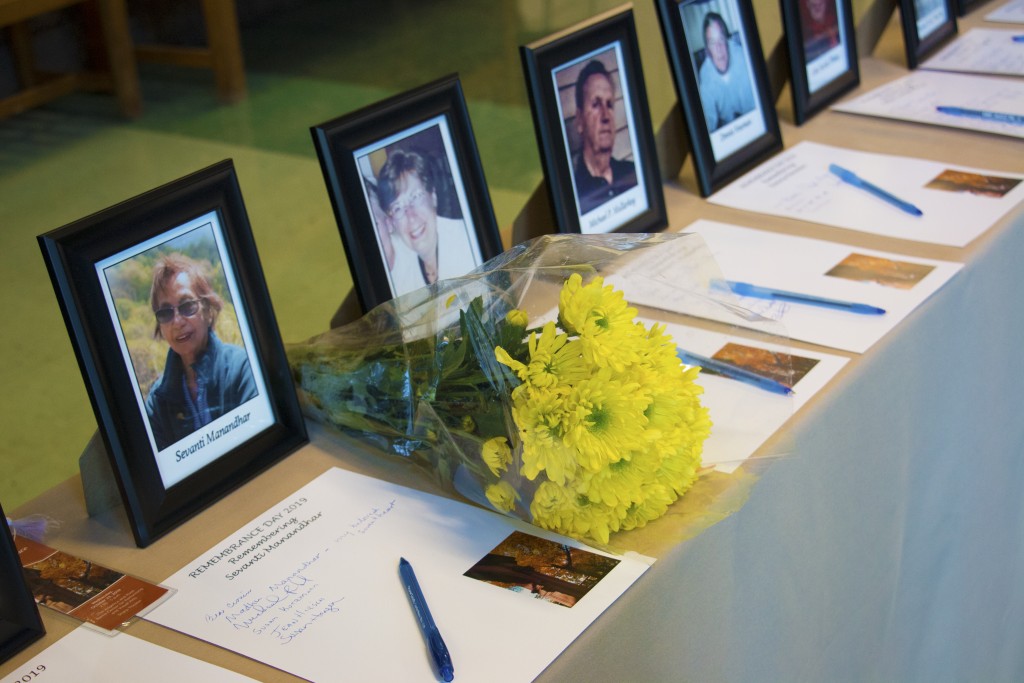 Family, friends and faculty gathered in the Berrie Center for Remembrance Day on Wednesday to honor the lives of members of the Ramapo College community who have died. Led by President Mercer, Remembrance Day gave people an occasion to reflect on their loved ones’ relationship with Ramapo College.

This year’s 31 honorees included students, benefactors, staff and faculty members who passed away in 2018 and from January to June 2019. This year marked the loss of founding faculty member Joseph Johnson, founding staff member Virginia Page and benefactors Robert B. Hiden Jr. and Francis J. Rodriguez.

In the lobby of the Berrie Center, a table featured photographs of each honoree along with a piece of letter paper for guests to sign their name and leave a personal message.

As people took their seats in the Sharp Theater for the Remembrance Day program, President Mercer welcomed everyone and reflected on the history behind Remembrance Day at Ramapo College.

Remembrance Day is an annual event established by the Ramapo College of New Jersey Board of Trustees in 2005 to “memorialize the death of members of the campus community and outside individuals who have significantly contributed to the institution and to the campus community,” according to Ramapo’s website.

“Our honorees include students, benefactors, staff and faculty members, each of whom have made the College richer by their contributions and their presence, which we now cherish in memory,” Mercer said.

People were invited to send in personal memories and photographs for the Remembrance Day program during which President Mercer and Donna Singer, executive board member of Ramapo College Retiree Association shared heartfelt memories of each honoree and cited their contributions to Ramapo.

He invited people to stand during the remembrances of honorees they knew personally and asked people to remain standing after the conclusion of his anecdotes for a moment of silence. “Your presence and participation today honors these special members of the College,” President Mercer said.

Following the reading of the honoree names, Professor Gilad Cohen played an emotional instrumental piano piece on the Sharp Theater stage. A processional scored by bagpipe music led people to Memorial Grove where people were invited to water the new tree planted at the bottom of the sloping hill. A crowd of family and friends gathered around the base of the new tree to take pictures and view the plaque sitting atop its soil that commemorates the 31 honorees.

People were invited to read the “Tree Side Ceremony Meditation” printed on their Remembrance Day pamphlets which poetically captures how the tree will be viewed and remembered during each of the four seasons.

The final stanza of the meditation reads, “Throughout each year as the tree we have planted grows, we will remember you.”

After the formal ceremony concluded, people remained outside to take in personal moments of silence and admire how the newly planted tree stands among the other trees that grow in Memoriam.