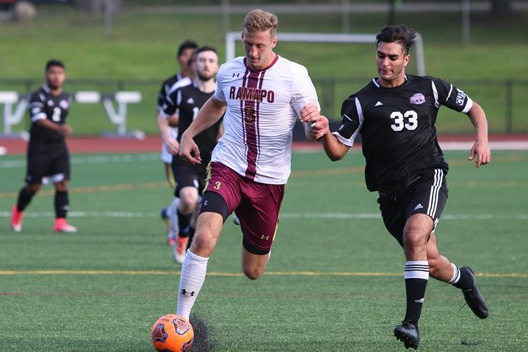 The team played at home against Rowan University, and both teams stood similarly in conference standing: a battle for first and second place. However, with the Roadrunners’ 2-1 win, Ramapo remains at the top, improving their totals to 10-1-5 overall and 5-1-2 for the New Jersey Athletic Conference.

The game felt like a chess match; nothing interesting occurred in the first half as each teams’ defense acted strongly against each other. However, by minute 75, it was clear that Joseph Fala would be the king left standing.

This was when Fala scored the first goal for his team: a long ball off of freshman defender Mark Buckel. The ball slipped past the determined, diving Prof goalie (James Weinberg) which brought the Roadrunners on the scoreboard, 1-0.

However, the Profs were not going to lose without a fight.

Rowan’s first and only goal of the game would be one of skill as it consisted of much trickery by Nick Schlageter to quickly pass the ball backwards to teammate Jay Vandermark, scoring the ball as it flew passed Ramapo’s junior goalie Joshua Schaffer.

This only occurred a mere four minutes after Ramapo’s goal, tying the game at 1-1.

With just over three minutes left in the game, a golden opportunity was painted for the Roadrunners: senior midfielder Nick Petrozziello was fouled inside the box. It was then when Fala stepped to the line and sealed Ramapo’s dominance, finalizing the score, 2-1.

While Rowan did receive three corner kicks over Ramapo’s two, the Roadrunners had more shots in total, barely making it at 11-10.

Goalie Joshua Schaffer especially shined in the last few minutes of the game; the most crucial moments. Schaffer exceeded saves compared to Rowan’s goalie with four saves during the game (Prof goalie James Weinberg left with three), and he was an essential element towards Ramapo’s rein.

After this win, the New Jersey Athletic Conference took note of Joseph Fala and Joshua Schaffer’s efforts on the field as they were both declared the division’s “Athletes of the Week” title.

Wednesday’s game against William Paterson University will mark the final NJAC game of the regular season. The Roadrunners will then go to take on the first round of the NJAC tournament on Saturday, Nov. 2.