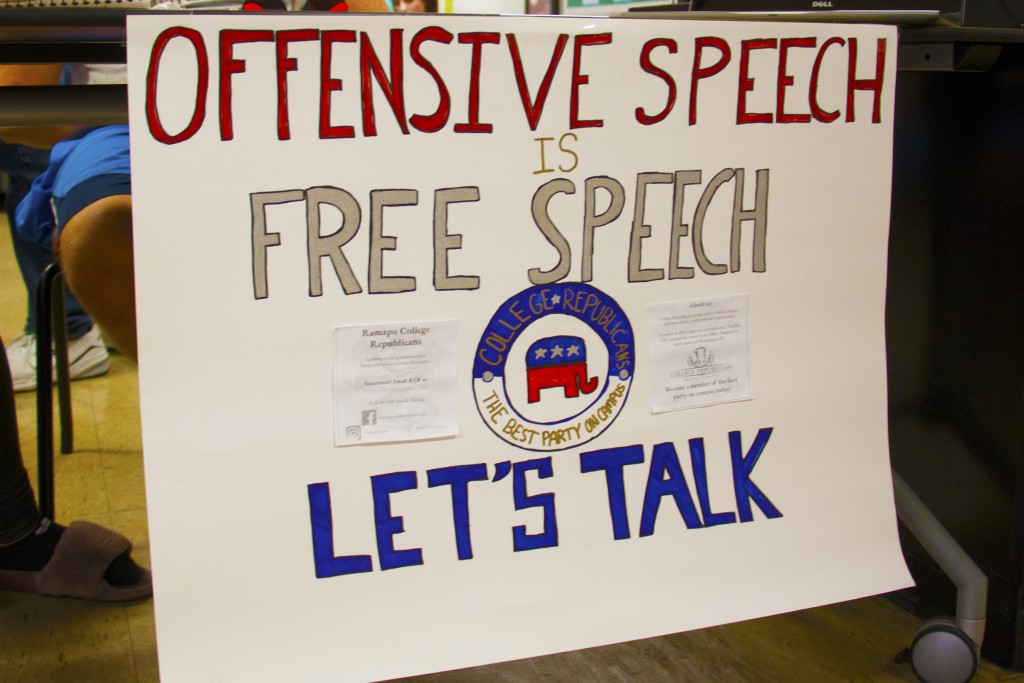 The Fishbowl was full of passionate students on Tuesday afternoon as two parallel tabling events took place. On one side, quite literally, the College Republicans hosted their event “Offensive Speech is Free Speech,” and on the other, the Women’s Center and LGBTQ+ services hosted “Importance of Inclusive Language.”

The latter table event was made in direct response to the former. However, the events operated under different purposes.

“Our table today is about promoting the importance of inclusive speech,” said junior Kirby Steele (he/him/his). “I think it kind of goes to show it’s all well and good to have uninhibited speech for a healthy discourse of ideas, but at the same time, if you’re not keeping that speech — that discourse — mutually respectful, then it’s going to be hard to take one another seriously in that discourse and feel like your ideas are being valued.”

“We believe while people need a moral compass, and they should use it, that people who don’t should not be put in prison,” he said.

At the “Inclusive Language” table, volunteers offered students information about common microaggressions, which are indirect phrases which stigmatized groups of people, and how harmful they can be.

“We want to put a stop to common phrases that are normalized, but are actually microaggressions,” said freshman Jordan Conklin (she/her/hers).

Their table offered examples of common hurtful phrases that are frequently used. They also offered students a variety of flags, contraception and buttons to write their preferred pronouns onto.

Student volunteers for the Women’s Center also noted how important inclusive speech is when it comes to respecting LGBTQ+ students.

“We need to keep in mind that we are not just here to support women, but we’re here to support everyone who is a minority group,” said sophomore Bek Woolery (he/him/his). “In that way, we need to be able to step out of our comfort zone and advocate for people who need that inclusive language.”

Hardly anyone who walked by could help but engage, asking about the purpose of the two tables. While the “Inclusive Language” advocates offered cookies and suggestions on making speech more considerate, the “Let’s Talk” event across the way offered the opportunity for an open debate of ideas.

Both sides could agree that having the freedom to speak one’s mind is a right American students should be proud to have. However, some students had concern for the intentions of the College Republicans table.

“I know a lot of people are worried that we’re trying to be mean to people, but I don’t think morally we should call people names or stereotype names,” said sophomore Justine Aiosa (she/her/hers). “But I feel like people need to understand that if your speech is taken away you can’t express yourself or be who you want to be.”

Members of the College Republicans stressed that they were not there to promote the use of offensive language, but to remind students about the full extent of free speech. Pillari expressed their concern for students who may not have what they consider a full understanding of the importance of their right to free speech.

Some statements made the event’s purpose slightly confusing, like when they offered the idea that offensive speech or hate speech shouldn’t be prosecutable, which it isn’t. Only when speech incites violence does it lose protection, but Pillari did acknowledge this.

Several students took the seat offered at the table to engage in debate and Pillari noted the most common topic they debated on was the definition of offensive versus threatening speech.

“Anything that incites violence should be banned, things like harassment should be banned,” he said. “However, someone saying something mean shouldn’t be criminalized, unless, again, it starts an attack on someone personally.”

He referenced this point to a study which he described as showing that 50% of millennials and Gen-Z members do not understand the right to free speech and want it altered.

The study in question is a 2015 Pew survey which reported that 40 percent of millennials agree that the government should be able to limit free speech to exclude language offensive to minorities.

“From a purely legal standpoint, [offensive language] shouldn’t be banned,” Pillari added. “We should be using our moral compass, but we shouldn’t be imprisoning people who don’t.”

Ramapo offers an open space for discussions like these to be happening in the same room, which is important to students who might still be forming opinions. Kirby Steele noted how important it is to have inclusive language in such a diverse space.

“Education, especially in an environment like this, is a very social experience,” Steele said. “As with any function of society, feeling as if your presence and your voice matters allows you to perform better within the institution.”

Both tables encouraged students to be aware of the power of language, reminding them that they are in a position to speak freely, but perhaps should do so carefully.

Regardless of which side they stood on, it is important that students are using their voices to engage in open discourse on such prominent topics. Creating open conversation on campus gives every student the opportunity to cast out indifference and advocate for their beliefs.

All students quoted were asked for their preferred pronouns for the purpose of inclusive language in this article given the subject matter.