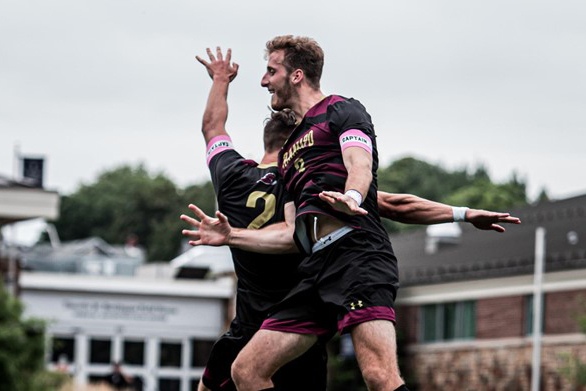 Ramapo College’s 2019 men’s soccer team wrapped up their regular season last Wednesday, Oct. 30, with a conference victory against William Paterson University, 4-0.  As a result, the team was crowned New Jersey Athletic Conference regular season champions for the first time ever in program history.

The final home victory of the regular season bumped the Roadrunners’ overall record to 11-1-5 and 6-1-2 in the conference, the program’s best. This earned Ramapo the #1 seed in the NJAC Tournament.

The Roadrunners were able to steal the game pretty early on, showing up to the pitch ready to close out their season with a win. Senior Nick Petrozziello scored what would end up being the game-winning goal at 8:00. Senior Ariton Mimini contributed the assist to Petrozziello who headed the ball into the back of the net, collecting his third goal of the season.

Less than a minute later at 8:53, Petrozziello crossed the ball from the corner into the box, where senior Joseph Fala received it and capitalized off a missed play by William Paterson defense to record his 14th goal of the season.

The Roadrunners held the advantage in shots for the half, posting 12 while the Pioneers attempted only one.

The second half played out scoreless until Fala struck again at 87:25 to give Ramapo their final goal of the regular season.  The assist was put out by senior Bashkim Saiti who passed across the box so that Fala could sneak one under the William Paterson goalkeeper.  The clock ran out and Ramapo finished in the lead, 4-0.

The Roadunners led in shots again in the second half, 14-5.  For the game, they also led in shots on goal recording 16 to the Pioneers’ four.  The advantage was even given to Ramapo in corner kicks as they were rewarded 11. Meanwhile, William Paterson only received three.

Goalkeeper Joshua Schaffer had a slower afternoon as the game was mainly dominated by the Ramapo offense.  He tallied four saves in the net after 90 minutes.

Fala contributed the team high of six shots, three on goal, and two scores.  He also put out an assist. Petrozziello was right behind him posting five shots, all on goal, and recording the remaining two goals for the team. Justin Charkowski, Raul Macedo and Saiti all collected three shots each.

The first round of the NJAC tournament took place on Saturday, Nov. 2, where the No. 4 seed Rowan University defeated the No. 5 seed Kean University. Since Ramapo finished the season at #1, the team received a first-round bye in the tournament and are headed straight to the semifinals where they will face #4 Rowan University.

Ramapo already defeated Rowan once this season in a 2-1 victory on Oct. 26.  The semifinal game will take place at home on Nov. 6 at 1:30 p.m. If the Roadrunners win this match, they move onto the championship round of the NJAC Tournament.