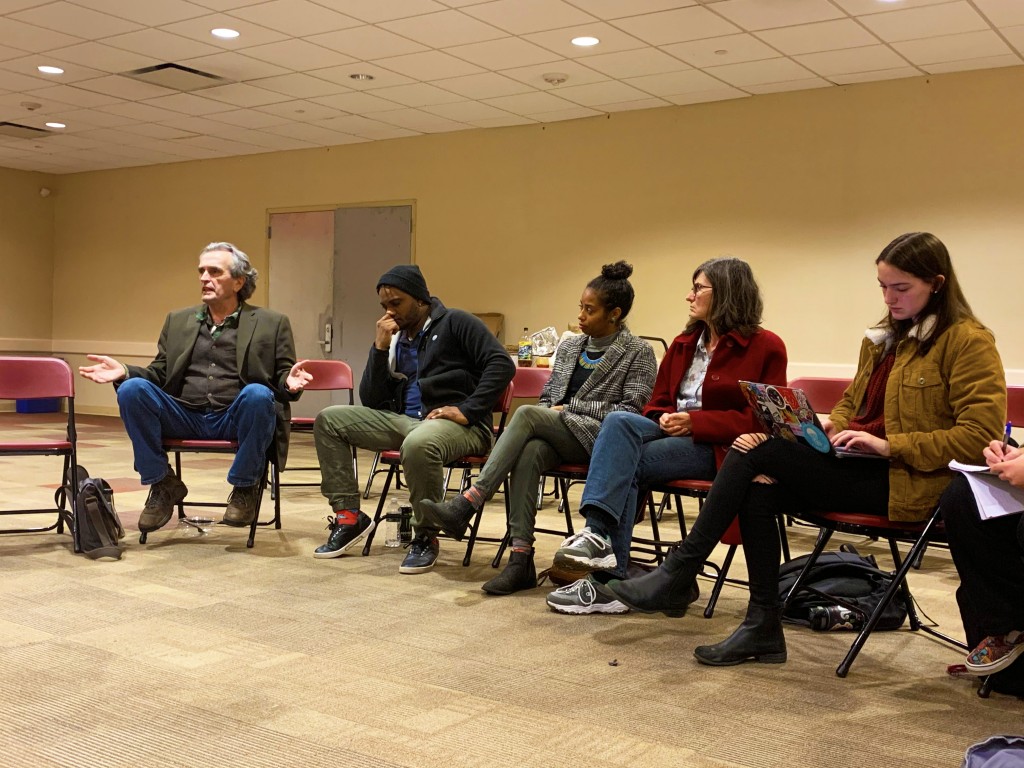 1STEP invited two speakers to the Alumni Lounges on Monday night to discuss how environmental racism has impacted the Ramapough Indians living in the Ramapo Mountains.

The discussion featured Dr. Chuck Stead, a Ramapo professor who recently wrote a book titled, “Get the Lead Out,” and Two Clouds, a member of the Ramapough tribe and a Ramapo student.

“There are Ramapough children to this day a generation down the road who have suffered from both epispadias and hypospadias. I would call that a crime,” Stead said. “You can say ‘That’s not a crime, the industry didn’t know’ That’s nonsense…They knew full well that it had impacts on life.”

Growing up in Hillburn, Stead spent much of his childhood in the woods while trapping animals and camping. He discovered that much of Ford’s dumping took place at night, even burying the toxic sludge in the ground.

“I realized this is how the world operates: the people who make the stuff never have it dumped near them…but a bunch of them stand at a distance,” he said.

Two Clouds made a similar observation when the Dakota Access Pipeline was planned to run through Standing Rock Reservation in North Dakota.

“The Lakota tribe, they were fighting this pipeline that was rerouted from the town of Bismarck, North Dakota, which is a predominantly white town,” Two Clouds said. “The residents didn’t want this oil pipeline to go in their town because of the effects it would have if it were to leak…The pipeline was rerouted into the Indian reservation.”

To bring awareness to the pipeline construction, Ramapough Indians set up Split Rock Sweet Water Prayer Camp in October 2016 to stand in solidarity with Standing Rock. During that time, Two Clouds said the president of the Ramapo Hunt & Polo Club Association allowed them to use an electrical outlet on the property, which they did for about a month.

On Nov. 24, Two Clouds said detectives and more than 10 police and squad cars came to their land to investigate the land surrounding the electrical outlet.

“They had us all on the fence like we were criminals on our territory and our crime was stealing electricity to charge our phones,” Two Clouds said, adding that the person who called the police was the person who said they could use the outlet.

Following this incident, police frequented the land two or three times each day for about a month, which caused paranoia and a lack of sleep for Two Clouds during that time. The long-term effects triggered more serious health problems for the 27-year-old, including chronic anxiety and high blood pressure.

Stead and Two Clouds explained that the environmental injustices that took place on the Ramapough Indians’ land is rooted in a broader systemic issue that equates the land and homes of marginalized communities with lower health standards.

Two Clouds also addressed the recent water crisis in Newark due to lead contamination. As a resident of Newark, a city with a 49 percent black and 36 percent Latino population, he said the quality of water has always been low because the government never reinforced the replacing of the city's lead pipes.

The rising cost of rent due to newly constructed apartments in Newark has displaced black families who have lived there for generations, according to a study by City Lab.

Until this gentrification occurred, there was no serious concern about the water quality in Newark, Two Clouds said, adding that some people believe the lead may be coming from the Ramapo River.

Toward the end of the discussion, senior student and 1STEP president Lily Makhlouf asked what students can do to combat environmental racism. Stead encouraged everyone in attendance to continue to engage in conversations about how environmental racism impacts people's livelihoods and threatens our natural resources.

“Keeping the dialogue going is so important,” Stead said. “If you do nothing else after tonight, then talk about what you’ve heard here tonight to other people–any other people–the story then continues. The story dies if it’s not told.”