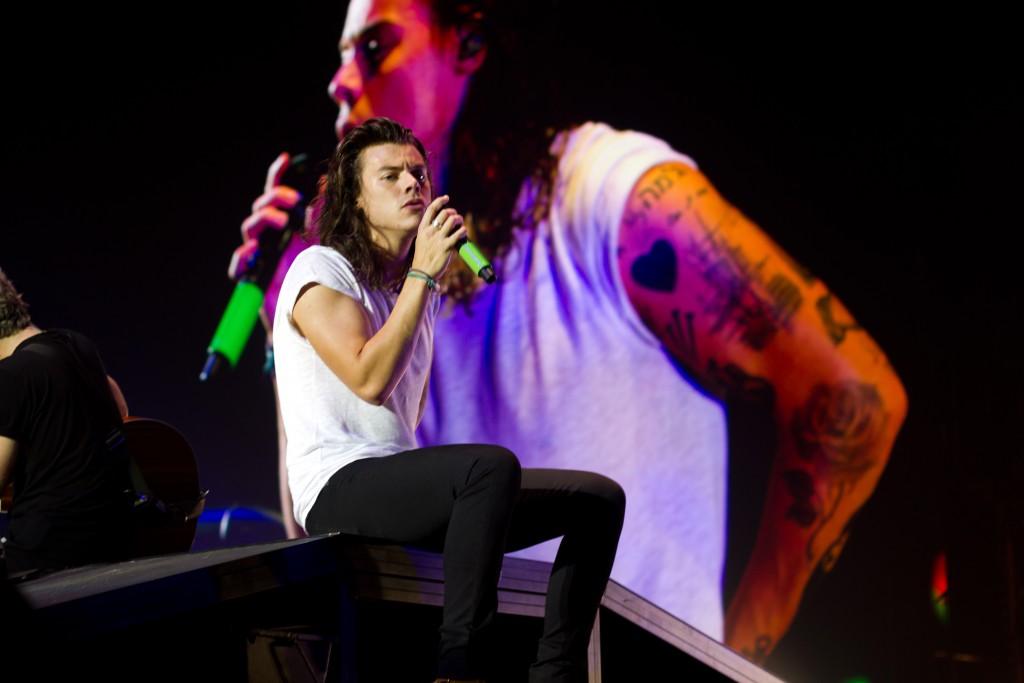 As the clock struck 11:30pm in the Big Apple, fans all over turned their TVs to NBC to watch Harry Styles take on double duty on “Saturday Night Live” as this week’s host and musical performer.

After their first album’s release and success, Styles performed with his former band One Direction in 2012. They were the musical guests, singing their hit songs “What Makes You Beautiful” and “One Thing.”  They also performed in the skit “The Manuel Ortiz Show” as Sofia Vergara’s children. They were later musical guests in 2013 and 2014, along with appearing in another sketch, “Girlfriends Talk Show.”

Once Styles began his solo career, he performed as a musical guest in 2017 with his first single “Sign of the Times” and debuted his second single, “Ever Since New York.” He also appeared in two skits alongside host Jimmy Fallon.

It is clear Styles has weaved his way into the hearts of 30 Rock, and fans were overjoyed to hear that their idol would be returning to the show on Nov. 16.

The timing was perfect for Styles, since his latest single, “Lights Up,” was released on Oct. 11 and he recently announced both his second album, “Fine Line,” out on Friday, Dec. 13, and his world tour. Hosting SNL was a major factor in the continuous anticipation for this new era of Harry.

The episode was filled with many memorable moments, and the crowd – in NYC and at home – were more than pleased.

Starting with the iconic monologue, Styles brought color, spunk and lust to the stage. His main focus was stressing the fact that he is “a serious musician.” His priorities are “music, then fantastic hair, then comedy, then family, then friends.”

His monologue was subtle and not as outgoing or challenging as some hosts may choose to do, but the simplicity worked to his advantage. Some jokes were a bit dull, but many stuck with the fans.

He then proceeded to mention how much he loves the guys from One Direction: they are his brothers. However, fans were surprised when Styles named the members of 1D and alluded to former member Zayn Malik quitting the band, referring to Malik as “Ringo,” who was the first to leave The Beatles.

Some fans took this as a negative action on Styles’ part, but it was ultimately a joke and the singer’s way of connecting to his fans and their constant mentions of both a One Direction reunion and talk of Malik.

As far as the sketches, Styles did perform in entertaining ways, but the writers could have given him better material. His characters were all pretty quiet, awkward and reserved. This is not a terrible choice for some skits, but it became a bit overdone as the episode progressed.

However, some of the sketches were quite outgoing, one particularly being the last skit of the night, “Funeral DJs.” Along with cast member Chris Redd, the duo came to a family’s funeral to perform in honor of the lost loved one. The two were clearly a spoof of the outdated duo, LMFAO, credited for their hit song “Party Rock Anthem,” as they were dressed in outrageous outfits and sang upbeat songs that were not particularly appropriate for a funeral. Ending the skit, to fans’ delight, the duo ripped off their pants, exposing their underwear stating “R.I.P” and “Betty.”

Styles successfully executed the role as the host, and his performances were also breathtaking.

First, Styles performed his single “Lights Up” in an acoustic/gospel-like fashion while in a glittery jumpsuit. The performance was a beautiful take on the hit song, yet it still held true to its origins.

The best moment of the whole night was undoubtedly Styles’ debut of his new single, “Watermelon Sugar.” Styles briefly mentioned his new song in a tweet on Oct. 22, stating, “Kiwi walked so Watermelon Sugar could run.”

This tweet put fans in a spiral, and the song’s iconic release was not a disappointment.

“Watermelon Sugar” is a fun and summery song with easy and breezy lyrics. It has ultimately helped set the tone for his new album, and fans “just wanna taste it.”

Harry Styles has yet again proved himself as a musician and performer, and his fans are all glad he has taken things to the next level with SNL.