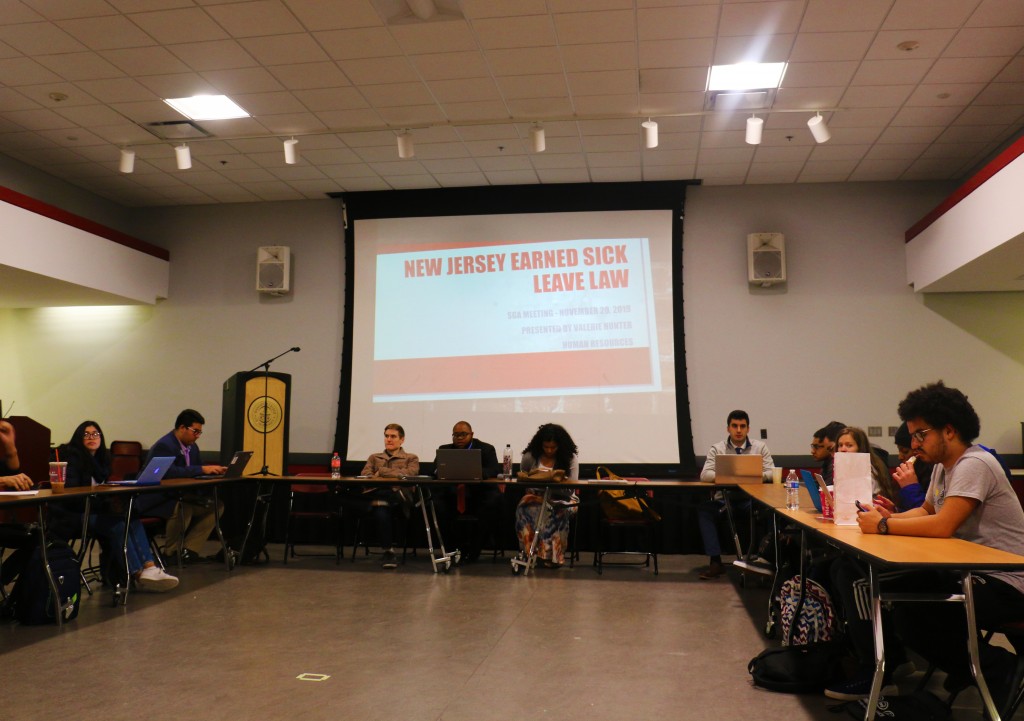 Monday afternoon, every Ramapo student employee received an email informing them of New Jersey’s sick leave benefits that were enacted in October 2018. The email suggested that students attend the Student Government Association meeting this Wednesday afternoon at 1 p.m.

This meeting involved a presentation from Ramapo Human Resources representative Valerie Hunter which explained the benefits and guidelines of the law. The basics are that any employee of the school who is not full-time or tenured is entitled to an hour of sick time for every 30 hours they have worked since the enactment of the law.

Students have been buzzing as the news has come to the surface that this benefit has been available long before Ramapo notified them.

Hunter took a myriad of questions from student employees, staff and student senators alike, all of whom were confused about the exact reason this has only just become a topic of formal conversation.

SGA President Stephan Lally noted the issue of reporting this information so late after the fact.

The sick leave law states that accrued sick time cannot be used until 120 days after employment, or 120 days from the enactment of the law for already present employees. This means that students have been unaware of their right to sick leave usage since Feb. 26, 2019.

Students and staff alike were concerned, wondering why a notification was not made sooner and what would be done for students who no longer work for the college or have graduated.

“Does it matter that Ramapo College of New Jersey… was more than a year late,” asked Assistant Director of Ramapo's Civic and Community Engagement Center, Karen Booth. “If it does, what do we do?”

Hunter took full responsibility for the delay of the notification. She explained that the college has been working to create an effective, automated system for student employees to track their earned sick time and request use of it, but they have not been able to perfect it quite yet.

“In the effort to get it right, we dropped the ball,” she said. “This is just the first step, we’re not finished.”

Though no automated system is in place, she said in the interim the staff has manually calculated accrued sick time for all employees of the college who will be affected. This includes students who have graduated, who Hunter said they will be reaching out to in order to offer them the opportunity to retroactively apply their sick leave.

Students can find out how much sick leave they have accrued and request to use it by emailing sickleave@ramapo.edu, which is the only system that currently exists for the process.

Hunter and the rest of the college cabinet are hoping to remedy the situation after this first meeting by moving forward with more open communication about sick leave. Still, students and staff alike were not happy with the results of a year’s worth of ignorance to their rights.

One major concern from those in attendance was how students could be compensated for the time they have taken off without pay since February. Hunter described that the only thing that can be done is for students to email in with the time they missed and ask to use sick leave, but how their time will be verified is unsure at the moment.

“A moment like this really does not add luster to a Ramapo College education,” said Dean of Students Melissa Van Der Wall. She also shared budgetary concerns as staff advisors were unaware of the sick time they will now owe their employees, especially coinciding with the issues they are experiencing from budget cuts.

Following the session, many questions were still unanswered, including how sick leave will impact contractual employees like those in Residence Life, how retroactive leave will be compensated and why the college failed to notify students for so long.

Though Hunter accepted full responsibility for the delay of the information for a proper system, some were less than thrilled with this answer.

“If this had been a priority… it would have been done,” said Booth. “I think the cabinet should bear full responsibility.”

As Valerie Hunter said, this is only the first step in what will surely be a much longer process as Ramapo works to remedy lost time. Now that they have been notified, students can apply their right to sick leave retroactively and in the coming semesters.

This process will also be applicable to college employees like adjunct professors and any other hourly employees. As the college works to find a more efficient system to track and use sick leave, they will also keep information posted on the Human Resources tab of Ramapo’s website.

Still, concerns will stand about the issue’s untimely notification causes for hourly employees of the college and further information about how different offices will be affected now that the conversation has begun.