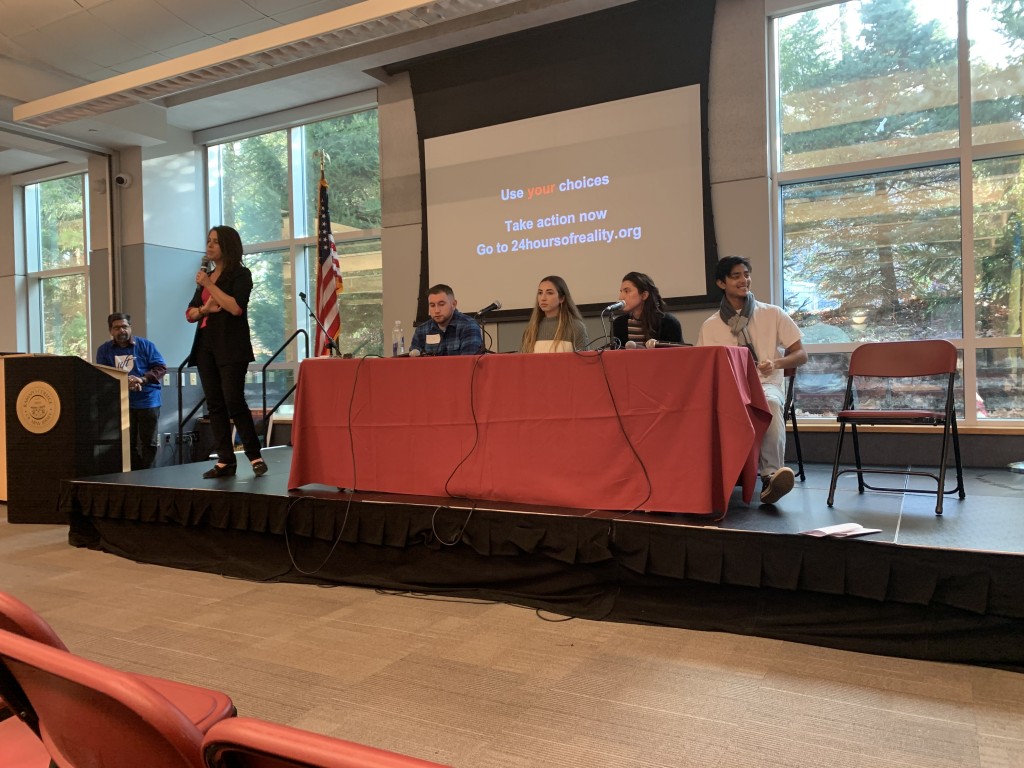 Ramapo College hosted an all-day event to tackle the subject of climate change.

Held in the Trustees Pavilion on Nov. 20, the event, “Confronting the Climate Crisis: Ramapo’s Reckoning with Reality,” featured speakers such as First Lady Tammy Murphy, Samantha DiFalco of the Sunrise Movement and Rachel Lee of Zero Hour and the American Youth Climate Movement.

The second half of the event began with a talk by professors Harriet Shugarman and Ashwani Vasishth entitled “The Prospects for 2030: Inhabiting a 1.5- or 2-degree C World?”

“We’re having bigger anomalies, more of those bigger rainstorms and snowstorms,” said Shugarman. “It’s all kind of extreme weather events increasing around the world.”

“With these extreme weather events, we see destruction around our state and our country,” she continued.

Another impact of the warming climate is more droughts alongside fires, with South Korea, California and Australia being mentioned.

Droughts cause rises in food prices, as well as fertile land, such as in Syria, being turned into desert. The yield for key crops, such as corn, rice and soy, decreases alongside the nutritional value.

Those who are the least responsible are the most impacted and directly, such as poor and homeless people, Shugarman stated.

“The solutions are the easy part,” Vasishth said. “We know the problem. What to do about it is the question.”

He noted that countries have made real progress in the past 10 to 15 years. The 2000 projection of green energy progress sought to have worldwide wind capacity to reach 30 gigawatts by 2010 – in reality, that goal was exceeded in 2018 by a factor of 20.

Vasishth connected it back to Ramapo: at peak, the panels in the parking lots provide five gigawatts of electricity. They only need to generate 2.5 gigawatts minimum.

There is enough clean energy to provide for the world given that legislation is implemented to make it happen, as wind and solar are the most cost-efficient solutions to implement.

“The issue is not should we switch to renewables, but what is keeping us from switching,” Vasishth said. “As you think about these issues, think about what it means to take action in the real world.”

“What bugs me the most is that no one is talking to the coal miners about a transition plan for what comes next,” he said. “This is why you should be talking about the Green New Deal.”

“The system will flip when we collectively say it must. and when we do, it will flip quickly,” Vasishth said.

“We can make a difference no matter what we do, if you’re a vegan or a meat eater, there’s different ways to do the same thing,” he said.

Students in Shugarman’s Climate Change and Society class sat on a panel following the speech, speaking about how climate change has impacted their lives.

“I felt angry at the generations before me,” said junior Meghan Macalle. “I felt guilt because I could still enjoy my luxuries while other people couldn’t. I decided to change my major to environmental science. I want everyone to be able to enjoy the beauty the earth has to offer.”

“I’ve always felt the impacts of climate change, whether I knew it or not,” said junior Pravash Rajbhandari. “Water scarcity is at the forefront of any disaster.” He spoke further of fears of water rationing alongside other consequences.

“I’ve noticed how a lot of people come together after a disaster like Hurricane Sandy, but it shouldn’t take a major disaster for people to take action,” said senior Jaclyn Dericks.

Jarrett Jirak, self-described super-super senior, recounted his experience of Hurricane Sandy, where his mother called him to come home and he spent the night boarding up the house with his mother.

“It was the last time I ever saw that house,” he said.

It changed the course of his life, and though it took him several years to return to school, he decided to major in environmental studies so he would be able to provide solutions to people.

“We can come together and work on ways to build those solutions.” Shugarman said.