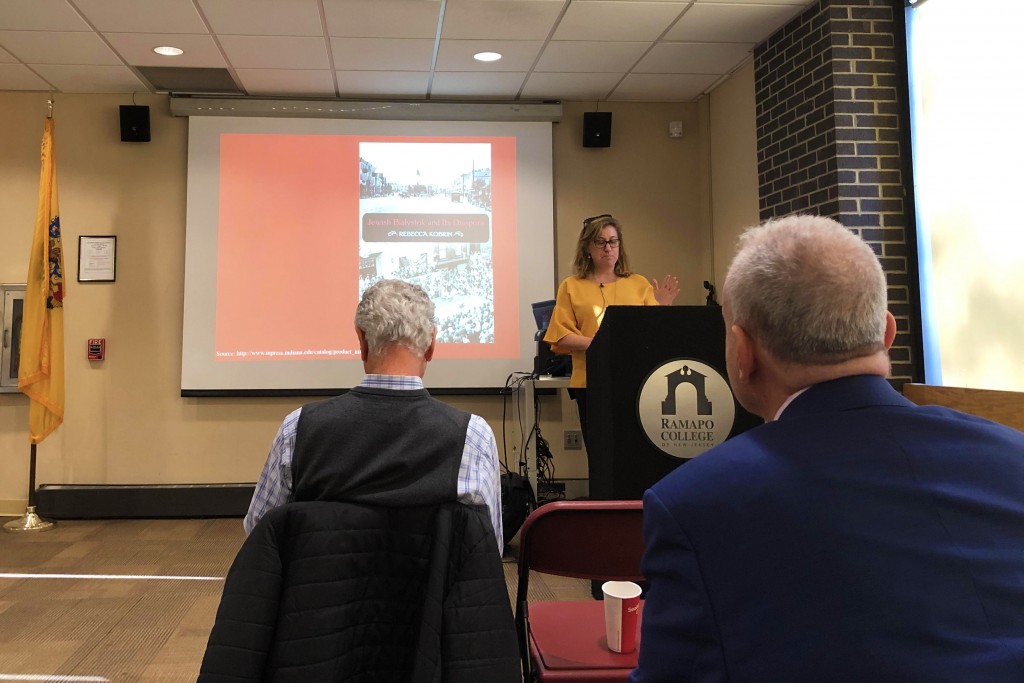 Professor Rebecca Kobrin of Columbia University and Harvard, focusing on American Jewish History, visited Ramapo College last week to speak about her new book, "Images Myths and Realities of the Jewish Diaspora," an event that was hosted by the Gross Center for Holocaust and Genocide Studies.

Students and members of the public listened intently as Kobrin began her lecture on East European Jewish people in the age of mass migration after WWI. Notably, her works have been featured in the Washington Post, CNN and the Guardian News.

“My specialty is American immigration,” Kobrin stated as she described “80 percent of [Jewish people] in the US are immigrants.”

Kobrin also highlighted how Jewish people saw themselves in identity with the town they were from, meaning they had a local identity, not a nationalist one, from 1835-1917.

During their diaspora, there were two ways Jewish people understood it: either it was completely voluntary or they were being forced.

In 1795, there were one million Jewish people who were suffering from a lack of economic opportunity, whereas by 1897, there were five million who had moved from the countryside to big cities, finding a place to thrive in the midst of hardship.

One common theme that Kobrin found within her study was that migrants have always felt a sense of longing for what they left behind, even if the conditions were not ideal.

“We often don’t think about Jews’ entanglement to home because of what happened in WWII,” she stated.

From firsthand accounts Kobrin quoted Jewish people who said they suffer from the most acute homesickness because they wander aimlessly.

Here, the term “wander” is derived from the Hebrew language meaning “to be forced to leave.” For Jewish people, the word “wander” often defines their life, conveying a certain sense of loss.

Kobrin focused her attention on one man in particular who had a huge impact during the time of Jewish diaspora. David Sohn was a journalist and founder of a fundraising organization to raise money for the city of Bialystok after WWI, which was completely destroyed.

The region itself was devastated. Buildings were destroyed and the people were left to hunger and starvation. Sohn provided funds for the city to be rebuilt and visited several times, hiding money under his coat to give to the Jewish people of the city.

Through his efforts, he raised and donated what would be equivalent today to almost $9 million, which had an enormous impact. In a span of five years, he visited over 20 times to aid the people of Bialystok.

Kobrin pointed out that during this time, Jewish people asked for help from their family and friends in America. Through organizations like the one Sohn founded, there was some amount of relief and Jewish people found a way to remain connected to each other by their supporters in America.

One thing students can learn from this time period is to reach out to others in their time of need, to give by any means necessary, such as time, money, or simply a listening ear, to help restore hope in humanity.