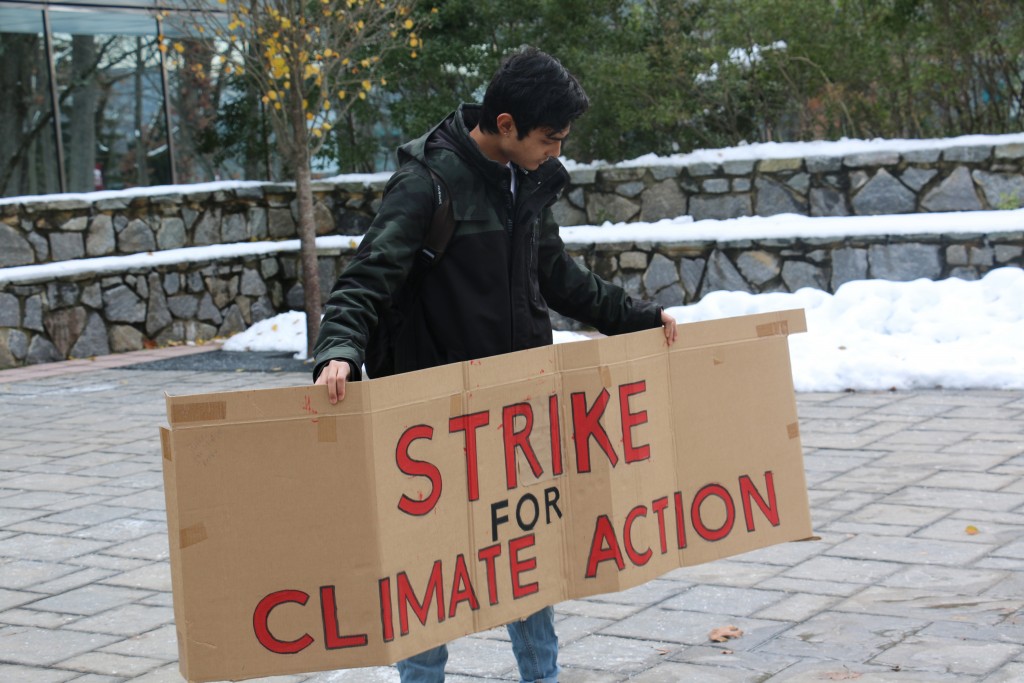 Students and members of the Mahwah community gathered around the Arch, on Friday, Dec. 6 to protest climate change led by Professor Edelstein, who is the Director of the Institute for Environmental Studies. Several students spoke to the crowd, addressing the growing concern of climate.

“One of the most important things we can do is localize our food,” said senior Eric Williams.

“Start your own garden,” he urged. “The shrub layers in our forest in New Jersey are barren, so we need to plant more shrubs, that will help with carbon sequestration among other things. There’s endless things we can do in our everyday life.”

Another student, Brenna, who studies environmental science, shared her words of gratitude, “I just wanted to say that even though the circumstances of why we are here are bad, it’s so good that we are all here together right now.”

“Being aware and making other people aware is the only way that we are going to get the change that we want to see,” she said. “This is our home, and the only one that we have. We just need to work together. It’s going to be hard to get where we need to be, but things like Fridays for Future and speaking our mind, that’s the only way there’s going to be true impact.”

Fridays for Future is a global movement begun by Swedish youth activist Greta Thunberg. Every friday, thousands of schools across the country go on strike to protest climate change. Thunberg is most notably known for her condemning speech as she addressed the United Nations in December of last year. Thunberg was named Time's Person of the Year this week.

Natia, a senior studying social work, addressed her concern of not knowing how endangered we really are.

“I really try my best to limit my plastic water bottle use and just doing stuff at home and in my life to make a difference,” she said.

The overarching message of students was to find ways in daily life to make a small differences because they will ultimately have a huge impact, and the crowd cheered them on.

Several attendees held handmade signs which stated slogans such as “It doesn’t take a stable genius to know there is no plan B,” and “Ignorance is not an environmental policy.”

As climate change continues to be a grave concern among young people in particular, colleges and schools will continue to protest and speak out until their demands are met and they begin to see the change they desire. The main message of climate change protests has been that change starts with the individual.

“It’s really scary to think about the future,” said another speaker at the climate protest. “A lot of people might feel like there is no hope. But, to see everyone here today, standing and listening to the words im saying is definitely a good feeling. Just finding small ways each day to try to talk to people about what you're buying, what you're eating, what you’re doing is a great start.”

“Just realize your voice carries a lot of weight,” he said. “So, never be quiet.”