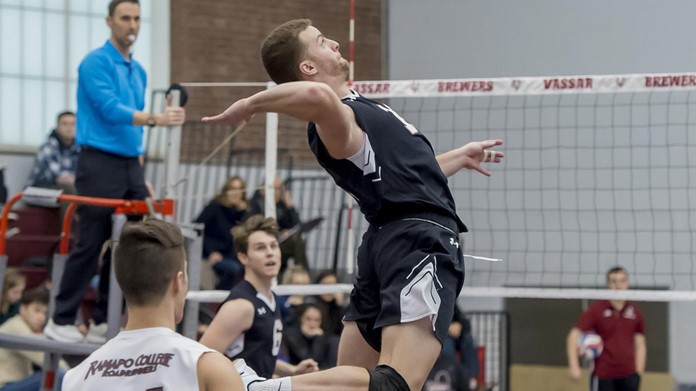 On Saturday, Feb. 8, the Ramapo College men’s volleyball team hosted Skyline Conference rival St. Joseph’s College (LI) and non-conference opponent The City College of New York for a tri-match at the Bradley Center. Ramapo came out on top, defeating both teams in the first and third games of the day. The two victories brought the team to a 1-0 conference record and 7-4 overall, as they recorded their sixth straight win.

The first set was neck and neck, with the biggest deficit being four points.

Ramapo took the lead quickly in the second, with a mini 5-0 run served by junior Jason Van Der Wilt to bring the score to 6-1. The Roadrunners held the lead the rest of the set and hit the winning 25 on a kill by senior Eric Van Thuyne.

Ramapo trailed most of the third, but managed to snatch the lead 19-18 off a serve by captain Stephen Codispodo in the final minutes of playing time. The set ended at 25-21 with the Roadrunners proving victorious.

Offensively, Van Thuyne led the team with 12 kills on 26 attempts, hitting .385 and only giving up two errors. Behind him was Van Der Wilt who hit .233 and collected 11 kills.

Other lead team players proved to be sophomore Josh Titus, who dished out 35 assists total along with Codispodo, who led with 10 digs.

Aces were contributed by Van Der Wilt and Titus. The defense was led by junior Conor Charlow, who put out five blocks of the team’s eight total.

Ramapo came out hot and took the lead in the very beginning of the first set. They only gave up this lead once until Van Thuyne served to gain two points off an error by City College and a team service ace, putting them back on top at 8-6.  Ramapo reigned from that point.

The second set was even easier for Ramapo, with a mini run under Brower’s serves that launched the Roadrunners into a five point lead.  When they hit 25 points, the Bears were down by 11.

The final was the most exciting, as it was a one point game in the beginning. Ramapo jumped ahead for good after Charlow dished out a kill to make the score 16-14. After that, the team did not give up their lead again, ending the set at 25-18 and tallying their second sweep win of the day.

Sophomore Andrew Finnegan came ready to play in this match, firing ten kills as he hit .333, while also tallying five digs, one ace, and one block.

Senior Mack Brower also had a good game and proved himself with six kills on 10 attempts with a hit total of .500. He also contributed four digs and two blocks, all with just one error. Senior Lucas Inglis posted a team high of 26 assists.

The men’s volleyball team is on fire this season, and they are currently on a winning streak.  They return to the court on Tuesday, Feb. 11 for an away game at Hunter College. Their next home game is Wednesday, Feb. 19, where they will host New Jersey City University for their second conference match-up of the season.