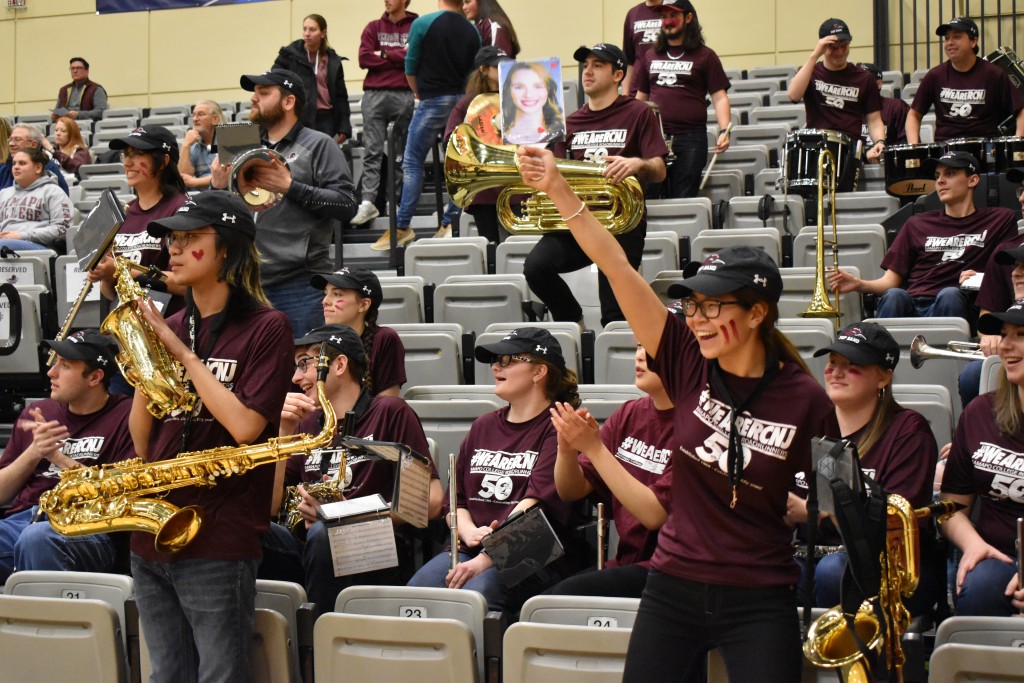 Photo courtesy of the Office of Marketing & Communications, Ramapo College of New Jersey

Ramapo’s first-ever fight song was unveiled during halftime of the women’s and men’s basketball games in the Bradley Center on Feb. 5. The song’s composer, senior Christine Mausser, was acknowledged during the halftime of the games and played the song on saxophone with the pep band.

Mausser submitted the winning fight song to the competition the Ramapo Traditions Council launched this past fall. The Council is responsible for preserving Ramapo traditions and planning future ones. When discussing future traditions in honor of Ramapo’s 50th anniversary, Dean of Students and Chairperson of the Traditions Council Melissa Van Der Wall said the council decided that Ramapo needed a fight song.

Although Ramapo has an alma mater, the college did not have an official fight song that could be played during sports games and athletic events, so the council organized a competition that was open to students, faculty and alumni to submit lyrics and music for a fight song.

The committee of judges that voted on the submissions was made up of Traditions Council members, music faculty and the President's Cabinet. With the help of pep band director David Marks, Mausser’s original song was refined with a melody to match its lyrics. The lyrics are, “Fight for dear Ramapo / We Rowdies all agree / For dear ole Ramapo / We fight for Victory! (Fight! Fight! Fight) True pride of Ramapo / On that we can agree / Now, on for Ramapo / Vic-tor-y!”

Mausser, a nursing major with a neuroscience minor, is a founding member of Ramapo’s pep band, which was established during her freshman year in 2016. Once the pep band was formed, she realized that unlike other colleges, Ramapo did not have a fight song. As the pep band developed, Mausser had written songs about school spirit for the pep band to play.

“I had a couple of drabbles here and there, just stuff that I had put together. Nothing really comprehensive, just a couple of fun little rhyme schemes or like a little jingle, so I just had them scattered,” Mausser said. When the fight song competition was announced last year, it motivated her to organize her jingles into a full song.

“I did some research into what other schools do for their fight songs,” Mausser said, “But unfortunately, we don’t have very melodic or rhyme-convenient mascots or colors, like maroon’s hard to rhyme with. Roadrunner’s hard to rhyme with and they don’t quite fit, so I had to get a little creative with that.”

Mausser crafted a final version of her song that had both catchy lyrics and a harmonic musical accompaniment. They strategically wrote the song so that the melody is spread among different sections in the pep band. Although it’s common in pep band compositions for loud brass instruments to carry the melody, Ramapo’s fight song was composed so that each section in the pep band could play the melody to make it sound harmonically full.

“We wanted to spread the melody across to the flutes and the saxophones so that way no matter who would show up to play at the games or play at an event, we would always have somebody to carry the melody,” Mausser said. “That was what was most important to make sure it would sound good regardless of how big the group was.”

Mausser said she was honored to be recognized by President Mercer, members of the Traditions Council and other prominent faculty and staff members. She is proud that the fight song she wrote will celebrate Ramapo’s 50th anniversary and be cemented as a new tradition at the college.