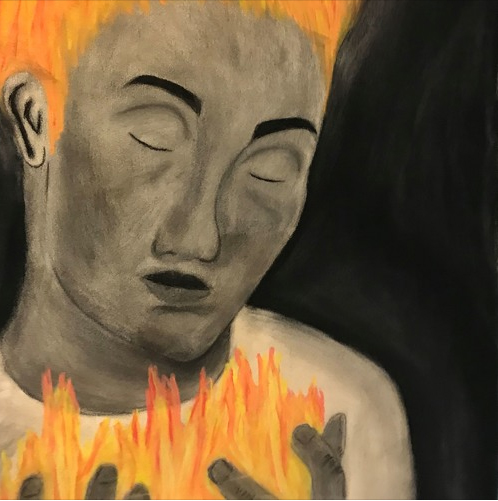 Ramapo College is home to many students with aspirations of making it big in the music industry. One such musician is Tahj Hinton, otherwise known as Flu5h, a junior music industry major. Describing his music as a mix between hip hop, R&B and soul, Hinton has described his desire for his music to mix creativity and simplicity.

“I try to implement just enough creativity so that it delivers the feelings I want to bring out in people, without overdoing things,” he said in a recent interview. His Jan. 9 release, “At, at, at night,” is just one example of his abilities being put to work. It may not cater to everyone’s tastes, but overall, it is a solid listen that one can easily appreciate.

The first thing that listeners will most likely catch onto is Flu5h's sampling of rapper Kid Cudi’s hit 2008 song, “Day ‘n’ Nite.” The hit song’s lyrics are played on top of Flu5h’s beat, creating a song with a somber atmosphere that is helped by Cudi’s words about loneliness, depression and his use of drugs to cope with his inner demons.

The song itself feels very relaxing, oddly resembling lo-fi hip hop music compilations that you could find on YouTube. The beat also has a fair share of effects added in that provide the song with more substance. For example, when Cudi sings the line, “won’t hear a peep”, Flu5h adds in the sound of crickets chirping. Little touches like these add more effect to the song, making it catchier the more one listens to it.

Although the song itself does have a lot going for it in terms of its foundation and some of its elements, you cannot help but question some aspects of the song’s production. Listening back to the original version of “Day ‘n’ Nite,” it also has a low intensity beat that backs up the vocals, one that has become iconic and still resides in people’s minds to this day.

Due to this, it is admittedly jarring to hear Cudi’s lyrics on a different beat of a similar caliber. While it does work in this instance, it feels redundant as a byproduct. One cannot help but wonder if there were other songs to sample that could have made just as much of an impact without potentially sharing too much with its original source.

Regardless of that, Flu5h has created a song that succeeds at being catchy and mellow, without running the risk of being exasperating. It is not perfect, but it does show how much potential there is for Flu5h as a music producer.

“I want to be sustainable off of being myself…" Hinton said. "The older I get, the more I appreciate and enjoy the craft.”

This song is a great foundation for what could be a great career, and hopefully with time, Flu5h will truly find his sound and have an audience to share it with.