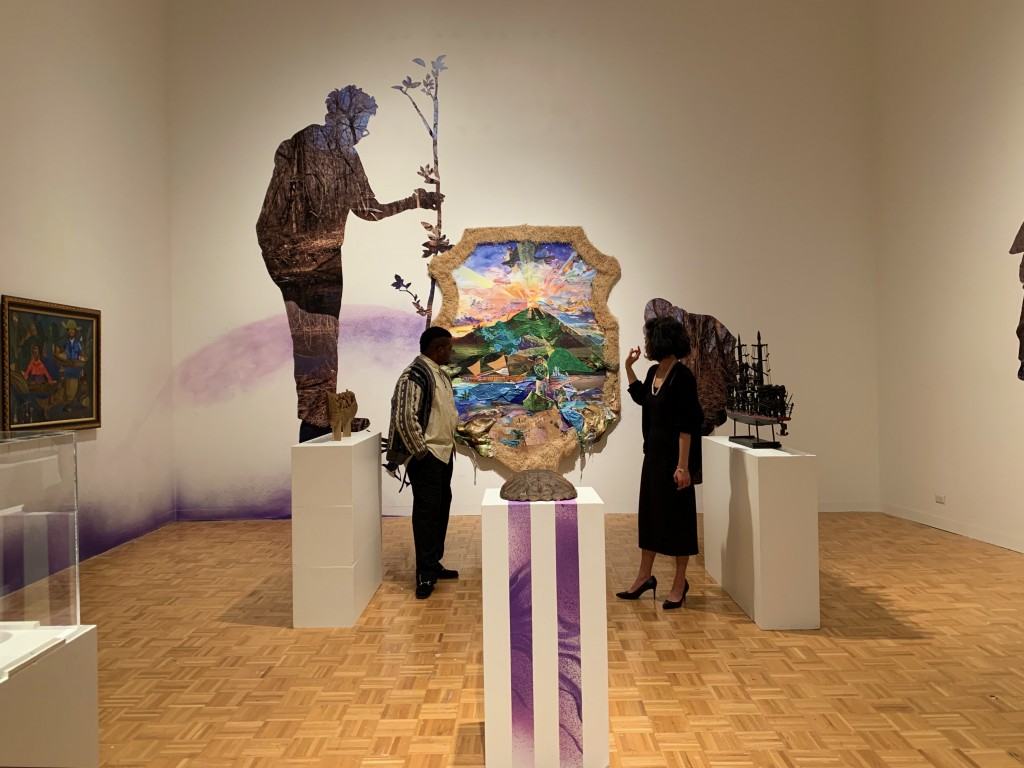 “Mawewi: A Place Where Paths Meet,” an installation by Camille Hoffman and Two Clouds, her collaborator and member of the Ramapough Lenape Nation, is hosted in the Kresge Gallery and explores indigenous transoceanic histories, political symbolism and land stewardship.

“Alum and Then Some” features works by Geri Hahn and David Monteavaro, and is located in the Pascal Gallery.

“As always we’re really excited to have such great artists like Geri and Dan featured in the gallery,” Dean Peter Campbell said. “Sydney Jenkins did a great job bringing provocative and thoughtful art to the gallery.”

The exhibits featured a variety of multimedia work, from paintings, to sculptures, to vinyl prints pasted on the walls of the gallery.

“I found myself drawn to thinking about the New York state seal,” Hoffman said. She sought to reimagine the seal and to gain more insight into the history of water.

Hoffman spent a lot of time reflecting on past and current connections on water.

“Two Clouds and I went through the Rodman collection and were immediately struck by the pieces that are in this room,” Hoffman said during the artists’ talk. “All of these works pertain to the sacredness of water and exchange. This is very much a conversation between Two Clouds’ and my work, and the permanent collection.”

Two Clouds highlighted how Ramapo College is built on Ramapough land, of which the tennis courts are built on burial ground, and continued to speak on the importance of water.

“Water is very sacred to us because our name means ‘sweet water,’” he said. “The pipelines going through [native] land is literally an act of war,” since the nations within the United States are independent.

“This [exhibit] is one of my favorites. The symbolism of this room goes into the shapes in [the next] room; it has a beautiful flow,” senior Giselle Ruiz said. “All the colors and patterns are so coherent.”

“What most influences my work is that I'm a synesthete … when one sense turns on, another turns on,” Hahn said.

“I have always drawn because that is where I shut off the sound,” she continued. For Hahn, all letters and words are in color, and she sees ticker tape under people’s mouths when they speak.

Her brain is busy, and the only time she manages some quiet is when she is drawing or sewing, and draws biomorphic and geometric figures.

“I'm not making photographs of what I see in my brain … I need a story to tell,” Hahn said. “If I don’t think that [the art] has enough substance. I do not commit to it.”

“When I get a commission, I still fight against over-advertising it. If a company asked me to do a piece there still has to be integrity there,” Monteavaro said during his artists' talk.

He noted that people cannot choose not to see public art and that it’s “kind of scary” for people when it is their neighborhood and it is “a piece of art they may hate.”

“For the murals I have to understand that people are going to have their own conversations with it and they don’t have a choice,” Monteavaro said. “With these you have a choice to come see them.”

“We’re a hidden treasure on campus, it’s always free and a nice place to go on a date. We have the wonderful event on March 29 and we’d love for people to come see it,” said Sydney Jenkins, the gallery director.

An additional event, a screening of a Brooklyn Demme film, will be held on March 29, followed by a discussion with Demme, Lou Cornum, Camille Hoffman and Two Clouds in the Sharp Theatre at 2 p.m.

Both exhibitions will be open until April 10.