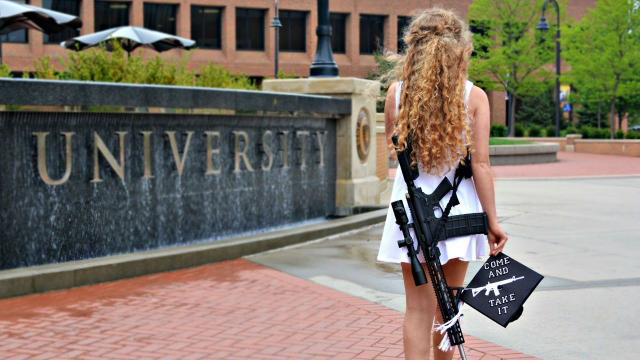 After gaining attention on social media in 2018 for her controversial graduation pictures, Kaitlin Bennett, better known as “Gun Girl,” has recently become a hot topic of discussion on the internet.

In 2018, Bennett posted photos of herself carrying an AR-10 rifle and her graduation cap stating, “Come and Take It,” on her college campus, Kent State University. This quickly blew up on social media, paving the road to Bennett’s new popularity.

The outspoken graduate is a proud Republican, conservative and Trump supporter, unafraid of vocalizing her harsh opinions. Clearly, based on her graduation photos, Bennett is pro-gun, pro-Second Amendment and has claimed to carry, ultimately gaining herself the title of “Gun Girl.”

Since going viral, online users have not held back their unfriendly opinions, and this attention has led to Bennett’s personal success and popularity.

Bennett has used her platform to express her thoughts and engage with the public, especially those of different beliefs. Her media outlet, Liberty Hangout, is where Bennett and her team can post articles, commentary and YouTube videos. The most popular video series on Liberty Hangout consists of Bennett traveling to different college campuses or public events and interviewing people.

Bennett, who graduated from KSU with a biology degree, considers herself a conservative journalist, though her journalistic approaches in her videos tend to be based around asking extremely conservative questions, followed by a quick response in disagreement with whatever the answer was.

Her videos tend to target liberal college students, asking heated questions, like in her most recent interviews: “What do you think about putting urinals in women’s restrooms for women who have penises and they just wanna stand and pee… Tampons and pads in the men’s restroom for men who have periods?”

She also focuses on American trivia questions, as well as discussions on abortion and gun law. These topics, combined with the presence of Bennett, has upset many young Americans, and they have become aggressive with Bennett, both politically and personally.

However, this does not bother Bennett. It is her fuel and her validation, and she recognizes that negative attention is still attention, which is what she ultimately craves.

“I just want to remind everyone that I didn't gain "fame" on my own. People only know who I am because of leftists who have been giving me free promotion for two years now,” Bennett tweeted on Feb. 18. “The people mad at my existence are the ones responsible for my platform. Congrats, you played yourselves!”

The tweet was posted the day after Bennett and her Liberty Hangout team were chased off of Ohio University by hundreds of college students.

Bennett traveled to the university to film just another one of her videos, but a large spark in opposition and hatred for the girl has led students to be loud, obnoxious and violent towards Bennett, emphasizing how they are no longer keeping their mouths shut.

The just under 40-minute YouTube video posted by Liberty Hangout claims that “Leftists Riot Against Kaitlin Bennett at Ohio University,” but those opposed to Bennett see it as protesting and shutting her down.

Despite whose beliefs may be right, radical behaviors and situations like these must come to an end.

As a nation, we have become terribly consumed with overly expressing our opinions and destroying those who disagree. There is such a thing of being too left or too right, but it is not okay to continually generalize those who do not see eye-to-eye with us, especially without further learning about their perspective.

Passion is acceptable. Passion is what our nation needs to see in order to reach our goals. But as it stands, the meaningless arguments, violence and cruelty have gone too far. How are we supposed to force others to agree with us when we refuse to listen?

Bennett, unfortunately, is only one predominant example of aggressive and non-beneficial activism. Cocky, intimidating and dismissive behavior has become a trend to follow due to current political figures, but it is no longer worth giving a reaction.

When we stop focusing our time or energy on Bennett’s actions and opinions, we leave her with no drive, outlet or sense of superiority. Ignoring “Gun Girl” and her radical voice not only silences her, but it also pushes focus to what is truly important, rather than this childish take on serious political issues.