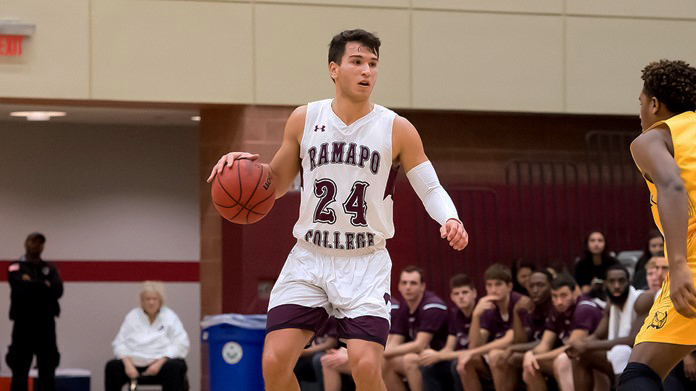 The Ramapo College men’s basketball team closed out their hard-fought 2019-2020 season on Saturday, Feb. 22 in a tough loss against Rowan University, 94-80, in the first round of the NJAC Tournament.

Regardless of the end result, the Roadrunners had yet another excellent season, ending with an overall record of 15-11. Ramapo is not advancing to round two, but they were still ranked third seed at the start of the tournament.

The first-round tournament game was nothing short of intense. The Roadrunners got on the board first with a layup put out by senior Connor Romano only 30 seconds in. From there, baskets were exchanged by both teams until Romano responded with another layup in the paint at 13:40 to jump start his team on a 7-0 run that would enable Ramapo to take the lead. Senior Rob McWilliams contributed a three-pointer in the run that was capped off by senior Andre Morgan who added a layup, bringing the score to 19-15 in Ramapo’s favor.

For the remaining 12 minutes of the first half, Rowan used an offensive tactic of just firing three-pointers to gain as many points in as little time as possible. Ramapo continued to trail them by a few points and could never fully steal the lead back. At the buzzer to conclude the first half, the Profs led 47-32.

Both teams came out of the locker room hot and ready to play; there is no doubt that the momentum was high, and the blood was pumping. The Profs immediately started shooting three’s again and Ramapo tried their best to keep up.

At 17:28, senior Jordan Zagadou started what would be an 8-0 run for the Roadrunners with a jumper in the paint. Junior Marquise Kindel added the second jumper, and then McWilliams stepped up and put out four points to cap off the run. He first recorded a fast break layup and then netted two good free throws, shrinking the lead to 57-46.

Still behind, the Roadrunners did have one thing the Profs did not: home-field advantage.

Fueled off the energy from the crowd, Zagadou and McWilliams netted back-to-back slam dunks. Ramapo was down by 12 points with a little over five minutes left of playing time. A layup by Romano at 4:18 paired with two jumpers from Zagadou gave the Roadrunners a 6-0 run to minimize the lead a tad more and put them in reach, 83-75.

With just over a minute left and Ramapo down by 15, sophomore Jason Battle sank a three-point shot, but it would not be enough. Ramapo fell to the hands of Rowan University and the final score stood at 94-80.

Ramapo seniors McWilliams and Zagadou earned the double-double. McWilliams played his last game as a Roadrunner by setting a career high of 28 points while also adding 12 rebounds. Zagadou recorded ten points and 12 rebounds in his final game on this team.