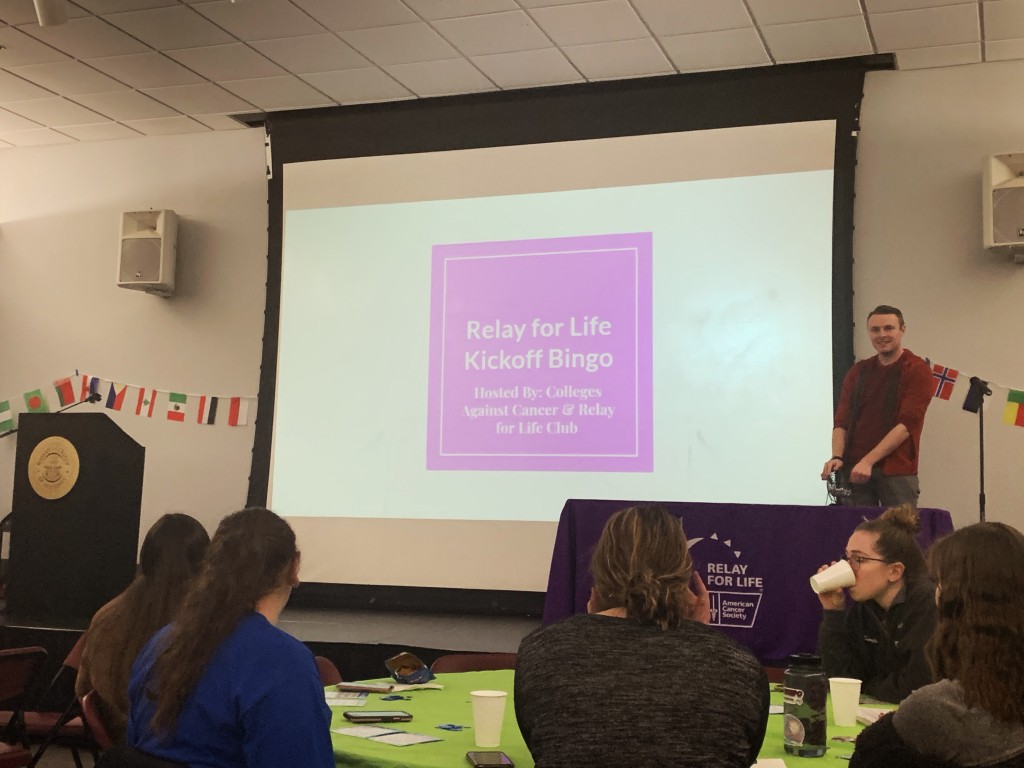 Colleges Against Cancer and Relay for Life at Ramapo co-sponsored a “Relay for Life Kickoff Bingo” event on Monday, Feb. 24 at 9 p.m. in Friends Hall.

The event was held as the first fundraising motive for Ramapo’s annual Relay for Life walk, which will take place on April 17th from 5 p.m. to 5  a.m. in the Bradley Center. This year’s theme is “Around the World,” and the bingo event was decorated accordingly with multiple countries’ flags lining the room as well as globe balloons on the floor and tables.

“The goal for Relay [for Life] is that cancer never sleeps,” said Scott Sample, the president of Colleges Against Cancer. “So, for this night, neither do we.”

The bingo event mainly included members of both Colleges Against Cancer and Relay for Life. Each participant paid five dollars to receive two bingo boards in hopes of winning one of the admired prizes. The prize list included a hydro flask, a cotton candy machine, a Polaroid camera, a record player, AirPods and gift cards from multiple establishments including Chick-Fil-A, Shoprite and Panera.

Between bingo games, Colleges Against Cancer executive board member Stephanie Dallara promoted the club’s next fundraising event. “Eat for Change” took place at the Ramsey Chipotle on Feb. 26 from 4 p.m. to 8 p.m.

Of the profits, 33 percent made at the Chipotle fundraiser will be given to Ramapo’s Relay for Life to help run the night-long event.

This year’s goal for Relay for Life is to raise $40,000 for the American Cancer Society, which will be record-breaking for the annual event. Last year, the fundraiser collected over $36,000 at the overnight walk.

Currently, Ramapo’s Relay for Life has raised over $5,900 for their ultimate goal.

Once the AirPods were given out as the final bingo prize, Sample announced that the attendees collectively raised over $150 and that all of the profits will be going to the American Cancer Society. The profits will also be included into the donation total for Relay for Life.

Organizations that will be participating in this year’s Relay for Life include Ramapo’s Honors Program, the Nursing Student Organization and multiple Greek organizations on campus.

“This is my third and final time participating in Relay for Life as the Honors team captain,” senior Gagan Namburi said. “Every year has been fulfilling, as I have been able to share this meaningful experience with fellow honors students and raise money for cancer research.”

As of Feb. 26, the top Relay team is Colleges Against Cancer with $1,880 donated. The current top Greek organization is Sigma Delta Tau with $1,110 donated.

This week only, registration for Relay for Life is only five dollars if Ramapo students and faculty use the code “RCNJ20” when joining a team.