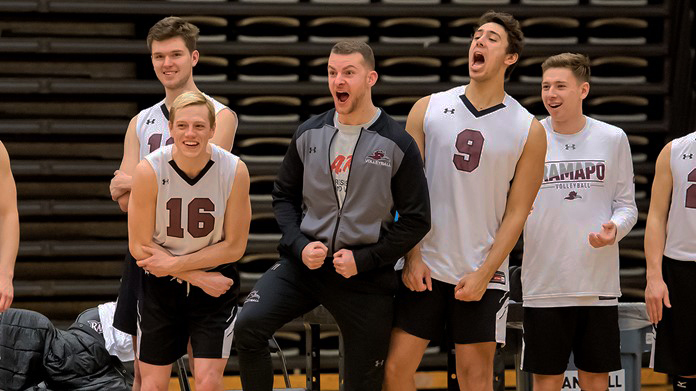 Over the weekend and into Monday, March 2, the Ramapo College men’s volleyball team played a total of five games, winning all but one on Saturday against Kean University.

Their most recent victory was claimed Monday night on the road against New Jersey City University, 3-0 (25-17, 25-16, 26-24). The Skyline win keeps their undefeated conference record intact, 5-0 and improves their overall record to 12-7.

New Jersey City stole the first point of the game, but Ramapo was quick to respond. Both teams exchanged points until the Roadrunners started capitalizing on the Gothic Knights’ errors. Ramapo tallied a quick six points in the middle of the set, with two kills put out by captain Eric Van Thuyne.

During consecutive mini 3-0 runs, Ramapo jumped from 12-11 to 18-12, giving up one point in between runs to New Jersey City. They held the lead for the remainder of the set and ended ahead by eight, 25-17.

The second set played out similarly, being only a one- or two-point game for most of the playing time. Ramapo started to slowly creep up mid-set; they capitalized on attack errors and junior Conor Charlow added two kills while captain Stephen Codispodo recorded one on his own to widen the gap on the board, 20-13. New Jersey City could not catch up, and five points later Ramapo ended the set 25-16.

The most challenging set proved to be the final one, with New Jersey City coming out hot and gaining four points right away. Ramapo tried their best to keep up by scoring a few points in between their opponent’s runs, but New Jersey City just kept racking in the points, getting 12 and leaving Ramapo with only four. This rhythm continued and Ramapo was behind by eight points for most of the set.

The Roadrunners made a sneaky comeback at the very end, with a 3-0 mini-run served by Codispodo. The team gained two quick points as a result of attack errors by New Jersey City paired with a kill by Charlow to tie it up 20-20. The Roadrunners hit three additional kills, one by Codispodo and two by Van Thuyne, and coupled with the Knights’ errors Ramapo would claim the set, 26-24, which would ultimately secure the match victory as a 3-0 sweep.

Right behind him was Charlow who posted nine kills, also with two aces and three total blocks.  The middle blocker hit .389 in the match which earned him Skyline Player of the Week Honor Roll.

Van Thuyne also had a good game, hitting .381 with no errors.  He recorded eight kills on 21 attempts and tallied two aces and one block.

Also recognized by the conference was sophomore Tyler Plitt, who was named the Skyline Libero of the Week. For the defense, he put out a team-high of 11 digs while he added three assists on offense. The team-high of 29 assists was dished out by sophomore Josh Titus.

With an undefeated conference record, the men’s volleyball team is looking really good this season. Their next match will be non-conference and will take place on Wednesday, March 4, when they host #4 New Paltz at the Bradley Center at 7 p.m. The Roadrunners return to conference action on Saturday, March 7, when they travel to Riverdale, New York to face the College of Mount Saint Vincent at 11 a.m.