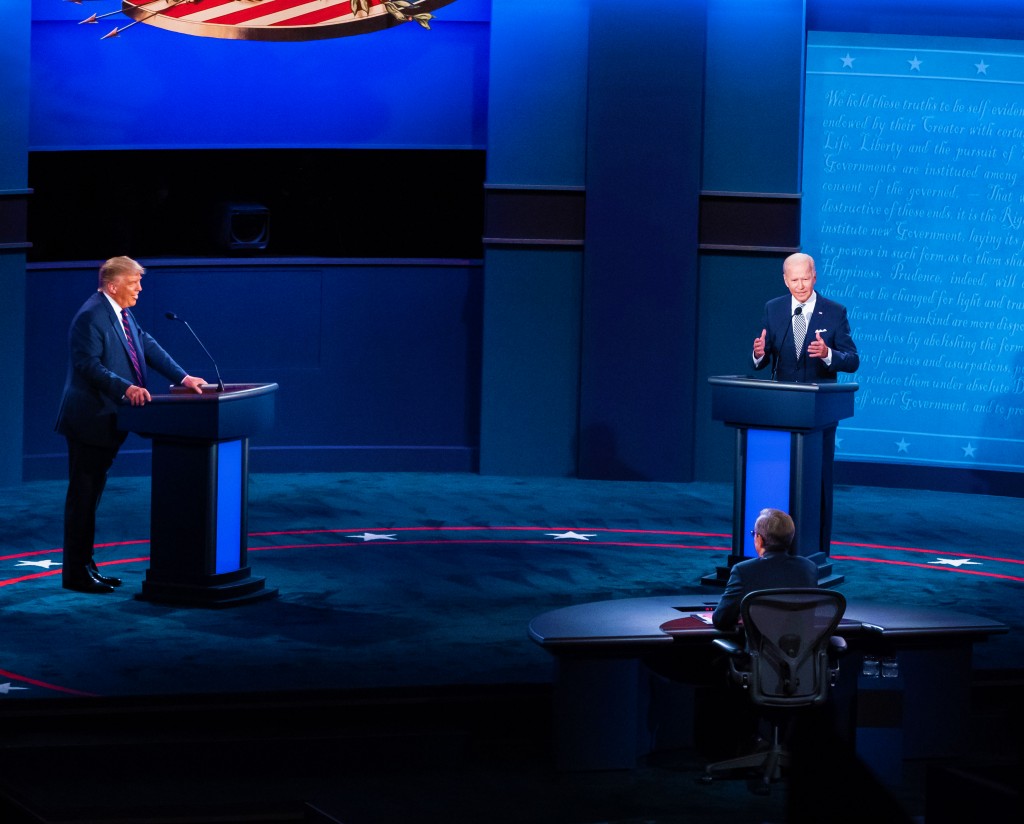 Tuesday night was the first 2020 presidential debate. The dead silent, darkened audience seemed to foreshadow what was to come. The debate epitomized the political conversation across the country: rather than discussing who is a better candidate, the discussion revolved around who is worse.

Stepping onto the stage the candidates greeted each other. There was no handshake which was traditionally unusual, but since the era of COVID-19 began, this has become the norm.

An analysis of the first few segments reveals how the debate devolved. The first question was about the Supreme Court nominee, the second, “Trump’s health plan.” President Trump spent his first few minutes touting his Supreme Court nominee, after which, Democratic nominee Joe Biden was first to take the offensive. The former vice president made a brief rebuttal before going on a tangent about Obamacare, saying that Trump will “strip 20 million people from their insurance.”

Throughout the segments, Trump was repeatedly scorned by the moderator for interrupting. Although this is far from unprecedented behavior, the president seemed particularly persistent.

The first personal attack of the debate came from Biden. In quick succession the former vice president called Trump a “liar,” a “clown” and told him to “shut up.” The president followed up with his own jabs, citing Biden’s college class standing and saying, “There’s nothing smart about you.”

While the verbal assaults were inappropriate, they were nothing compared to the deceit, and at times blatant lies, that were heard throughout the debate. Trump seemed to be cautious with his words, likely due to the awareness that he would be fact checked thoroughly. Biden, on the other hand, did not seem to share that same fear.

During the second segment, Biden lambasted Trump for his “failed” pandemic response, citing the president’s delayed reaction and claiming that if it were him, he would have responded quicker. However, this starkly contradicted Biden’s position just months prior. In January, when President Trump first proposed travel bans from China, Biden called the move “xenophobic,” expressing his thorough disapproval of the decision.

Another major act of deceit in the debate also came from Biden. When asked to respond to the investigations surrounding his son, Hunter Biden, and his connection to a corrupt Russian oligarch, Biden denied it. This denial flew in the face of a report released last week by the Senate of Homeland Security and Governmental Affairs. The report confirms that Hunter Biden did in fact receive $3.5 million from the wife of a Moscow oligarch and was on Burisma’s board.

Biden was asked about both mentioned scenarios explicitly and, as if his magic words would make everyone’s suspicion disappear, he stated simply “They are all lies,” with no further explanation.

Biden also denied, in a similar fashion, the widely reported fact that his son Hunter Biden was discharged from the military for cocaine use. On top of this, Biden claimed that during his time in office, violence was 15 percent lower than it is currently under President Trump, but this is false; violence has gone down under Trump. He also claimed that newly nominated supreme court justice Amy Coney Barrett, wrote that “the Affordable Care Act was unconstitutional,” which is also false.

The fact checkers also compiled a list of Trump’s “lies” during the debate, but upon closer investigation, several of these lies turned out to be hyperbole at worst.

For instance, the top three “lies” on a CNN Politics list of “an avalanche of lies” include Trump’s comments regarding cows and the Green New Deal, Hunter Biden’s discharge from the military and Joe Biden’s class standing, respectively.

Topping the list was Trump’s comment during the debate, “they want to take out the cows.” The article states “This is false.” They cite the quote in question from Representative Alexandria Ocassio-Cortez, “We aren’t sure we’ll be able to get rid of farting cows and airplanes that fast.” The implication of Occasio-Cortez’s cited shows that Trump’s statement is more of an exaggeration than a lie.

Another of the top three “lies” Trump said to Biden, “You graduated either lowest or almost the lowest in your class.” According to CNN, this was a lie, and Biden actually graduated, “76th out of 85 students.” This aligns logically with Trump’s statement.

Bear in mind that this was the top three “lies from the debate” from the first search result on Google for “Trump debate fact check.”

In the end, Biden did get something right. He looked into the camera and said “this is supposed to be about you,” referring to the people. To a degree, neither candidate fulfilled this sentiment. The on-screen bullying was embarrassing, Trump’s interruptive speaking was unprofessional and Biden’s willingness to flat out deceive was utterly terrifying. The only way to put an end to this sort of behavior is with a widespread embrace of objectivity and compassion for others.