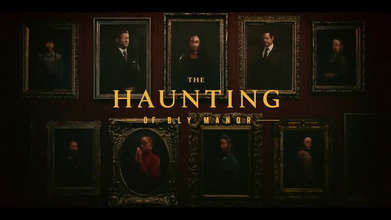 “The Haunting of Bly Manor,” the long-awaited second supernatural horror series in Netflix’s “Haunting” anthology, has finally come. Based on Henry James’ “The Turn of the Screw,” “Bly Manor” presents viewers with a suspenseful horror made with binge-watching in mind.

Fans of “Haunting of Hill House” have been waiting for this release since its announcement in late August, but while the two shows share some lead actors, they are not as similar as they look. While the “Haunting” series follows a general theme so far, the shows are independent of one another.

The story is centered around two children who have experienced more loss than most, left by their alcoholic uncle to the castle-like home of their deceased parents. Flora and Miles, played by Amelie Bea and Benjamin Evan Ainsworth respectively, are also grieving the loss of the au pair whose role is being filled.

Where “Haunting of Hill House” elicited screams, jumps, and gasps the entire way through the short series, “Bly Manor,” on the other hand, elicited more tears than I expected for a horror series. “Dead doesn’t mean gone” took on a whole new meaning in this series, perhaps one more hopeful than the last.

“Bly Manor” is the titular picturesque countryside English home, but its history is dark. The new au pair Dani, played by Hill House lead Victoria Pedretti, comes looking for a fresh start from a dark history of her own, only to be dragged into the gravity of the home. At every turn, it seemed Dani would finally be free of the literal ghosts which keep her on the edge of tears at all times, but such relief is held far above the viewers' heads.

Other than Pedretti, the main actors from “Hill House” are less center than expected. The show featured Carla Gugino, Henry Thomas, and Kate Siegel, all previous residents of Hill House. This “American Horror Story” style casting has me wondering if that’s what Netflix is trying to measure up to in their own rite. If so, I say they keep doing exactly what they are here to do.

Netflix can have a tendency to pull a show out longer than it does the plot justice, but the creation of an anthology has saved “Bly Manor” from being a sequel. By allowing the plot to have different themes, different character arcs, and different endings, “Bly Manor” stands alone as an incredibly made show.

Though the show is technically supernatural horror, “Bly Manor” reads through and through as a love story. Unfortunately, this at times felt flat after coming in with the expectation of jump scares, but in the end, made me appreciate the lack of gimmick. Producers and writers could have easily created a fast-paced show that kept viewers unable to sleep at night but instead makes viewers question their morals.

Perhaps the most stellar aspect of the show is its framing: a woman is telling a ghost story at the rehearsal dinner of a wedding. She, Carla Gugino, poses as the narrator for the continuation of the series, and it never comes off as interruptive. Some episodes were predominantly narration, which created a contrast to the few speaking scenes and let them shine.

Besides the meticulous writing, the set and delivery took center stage. While the plot may have dragged at times, it was with intention of building character, which could not have been portrayed better. Main actors Amelia Eve, T’Nia Miller, and Rahul Kohli fully embodied their characters, even at times in the show when their reality was becoming warped.

The picturesque setting slowly becomes the backdrop of a nightmare. Much like “Hill House,” the setting is in itself a character of the show, and the characters seem to become bound to it. The attention to detail is both beautiful and chilling. There always seems to be something hiding in the dark corners of the screen.

Victoria Pedretti showed her ability to play vastly different characters in similar stories, which helps the show to feel fresh. The slow uncovering of the cyclical history of the house keeps viewers trying to put together pieces and biting their nails for the main plot. While this was not the October fright I had expected it to be, the individuality of “Haunting of Bly Manor” from its predecessor is one of its best qualities.