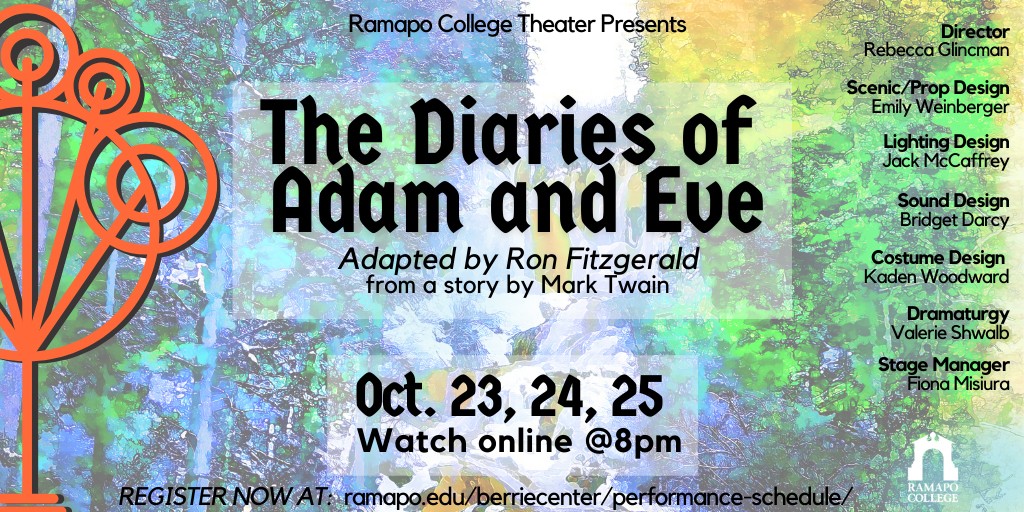 From multitasking between several monitors, managing live sound cues and delivering items to the actors, the students of Ramapo’s first virtual play have been working harder than ever to keep theater alive amidst the pandemic.

“This was a wildly different experience than anything I have ever done,” said director and senior theater major Rebecca Glincman.

The show is a hilarious comedy that explores the relationship between men and women. The playwright, Ron Fitzgerald, adapted the play from short stories by Mark Twain about the psychology of the iconic biblical figures Adam and Eve.

After a weekend with over twenty hours of technical rehearsing, fake prop exchanges and perfectly lined-up sightlines, the team created the illusion of the actors being in the same place. Created by scenic designer Emily Weinberger, the actors have matching backdrops and paper trees that when placed correctly among the video boxes act as puzzle pieces for a larger picture.

“I have to give the biggest credit to the student designers,” said Luka Marjanovic, a junior acting student who plays the titular character of Adam. “Not only did they deliver everything we needed to our door, they also had immense patience when it came to guiding us through the setups.”

The visuals were further made cohesive by lighting designer Jack McCaffrey, who maintained his usual lighting effects without the use of a professional lighting system. He uses household items like battery-operated candles and bowls of water to create fire and water effects for the actors, who are frequently tasked with performing their own lighting cues.

While his job hasn’t changed much, costume designer Kaden Woodward has been working tirelessly to build high-grade costumes for the characters without the usual help from costume shop workers. “On the bright side, I only had to create costumes from the waist up because everything else would fall out of frame,” he joked.

Playing Eve is alumni Jaime Plitnick, who is finishing up her teaching certification. On her bedroom floor lies an abundance of spike tape markings and a towel has been taped over her window to block out unwanted light. Plitnick describes the process as very tedious, having to act and manage her technical responsibilities all at the same time.

Freshman Hope Keil, who plays Cain and the Snake, added, “Instead of mentally preparing for a scene, we’re busy fixing and setting our lighting as quick as we can.” Marjanovic joked about how sad it feels to use his doorknob as his sightline for Eve. “It makes me feel like when Ian McKellen cried on the ‘Hobbit’ set because he had to act alone in front of a green screen.”

Despite not getting to bounce off one another in-person–as Keil stresses is an important aspect of live performance–the three make a successful team with well established relationships, all tied through the hard work of the student creative team and production staff.

Special thanks to the show’s dramaturg, Valerie Shwalb, for gathering supplemental research and some of the quotes featured above. Register for a live performance here.