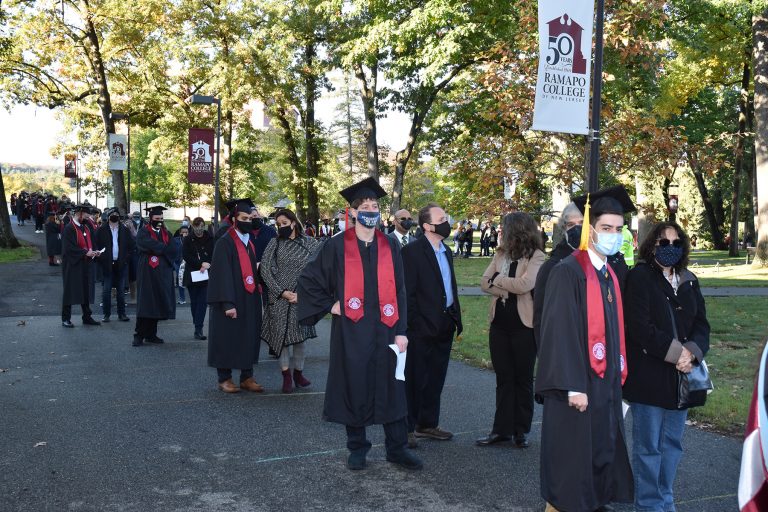 After years of hard work, college seniors across the world had the day they’d been waiting for ripped away from them “until further notice.” Six months later than intended, Ramapo’s seniors were finally able to turn their tassels and celebrate their unusual graduation day.

Most felt the day was strange for a plethora of reasons, all due to the pandemic.

“It was kind of funny to do it after all this time,” said graduate Matthew Lowe. “This was definitely not the sequence of events you’d see in a typical movie.”

Others agreed the day was far from typical. Graduates were taken through the arch for photos, one at a time, missing their long-awaited congratulatory handshake from President Mercer. After, a brief ceremony was conducted at Bandshell lawn.

“Before, I had pictured myself in an auditorium sitting near my classmates as my family watched with many other family and friends around us. However, it wasn't like that,” graduate Stephanie Guzman said. “I was sitting next to my mom and dad. We were socially distancing from classmates and their two other guests, outside.”

Students walked across the stage one at a time, receiving their diploma through a plexiglass shield. They took two photos and returned to their seats.

“I wasn’t as excited because it didn’t feel real, because so many months had passed,” said graduate Jennifer Mendez. “I just felt sad for the most of it because it wasn’t the way everyone wanted it to be. The ceremony was fast, there weren’t speeches, so it just felt rushed.”

Graduates, now long finished with their college days, were offered three dates to pull out their regalia, but Mendez said this process felt too quick.

“When they finally sent an email they didn’t give us enough time to decide dates and times,” Mendez said. “They also didn’t tell us how the ceremony was happening until the day before.”

The short ceremony and limited guests were a source of sadness for many graduates, the big day they dreamed of being so different.

“Commencement was short and sweet. Not how my family, friends and I would have imagined it after four years of attending Ramapo,” Guzman said. “However, coming back to Ramapo after suddenly being disrupted from my last semester at Ramapo was nostalgic. It felt like home once again.”

COVID-19 certainly changed the lives of every student, but perhaps none so much as these seniors. At the day of graduation, many had already moved on to the beginning of their careers, making the day feel like a return to the past.

With the given circumstances, the administration spent months planning the best possible accommodations for the graduates.

“I appreciate the work the Ramapo faculty and staff put in to give us at least some sense of normalcy,” Lowe said. “Everything went smoothly, and I felt safe the whole time. None of us could have imagined it ending like this when we started our senior year last September, but it was still a nice bookend to our college experience.”

Wearing a mask as they walked through the arch was hardly a reality anyone could have pictured. Most students last saw campus as they cleaned out their dorms, saying goodbye to their home of several years.

“It wasn't how I pictured it, but I felt the joy of my parents as they saw me in my cap and gown despite being many months after graduating,” said Guzman, a proud first generation graduate. “That alone made everything worth it.”

The Ramapo News sincerely congratulates the persevering class of 2020.