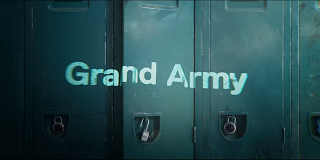 Netflix is commonly known for pumping out coming-of-age stories that can sometimes be unrelatable and unrealistic. They often barely scrape the surface of what it means to be a teenager in high school in the modern century. However, “Grand Army” gets it right.

Created by Katie Cappiello, the series follows the lives of five students attending a school in Brooklyn, New York. All five students are facing real-life challenges that many people can relate to. As the show progresses, these five students face tough decisions that could impact their lives forever.

“Grand Army” is loosely based on Cappiello’s “SLUT,” a play that follows the life of sixteen-year-old Joey Del Marco, a girl who is raped by her three best friends. It explores the reality of bullying, rape culture, slut-shaming and what comes after. These are serious issues that many people face every day, and both “SLUT” and “Grand Army” acknowledge it.

The series also dives into specific issues, such as homophobia and racism. For example, character Sid comes to terms with his sexuality and tries to find a support system within the school and his own friend group.

A common theme within the show is safety and how it can be taken away from us at any given time. This is clearly shown in the very first episode when a bomb goes off near the high school. Many of the students are shown calling their family, contacting their friends and staying close to their loved ones.

Another example is Dominique’s sister losing her job after falling at work, which leaves Dom and her family close to facing eviction. These examples of loss are all around us, and many choose to either ignore or face them. In Dom’s case, she does whatever she can to help provide for her family and works hard for what she wants out of life.

While the show has many upsides, there has been some controversy since its initial release. Ming Peiffer, at the beginning of September, retweeted the trailer for the show and stated:

“Me and the 3 writers of color who worked on the show quit due to racist exploitation and abuse. The show runner and creator went full Karen and called Netflix hr on the Black writer in the room for getting a haircut. Yes you read that correctly. Who wants to interview us?”

Peiffer explained that she was agitated over the trailer because it made the show look like everyone was united as the American flag was shown multiple times. She received both backlash and support over her tweet while wanting to know more about her side of the story. Peiffer went into detail when she and the two writers on the project came to Netflix about their concerns for the show; she explains that they were shunned. After her and her coworkers’ worries about the show were expressed, they were psychologically abused, and all three quit.

Despite controversy, “Grand Army” tries its best at targeting young audiences and overall wants to get stories like these out into the world, so people are aware of what is happening around them. Even with the show coming out in October, it takes place in early 2020, way before the pandemic. It gives fans a sense of realism and doesn’t sugarcoat the main characters’ issues throughout the series. Many of the show’s fans have been demanding a second season, but Netflix has not made it clear whether or not another season will come out.