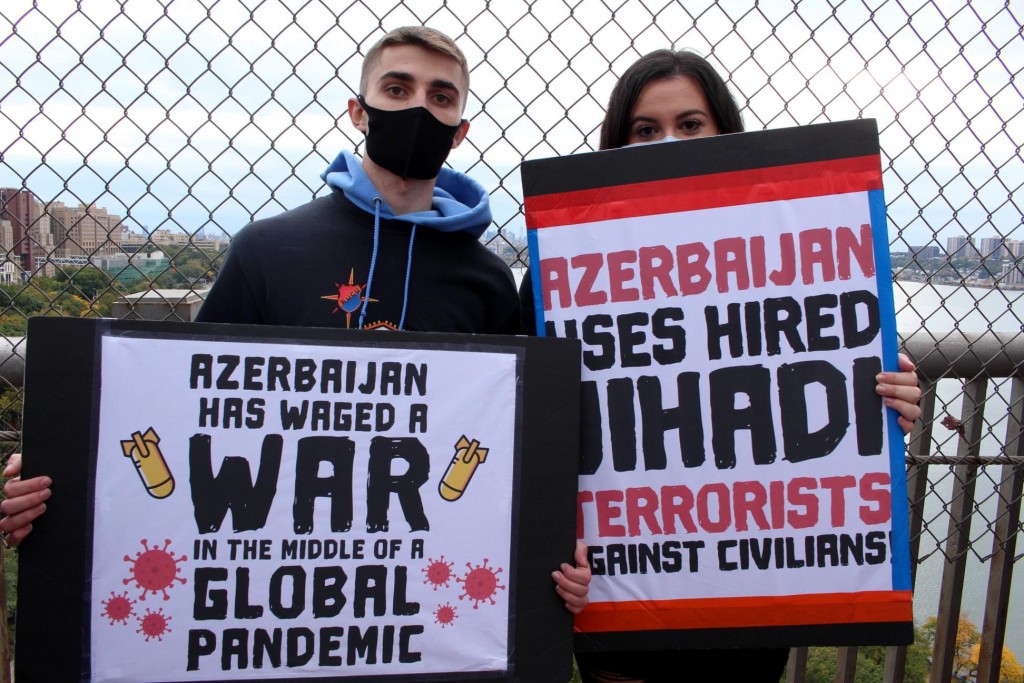 ARMENIA — Over 100 years after the Armenian genocide, Armenia is once again under fire from aggressors in Azerbaijan. While this conflict may sound far removed from the life of a Ramapo student, Armenians across the world and on this campus are feeling the grief of their people.

This conflict dates back decades to the collapse of the Soviet Union and centers itself around the Republic of Artsakh. The land and the people of Artsakh are historically and ethnically Armenian, yet internationally, the territory is recognized as a part of Azerbaijan as it was granted to them by Stalin.

Artsakh is over 95% Armenian, and yet they strive for it to be recognized as independent of Azerbaijan after declaring so in a referendum has been unsuccessful for decades. Because of its central position in the Middle East, between ally countries Turkey and Azerbaijan, it is highly sought after for power pursuits. The pressure from Armenians to connect with those of their own culture stands in the way of this pursuit.

“They say they want the land, but we know it’s not about that,” said Nairi Diratsouian, an Armenian student who attends Ramapo. “Once they get the physical land, they’re going to move on and their goal is to have no Armenia.”

Diratsouian, who works with the Armenia National Committee of America, explained that the land battle is nothing more than a front for more sinister goals. She says that Azerbaijan is trying to “finish what they started” over 100 years ago, to wipe out the Armenian race in the Middle East.

“This is not a conflict that came up out of thin air,” Leana Hacopian, another Armenian Ramapo student, said. “It went on in 1915, it went on in 1994, and it’s happening again today.”

Despite the history between the two countries, the war between Armenia and Azerbaijan is not being recognized largely as what it is. Many countries, including America, are speaking about it as a two-sided conflict, rather than acknowledging Azerbaijan as the aggressor.

“The New York Times just today published another biased article,” Diratsouian said. “It’s very frustrating to see news sources you grew up knowing that they’re credible and that you’d be able to use them in assignments and stuff, basically completely disregarding the truth and just saying what they’re supposed to say.”

Though Genocide Watch has published that they believe Artsakh and Armenia are under a top threat for genocide, news sources continue to publish articles like these. The New York Times alone has published several other articles that fail to recognize a sole aggressor, as Diratsouian defined Azerbaijan to be.

The current conflict began on Sept. 27, and since then peace has been far out of sight. The two countries have signed several ceasefires, but none have lasted more than an hour. All have reportedly been broken by Azerbaijani forces. Information about the conflict largely comes out of Twitter, where the Armenian Minister of Defense posts frequent updates. 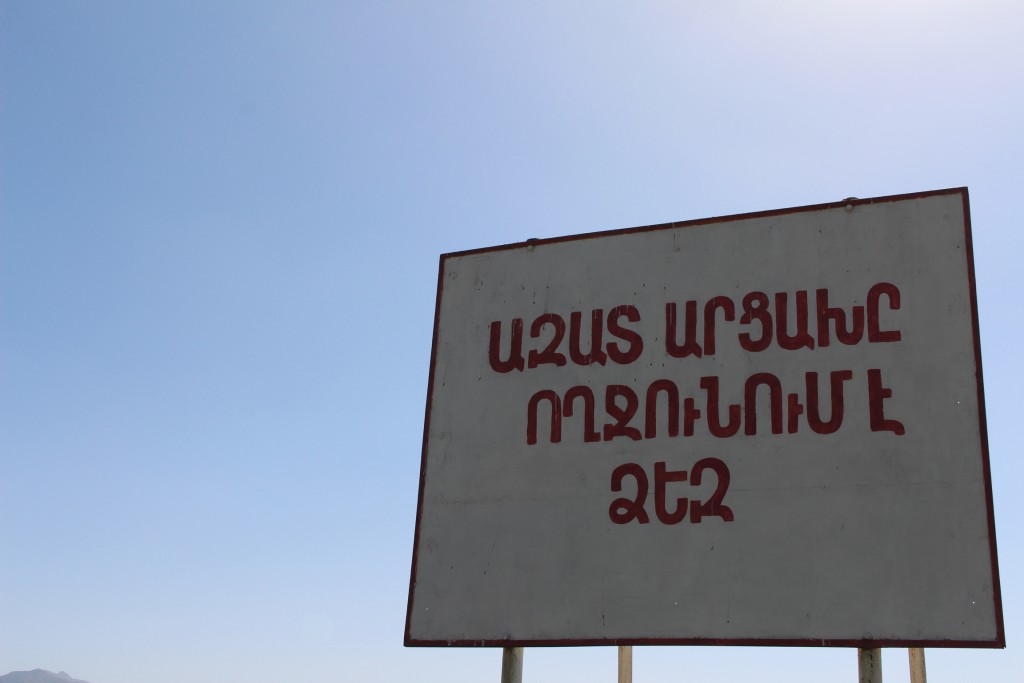 A sign at the entrance to the Republic of Artsakh reads "A free Artsakh welcomes you." Photo Courtesy of Nairi Diratsouian.

America’s Role in the Conflict

Being the world's top superpower, America has a heavy influence in nearly every world crisis, and this is far from an exception. Activists like Diratsouian and Armenian Ramapo student Vano Arouch have been closely involved in working toward pro-peace legislation for Armenia.

However, America is allied with Turkey and has several military bases there, and major oil companies like BP, Exxon and Lukoil all purchase from Azerbaijan.

“It’s pretty much interests over lives,” Arouch said about America’s lack of involvement.

Only last year, the House passed H.Res.296 which formally acknowledged the Armenian genocide of 1915. Diratsouian worked with the ANCA to persuade representatives to vote yes on this resolution, seeing it as the first step in America recognizing the plight of Armenians, however, the executive branch has yet to do the same.

“We got to see the passage of it in the gallery,” Diratsouian said. “Honestly, I started crying because I didn’t think I would see it happen.”

Diratsouian described some of the grassroots work she focused on with the ANCA during her summer as an intern in Washington D.C. She talked about the outreach she did to gain support in her own district for her representative, Bill Pascrell, to vote yes on the resolution. Pascrell had not been expected to vote in favor, but the direct contact from his constituents, thanks to activists like Diratsouian, created that change.

“During this war, you feel, like, very helpless,” Arouch said. “Because your brothers and sisters are literally fighting to keep the lands they’ve been living on peacefully. And then, doing that makes you feel like you’re actually doing something for your case, for the betterment of your people.”

Now, activists are focusing on gaining support for legislation that will benefit Artsakh. Several proposals for pro-peace legislation exist currently, including the Royce-Engels proposals and even more direct resolutions like H.Res.1203, which calls for the recognition of Artsakh as an independent territory.

“Artsakh is Armenian, has always been Armenian, will always be Armenian,” Hacopian said. “No matter who wants to put claims to it on a piece of paper.”

While spending so much of their time trying to enact change in America to help their fellow Armenians, these Ramapo students are feeling the effects of the genocide personally. At the beginning of the current conflict, lists of the dead were being published every day, and Armenians across the world woke up in fear, looking for the names of their relatives.

“One of the times, me and my friend were responsible for translating it to English… so I had to sit there and read every single person's name, and read when they were born,” Diratsouian said, a job she did as part of her work for ANCA Eastern. “Almost every single one of them is younger than us.”

The activist work these students are doing has been taking priority in their lives, their days full of calls to representatives, emails, petitions and donation collections. Arouch and Diratsouian even attended a protest on the George Washington Bridge calling for politicians to recognize Artsakh and condemn Turkey for their involvement in the war.

“Even though I can’t physically be at a protest, I’m doing literally everything else that I can be doing,” Hacopian said.

Many Armenian students have family members in Armenia, and they worry constantly about their safety. Recently, though, the names of the dead have been published less frequently in order to protect the families of victims from being targeted.

“Even though they’re not technically my family, they’re not blood-related to me, I’m scared to wake up and see their name on the list,” Diratsouian said. “In the beginning, I would wake up and cry every day, and I haven’t cried in like, a week, and it’s because I’ve become numb.”

She also said as an Armenian, she feels it is her obligation to pass on the torch, a symbol that relates to Tsitsernakaberd, a monument of the eternal flame in Armenia. A common phrase, she said, is for Armenians around the world to say, “I wasn’t born in Armenia, but Armenia was born in me.”

“I can’t go to sleep at night,” Arouch said. “I’ve been thinking about it every single night.” 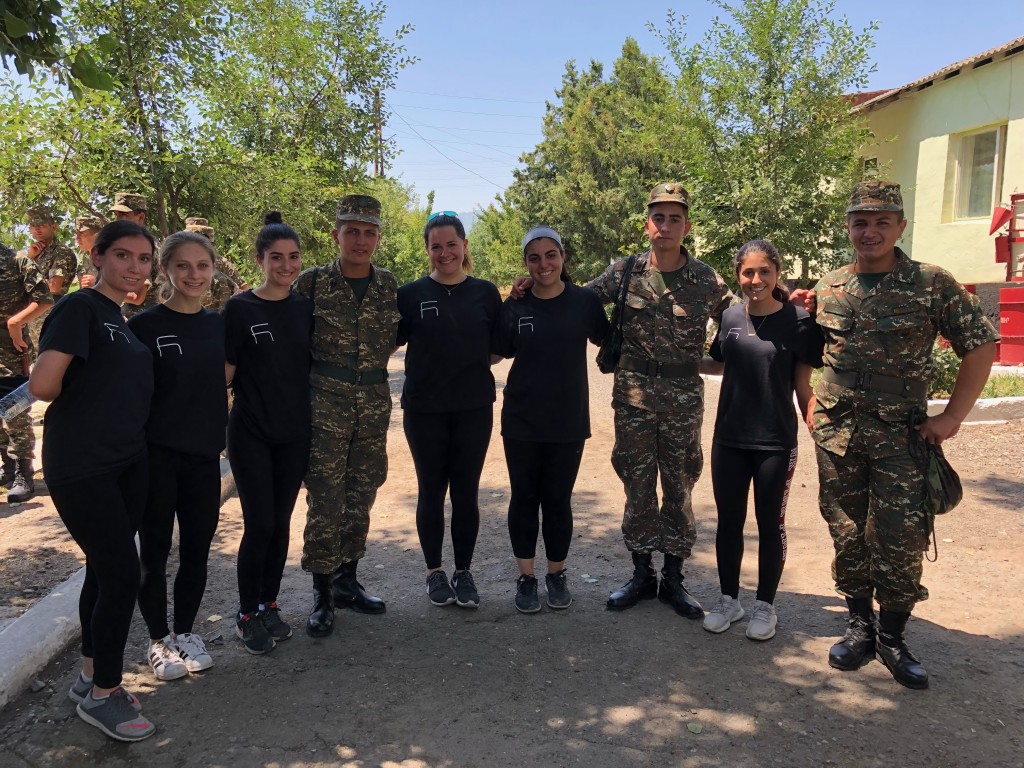 Nairi Diratsouin (center) and other members of Nayiri Dance Ensemble of the Hamazkayin of New Jersey with Armenian troops at a military base outside Stepanakert. Photo Courtesy of Nairi Diratsouian.

Every member of the Armenian Student Association of Ramapo seems to have the same goal for their efforts on social media: that their followers and peers will learn the importance of the conflict and be empowered to show support for Armenia.

“You can spend 10 seconds clicking share on Facebook or Instagram,” Diratsouian said. “Even if you have 200 followers, those 200 followers probably aren’t seeing it at all. You could be the first person.”

Arouch identified social media as one of the main ways today’s conflict is different than those in the last century because it allows non-Armenians to become educated about the issues. He said the first Armenian Genocide of 1915 went largely unrecognized because of the concurrent issue of World War I, and COVID-19 is playing a similar role.

“I hope people do enough research… to know we’re not the aggressors. I hope people are able to tell where the facts come from,” Hacopian said. “If we can teach them a little bit more about what it means to be Armenian, and how to help, I feel like that’s it. I just want them to be aware of it.”

As advocates, these students recognize that if they want to create change, they need help from others. Inspired by her work with ANCA, Diratsouian constantly pushes out action items to her peers, sending them messages and posts that can point them toward reliable information.

She spoke about how important it is that not only Armenians of the diaspora speak up for their homeland, but also non-Armenians. “I’m very hopeful, and I’m very proud of the people in Armenia, but if you leave it up to people who live there, the word isn’t gonna get as far,” Diratsouian said. With a population of only 3 million, and focusing on the physical implications of war, Armenia needs help from the rest of the world.

This crisis is one that generations of Armenians have had to suffer through, and Hacopian said she wants to see a world where Armenians can move forward from their past, but Azerbaijan's aggressor prevents this possibility. With the support of other students, she sees hope for the safety of her people.

“Go ahead, destroy Armenia. See if you can do it. Because when two of them meet anywhere in the world, you will see that they will create a new Armenia.” – William Saroyan.