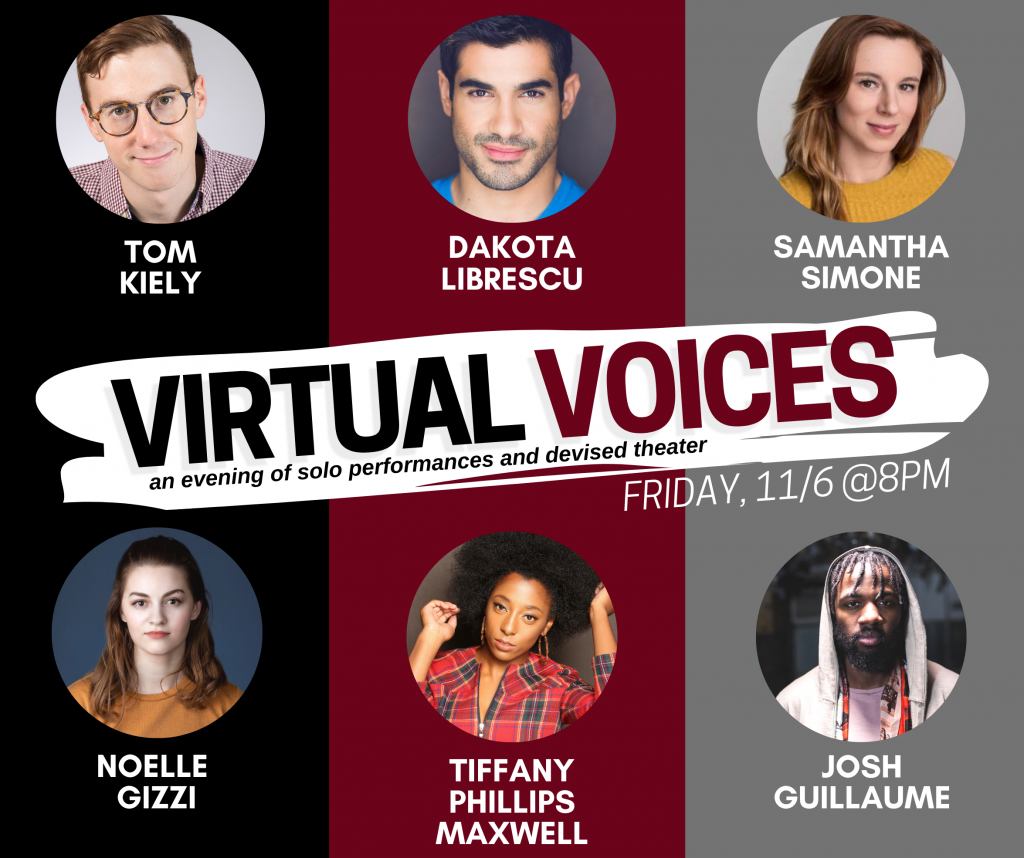 Despite the technical complications of Zoom theater, from sound lags to getting disconnected, “anything is better than nothing,” said Ramapo alum Tom Kiely at the Virtual Voices showcase this past Friday. The event was the sixth in the theater department's virtual season, “Theater Rethought.”

The first performance of the evening was a pre-recorded piece of devised theater, choreographed and edited by Tiffany Phillips Maxwell, who currently owns her own dance company. With about nine volunteers, she created a compelling movement piece over Zoom. The choreography felt random, as have been the selection of events in 2020, and she asked her participants to reflect their reactions to this year through their movements.

Next in the lineup was 2015 theater alum Samantha Simone performing a monologue from “People, Places and Things” by Duncan Macmillan. Simone had attended Columbia for her MFA in acting, during which she felt that Ramapo gave her a leg up by teaching her the importance of saying yes to any opportunity that comes your way—a necessary skill for artists. She later went on to play a recurring role on “Blue Bloods.”

Her second piece of the night was from a television series she created, called “You Follow Me,” which focuses on the lives of people living with invisible illnesses. Simone emphasized the struggle of performing for virtual audiences nowadays. “I’m putting out a theater amount of energy for a film performance,” she said.

Serving as the transitions between each performance were some of Josh Guillaume’s electronic music compositions. He graduated in 2015 with a degree in music production.

Adorned in bright pink blush and an assortment of colorful crazy straws in her hair, recent 2020 theater graduate Noelle Gizzi performed an original, Dr. Seuss-inspired piece that perfectly summarized our feelings about the pandemic, titled “Oh The Places You Can’t Go.” She cheerily spouts off about quarantine, the Australia fires and the president catching the coronavirus. One of her stand-out lines reads,

“The virus is spreading / There’s no sign it’s stopping / That’s why Prozac is my favorite topping.”

Kiely, a 2016 theater alum, warmed our hearts with a laidback performance of “You Me,” an original song he wrote for his girlfriend. In the talkback, Kiely stressed the importance of not saying no to a small opportunity, because you never know where it may lead you. He currently teaches music in high school and has starred in many local musicals.

Instead of a traditional monologue performance, 2020 grad Dakota Librescu opted for a Humans of New York story about an actor and his troubled relationships. He was introduced to the piece by Prof. Vandergaw and immediately fell in love with it. Without any context beforehand, Librescu’s conviction made us question whether this was his own story (that was until he started to talk about being in his thirties).

Phillips Maxwell and Guillaume, who met at Ramapo and are now a couple, closed out the night with a visually stunning and thought-provoking piece entitled “One Rose.” For a virtual setting, the two made use of colored lights and presented themselves almost as silhouettes, as Guillaume’s words spoke to lovers everywhere. The spoken-word artist revealed that while love poems are common in his profession, this was his only love poem. Maxwell supported his lyrics through movement inspired by envisioning a flower.

The group of artists wrapped up the showcase by discussing their post-Ramapo experiences and the technical challenges of virtual theater. Gizzi revealed that her laptop was propped on two stacked pillows, and Librescu described how hard it is to disconnect from the technology in front of you and focus on your performance.

“The one [good] thing to come out of this has been accessibility,” said Prof. Vandergaw during the talkback. The COVID-19 pandemic has fully disrupted the live theater industry, forcing theatermakers to come up with alternative methods for the artform.

If the pandemic has revealed anything to us, it is the importance of the arts. Art can change lives and act as an escape during hard times. Although most of the guests are struggling with their career paths, like all artists during this time, they’ve still found ways to keep the flame alive by generating their own work.