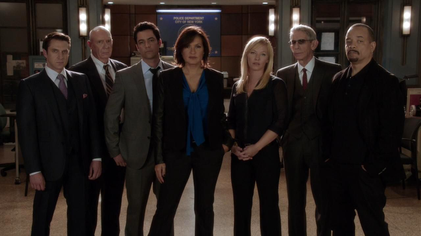 On Thursday, Nov. 12, “Law & Order: Special Victims Unit” returned for its 22nd season. As the clock struck 9 p.m. and viewers heard the famous “dun dun,” the season premiere of the series began on NBC.

At the start of their last season, which aired in late September of 2019, “SVU” claimed the title as the longest running primetime live-action TV show, and they are currently renewed through their 24th season. This is a huge deal for the industry and the “Law & Order” franchise, as they beat the prior record that belonged to the original “Law & Order” series, which ran for 20 consecutive seasons.

This achievement is extremely monumental, and the range of its fan base varies from old to new viewers. This season especially was different than anything “SVU” has done before, but its direct relevance to America’s current climate showed a true effort from creator Dick Wolf and the whole production team.

The episode entitled “Guardians and Gladiators” opened with a "Karen" in Central Park calling the police on a Black man who was nearby, minding his own business. This is a direct reference and recreation of the incident that happened a few months back with white New York woman, Amy Cooper, falsely accused a Black man of a crime, rallying in the police. Right from this point, it was clear “SVU” would be focusing on the tense topics of Black Lives Matter and Blue Lives Matter.

This season directly takes place in America’s current state, and the rest of the season will follow the same way. The NYPD are also in the midst of the current COVID-19 pandemic. Characters wear masks and gloves throughout and even encourage others to wear them when they aren’t – as they should! In court rooms and other scenes, there are plastic shield barriers in between all of the members. There definitely are times where the characters are not wearing their masks as much as they should, but it's at least realistic to those who do not wear masks as often as they should in the real world.

Additionally, the episode directly references the tragic police murders of Breonna Taylor and George Floyd, making the show incredibly real and raw. Because of the protest against the police in our nation, the show takes time to express the ways the lead detective cops are dealing with the backlash, as well as reflecting on their own racial bias.

Liv Benson (Mariska Hargitay) is confronted with the possibility that she is racist in her work, whether she intentionally means to be or not. At the end of the episode, Liv’s son asks her if she is racist, because there is a video of her falsely arresting a Black man going around online, and it is affecting him. This clearly was a way of addressing how personal this issue is, and it definitely was used as an emotional tactic.

This episode was truly unlike any episode fans have seen in the past, and it stems from the uncomfort of the show finally displaying that the police are not always the heroes they’ve been made out to be. "SVU" is not framing police as awful as people in real life may be, but I think this is the show's way of addressing the concerns from Black and anti-police voices, and I think they are trying to use their platform to hopefully educate viewers and address the matter.

As far as the rest of the season, we can look forward to seeing more action on police brutality, Black Lives Matter, the pandemic and, of course, the crazy criminal cases that fans somehow just can’t get enough of.

You can watch the latest episode of “Law & Order: SVU” on streaming service “Peacock” before tuning in next Thursday at 9 p.m. on NBC for the newest episode.