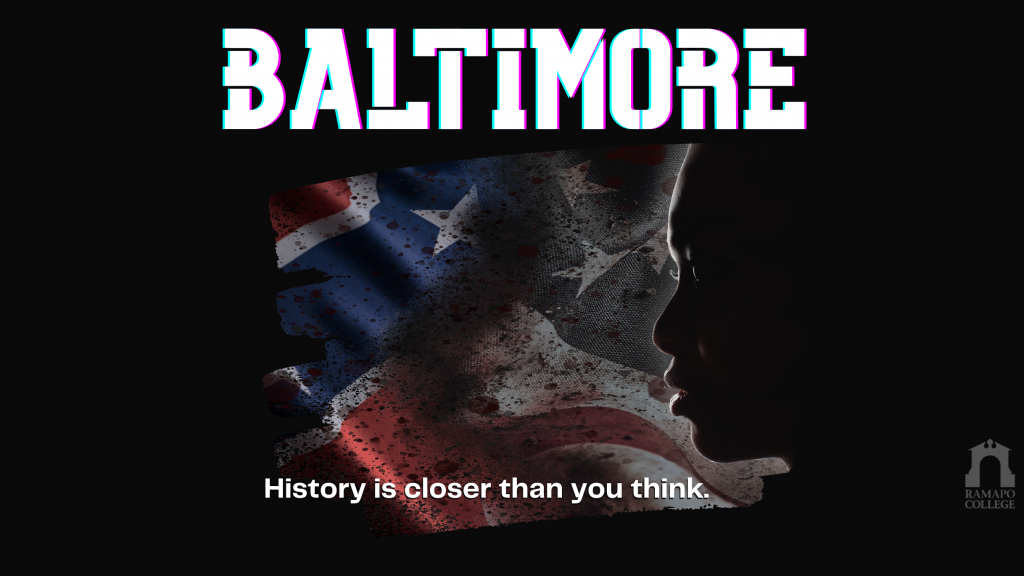 “I hope the audience embraces their uncomfortable feelings when watching it and asks themselves why they feel that way,” says Grace Diaz, a senior theater major who plays Rachel, a Latina-American freshman.

Unlike the first show of the semester, this production was pre-recorded and reads like a movie. Filmed and edited by Reilly Hacker, the final product compiles on-campus shots, Zoom screens, FaceTime calls and multimedia clips to piece together a story that represents our current circumstances.

Led and adapted by a guest director, Lisa Rosetta Strum, the show forces us to think about the presence of racism in our daily lives.

After a white student draws a racist image on a Black student’s door, the entire residence hall bursts into chaos, putting pressure on RA, Shelby Wislon, to handle the situation.

Sophomore acting student Sadiera Esannason plays Shelby, a person she says represents many households that neglect to discuss the racist truth of America. Despite being Black, she believes we live in a post-racial world due to how she was raised.

Shelby turns to her friend Grace (Nicole Aleta), claiming that due to Grace’s Filipino background and upbringing, she is the one most equipped to step in. The conflict between them builds over the course of the show, pressing their friendship.

“It was a joke!” Fiona shouts.

Fiona (Julia O’Toole), the white student who painted the graphic on Alyssa’s door, is dating Bryant (Reginal Wout), who is Black and neglects to see how horrible her actions were, prompting Leigh to ask him in a later scene, “Do you hate all Black people? Or just me and Alyssa?”

Leigh, Carson and Rachel — played by Nia Armour, Vincent DeMeo, and Grace Diaz — discuss how their college purposefully photographs students of color for the admissions brochure in an attempt to make the school look more diverse (which whether they will admit it or not is a tactic that many colleges use).

Carson brings up the topic of not seeing race, Bryant says “not everything has to be a Civil Rights thing,” Fiona claims her skin gets as dark as her boyfriend's over the summer — these are only a handful of topics displayed in the show that arise in variations of racial discourse.

The show’s conversation could not be timelier.

At the time “Baltimore” was selected for the Fall 2020 season, the murders of George Floyd and Breonna Taylor had not yet happened.  This past summer of racial unrest made “this play seems even more of this moment,” said Prof. Daniel Ciba, the show’s dramaturg.

Underlying a movement scene added to the show is a monologue written by spoken word artist Khalisah Hameed. One of the repeated lines says, “Some things just shouldn’t be normal, but that’s life.” With 11 Zoom boxes on screen, the ensemble appears to get sicker and sicker. By the end of the movement, they’ve all put on masks branded with the names of Black people that have been killed by police.

This unconventional, poetic moment not only ties us to our current fight for justice but also establishes that the characters are living in the pandemic.

Nia Armour pointed out how this is one of the first times Ramapo College has featured a specific storyline surrounding BIPOC characters.

“Ramapo College has finally given us a chance to shine… I would love it if people would come support us in one of the biggest moments for us at RCNJ,” said Armour.

“Baltimore” will be streamed again via YouTube on Saturday, Nov. 21 and Sunday Nov. 22 at 8 p.m.  At showtime, you can view the production here.  In the video description are supplemental materials and a link to register for the talkback after the last performance.