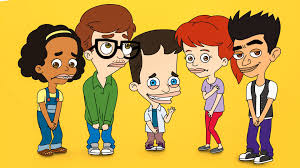 This season follows the characters as they enter the eighth grade. As expected, the show came back to its audience with the dark humor it's been known for since season one. Although overall the manner of delivery was better-developed, there were a few times where I had to pause the show just because of unexpected events that occurred all at once.

Besides the jokes, another thing I admired about “Big Mouth” this season was the focus on mental health and identity. This was lightly touched upon last season, but not to the depth we received this season. We are introduced to Tito the Anxiety Mosquito and she partners up with the Depression Kitty. They follow Jessi Glaser, amongst other characters, and it was interesting to see her journey through life with them.

At the start, she gives in, easily allowing them to have complete control over her life, such as influencing her to skip school and feeling pressured to engage in sexual activities. Our other character Nick Birch goes through a similar experience, but only with Tito the Anxiety Mosquito. Tito convinces him to believe he is a burden to everyone around him.

By the last episode, Nick and Jessi both learn to stand up for themselves with the help of the Gratitoad. Gratitoad teaches them to try their best to fill their minds with positive thoughts and to defeat negativity by fighting against it. This was a great message for the show to give its viewers, and it did so in a believable manner.

In the end, Tito and Kitty are not completely defeated—they only get smaller. Telling viewers “Yes! You can fight back but the battle will never be over!” is a much more realistic message, especially for teens going through puberty and harsh times. Most shows would’ve ended the episode making the mental health issues disappear completely, but that would create the false belief that depression can be magically cured.

In additional to a strong focus on mental health, the writers made identity a big plot point. They introduced their transgender character Natalie and had her tell her coming out story, which was a great way to enlighten the audience and be inclusive in regard to gender. Biracial character Missy also had a big role in this season, mostly spent learning more about her culture and racial background and becoming more accepting of it.

“Big Mouth” may be seen as that gross, hypersexual show, but it has taught many people more about sex than any sex education class most of us have taken through the United States education system. It can bring up harsh topics in a humorous way so no one will feel uncomfortable, as most people would while having “The Talk” or any conversation surrounding sex, sexuality, identity and growth.

The characters are getting older and it can be expected that things will change and become more serious as the show progresses. I cannot wait to see what we will be able to experience and connect with as we hopefully receive new seasons down the road.