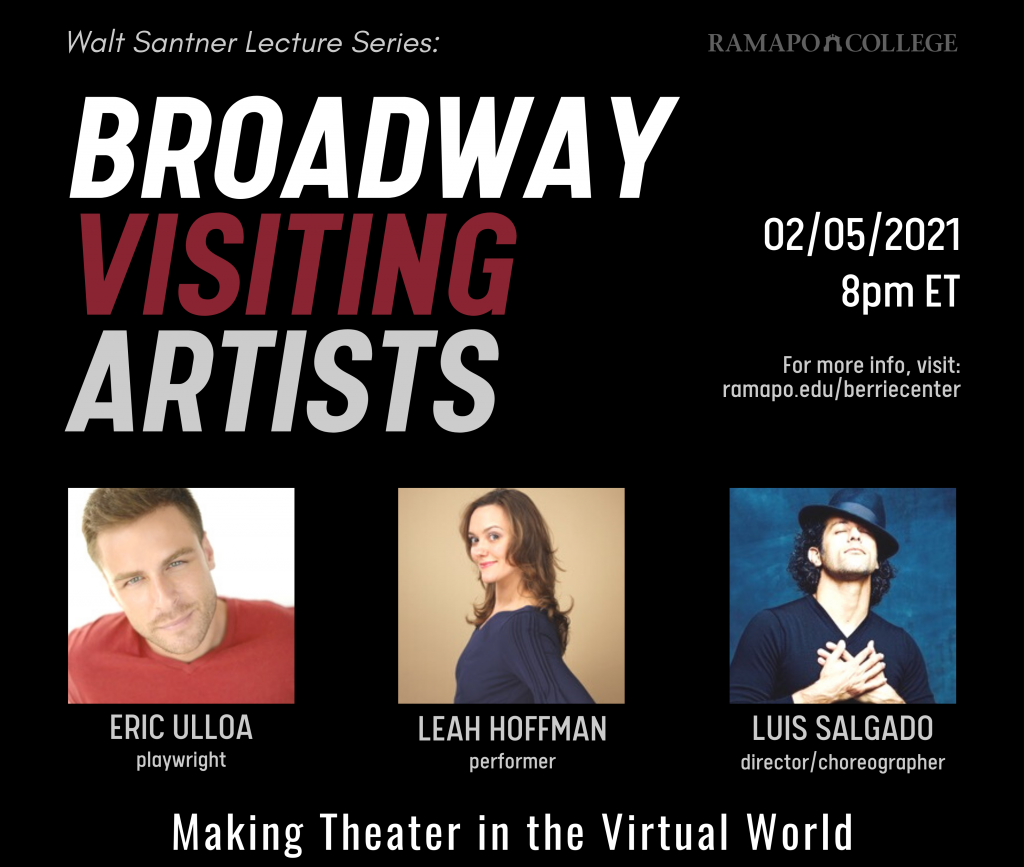 When the shutdown first happened, Broadway performer Leah Hoffman experienced a gradual cancellation of projects. During the first week, everyone in New York City was frightened, wondering where they should go to stay safe. After a small period of innocent bliss, theater artists began to ask themselves where they go from here.

This means of survival was the topic of Ramapo College Theater’s latest virtual event, the Visiting Broadway Artists panel on Feb. 5. With over 40 attendees, the event featured Hoffman, playwright Eric Ulloa and director/choreographer Luis Salgado.

Visiting Broadway Artists is an organization that connects young artists with Broadway professionals. The Friday event was made possible through Ramapo’s Walt Santner Lecture Series.

This is the first pandemic our generation has dealt with, and “it’s not something we know,” Luis Salgado said, who called into the meeting from his Puerto Rico home. Salgado worked as a choreographer for the original Broadway production of “In the Heights,” and he is especially proud of his recent work as a choreographer for Cirque du Soleil.

Known for her work in “War Horse,” “Something Rotten!” and as a Rockette, Leah Hoffman said that as artists are reinventing themselves, they have to “literally think outside the Zoom box.”

After the first few weeks of bumming around in his apartment watching Netflix and eating too much—everyone’s initial quarantine—Eric Ulloa dove into a ton of new projects. One of his plays, “26 Pebbles,” was virtually performed by a high school, and to his surprise, it worked wonderfully. He received more and more requests for licensing. He now describes his professional life as “joyfully skipping into a nervous breakdown.”

All three of the artists agreed that as they try to maintain their careers with a large array of online projects, making time for self-care has been one of the biggest challenges.

Hoffman pointed out how everyone in theater suddenly came to a level playing field as they began transitioning the industry to the online world. As a teacher, it was her young students who taught her how to use Zoom. Salgado had a similar experience, where teaching free theater classes online became his Zoom training.

With virtual readings, shows and concerts under their belts, the three shared their thoughts on what makes a virtual production successful.

Given that in many virtual shows, actors have to take care of their own props and costumes, Hoffman realized that an audience is not only charmed by a piece and the characters, but also the actors and what they’ve gone through to set up their own theatrical setting. She also supports “utilizing Zoom to its limits” and playing with the humor that comes with the video boxes.

On a practical level, Salgado says it is crucial that everyone has a good internet connection, claiming that a show is only successful if “the gods of the cyber world” allow it. He appreciates virtual shows that have interactivity because it allows everyone involved to feel like they're sharing an experience.

Ulloa prefers pre-recorded online productions because there is less room for technical errors and more room for creativity. In his opinion, the key to making an online show work is to find something within the show that makes the audience say, “Of course it’s meant to be virtual,” such as placing the characters in the pandemic or making it clear that they need to communicate virtually for whatever circumstances.

The artists anticipate that some virtual theater trends will persist once life is back to normal. For instance, with large open-call auditions, choreographers may save time by uploading a routine for all the performers ahead of time and have them come in ready to dance.

Regardless of where the industry is headed next, innovative artists like these are to thank for keeping the industry afloat in unpredictable times.

“History will say that the artists rose to the damn challenge," Ulloa said. "The artists did what they always do."