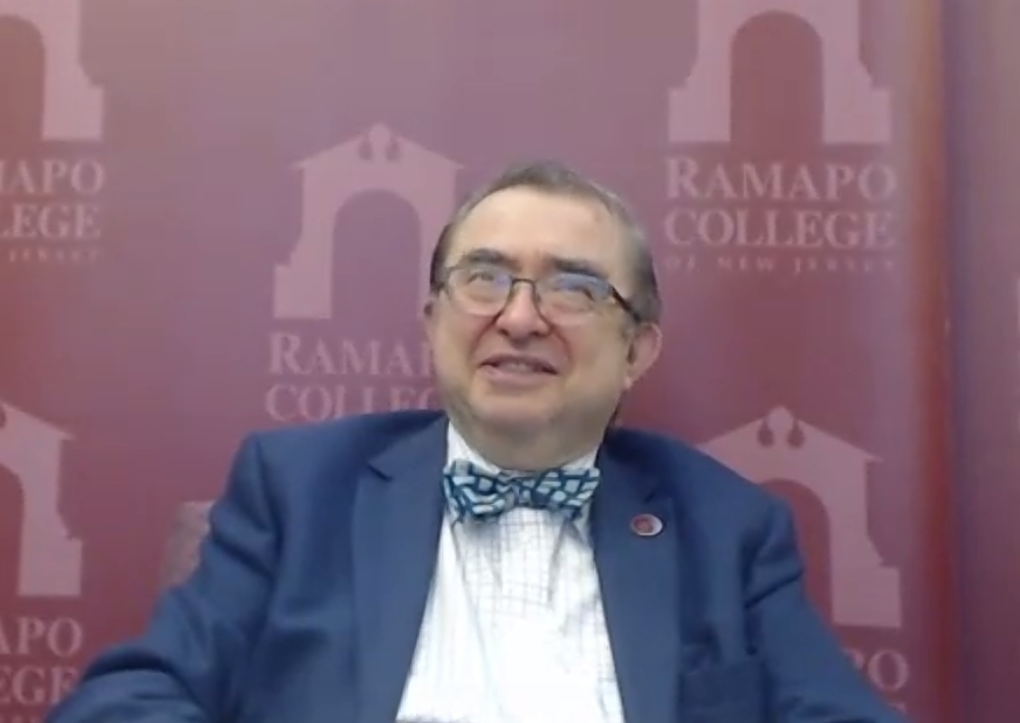 President Peter Mercer delivered his final State of the College Address via WebEx on Wednesday, Feb. 24 at noon. There were 280 viewers in attendance.

The address was opened with President Mercer recognizing the recent struggles that Ramapo has had due to the coronavirus pandemic. However, Mercer notes the perseverance that the college has flaunted.

“Imagine what would have been the consequences if we raised our hands and surrendered to the COVID-19 virus,” Mercer said.

Financial hardship has been a lasting side effect of the digital era, and Mercer doesn’t deny that minimizing funding has been a focus of his.

“I suspect that if you ask any group of public college presidents what they need to do a better job, they would agree while money isn’t everything, it’s way ahead of what’s in second place,” he said. “Financially, we have suffered significant losses.”

There is some hope, though. President Joe Biden has recently revealed his “Beyond High School” plan, where a $50 billion budget will be used for the benefit of colleges and universities across the country. Mercer expects Ramapo to receive approximately $3.5 million.

President Mercer then went on to give recent updates on the college, which started with him addressing “rumors” that Ramapo College is going to be “taken over” or merge with another college. He states that these rumors are entirely false.

“The reality is, Ramapo is doing very well,” Mercer said. He announces that the amount of incoming students that are expected to enroll in the fall is comparable to the size of our recent record-breaking classes.

Another improvement on campus is the soon-to-be Learning Commons, which will sport Mercer’s name when it opens in six months’ time.

Mercer recognizes Ramapo’s three current presidential candidates, and he wishes them all the best of luck.

“I met all of the candidates, and I look forward to seeing who the board chooses,” he said. Mercer is “confident” that the choice will be the best decision for the sake of the college.

During the Q&A session of the State of the College, he was asked to elaborate on his thoughts towards the succeeding president.

“What would be your best advice for the incoming president?” asked Professor Paramjeet Bagga, who served on President Mercer’s search committee and serves on the current presidential search committee.

“Don’t try to do too much too soon, but learn what you can about the inner workings of the college first,” Mercer said in response.

The future for Mercer is currently simple: move to California and make occasional trips to Vancouver and, of course, Ramapo College. He considers the possibility of writing a book when asked.

The most common question during the Q&A, moderated and noted by Chief of Staff and Board Liaison Brittany Williams-Goldstein, is what the president will miss the most once he leaves Ramapo.

“I think what I will miss most is introducing it to those that are unfamiliar with it,” Mercer said. “And the reason why I will miss that the most is because it was the most rewarding.”

At the end of the Q&A session, many wish President Mercer and his wife, Dr. Jackie Mercer, well as they move on to a new chapter in their lives.

In his closing remarks, Mercer has a message for the current staff as well as the president that follows him.

“I want to thank everybody for their good wishes, assure you that I will be back after my retirement, and I hope that you will put your energies behind the new president and support her plans where you believe the support was warranted and gently explain why you wouldn’t if you think it’s not,” he said.