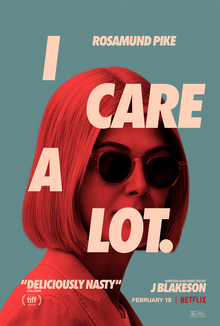 New Year, new movies on “Netflix,” the same questionable quality of their content and the same mentality of just throwing everything at their audience, hoping that the sheer amount of new content will mask the fact that most of it are of low quality.

“I Care a Lot,” written and directed by J Blakeson, is the newest one of those projects. The film's Wikipedia page likes to call it a "dark comedy thriller," ignoring the fact that it is barely a functioning movie in the first place, let alone a good mixture of genres.

It starts off as an over-stylized con-artist movie, poorly copying the likes of Edgar Wright and Danny Boyle, but it still seemed to be an entertaining watch at first.

The story follows Marla Grayson, portrayed by Rosamund Pike (whose talent is honestly wasted on such an amateur script), as she gets guardianship of elders, puts them in homes and then resells their assets and possessions, taking all the profit to herself.

What I did not know at this point was that the scenes where Pike villainously smiles and commits horrible deeds to these elders would be the best that this movie would give me.

By its half-point, “I Care a Lot” completely loses its direction, and stumbles from one unbelievable and shallow moment to another. The characters and their actions stop making sense, and the direction, which was at least occasionally unpredictable up until that point, becomes completely bland.

The soundtrack by Marc Canham, aside from sounding like it was mourning the recent “Daft Punk” split by creating a mediocre tribute, started off promising, just like everything else in the film. By the end of the narrative, it became a repetitive cacophony of sounds and as aimless as the plot.

The only saving grace could have been the performances, especially the ones by Pike, Peter Dinklage and Dianne Wiest.

Pike always excelled at playing complex, morally ambiguous characters. That is why it became continuously disappointing to see that her character’s writing hid no complexity or ambiguity Blakeson seemed to promise us at the beginning.

As I was already becoming slightly bored with Pike’s character just winning at everything she attempted, I thought the introduction of Dinklage’s unhinged mob boss would give Pike the counterbalance she needed.

While Dinklage’s methodical and measured performance, with tons of subdued rage, was mesmerizing to watch at first, it slowly loses its charm as well. His delivery of even a single line is lengthy in time, contributing to the film’s runtime of almost two hours, and it felt even longer.

Wiest was the only one whose performance I wanted more of, as she masterfully juggled between playing a helpless old lady and a calculated, threatening presence. The only negative is that her character disappears at about the same time the rest of the film takes a nosedive. Maybe the lack of Wiest’s character had something to do with the titanic drop in quality.

The movie was not objectively the worst piece of cinema made, it just disappointed me so much with how meaningless and boring the second half as compared to what I was tricked into expecting at the start. I would have rather spent the whole day watching Guy Ritchie’s critically and commercially panned “Swept Away” because even at his worst, Ritchie at least makes me care about his films.

The only thing I cared about while watching this was how much time was left until its end, and until “Netflix” skipped its credits and offered me another mediocre project I could waste my time on.