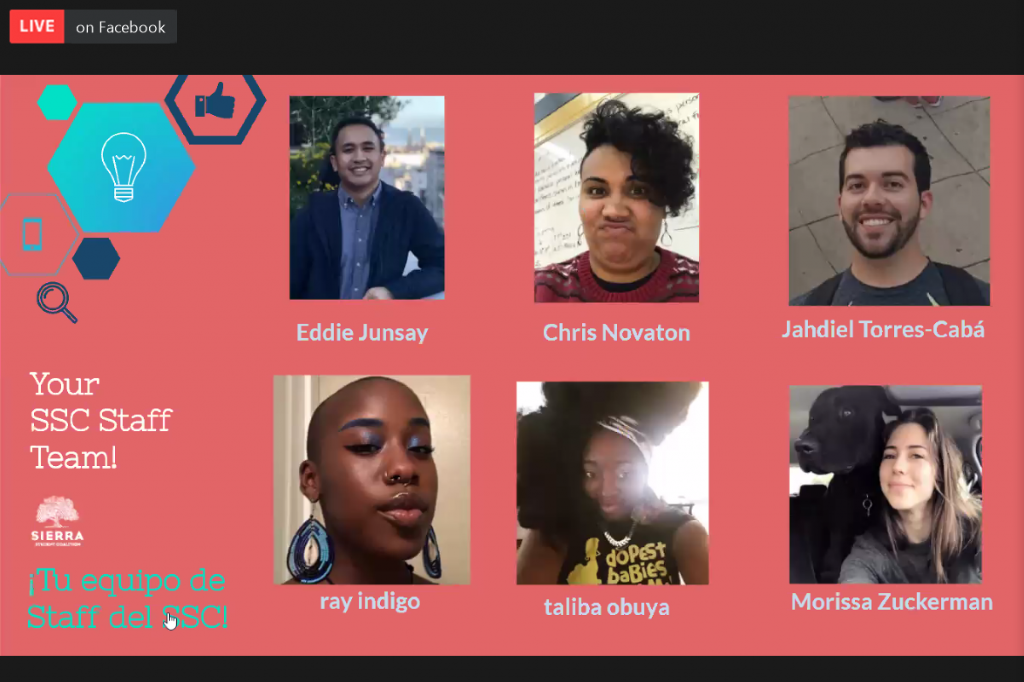 This past Thursday night, the Sierra Student Coalition Spring Open House virtually welcomed attendees from different high schools and colleges across the country. In 1991, Adam Werbach and other young people he had worked with to promote green legislation in California founded the SSC on the idea of training future generations as environmental activists.

Currently led by Taliba Obuya, Morissa Zuckerman, Eddie Junsay, Chris Novato, Jahdiel Torres-Cabá and Ray Indigo, the meeting upheld the mission statement: “The Sierra Student Coalition is a network of young people across the country working to protect our generation’s future. We train, support, and organize youth to run effective campaigns and develop as leaders in service of movements for climate, racial and economic justice.”

2021 marked the 30th anniversary of the Sierra Student Coalition. All quarterly events during the coming year, with that night’s meeting being the first, will pay homage to three decades of hard work. The coalition leaders also invited members to participate in a storytelling project where they would be welcome to submit stories, memories and pictures of work the coalition has done. All submissions would be posted on the SSC social media feed to encourage others to join.

Next week will mark the start of their Climate Justice Academy, an eight-week program focusing on organizing activism opportunities around Earth Day, May Day, and the first 100 days of the Biden Administration. Applications are closed, but those who potentially want to apply next year can learn more about the program.

For those who cannot wait to take action, the SSC’s online summer program is recruiting and coming up soon. Participants will train in improving their organizing skills, political education, disability justice, phone banking and media pitches. They will also partake in conversations about sustainability regarding race, class, and gender. Applications for those interested in being lead trainers are open. Applications for those interested in being participants will release in May, but general information about the program is available.

SSC leaders described another campaign they supported, #YouthTHRIVE. THRIVE stands for “Transform, Heal, Renew, by Investing in a Vibrant Economy.” Its mission centers on creating a space for youth voices and visions to work toward climate, racial, and economic justice. The audience watched a video describing how the campaign fit within the framework of the Green New Deal, and how members can work to put pressure on the Biden administration to ensure changes are made.

“Not only is it important that the people who are being most impacted and young people being included, but that they are at the front,” said Morissa Zuckerman.

Information about #YouthTHRIVE and opportunities to take immediate action is available here.

Those interested in participating or learning more about the Sierra Student Coalition can sign up for the monthly newsletter and join the main Slack. For those who wish to make the world more sustainable and inclusive, working together in larger organized groups can provide some of the best and most effective opportunities to turn those dreams into reality.