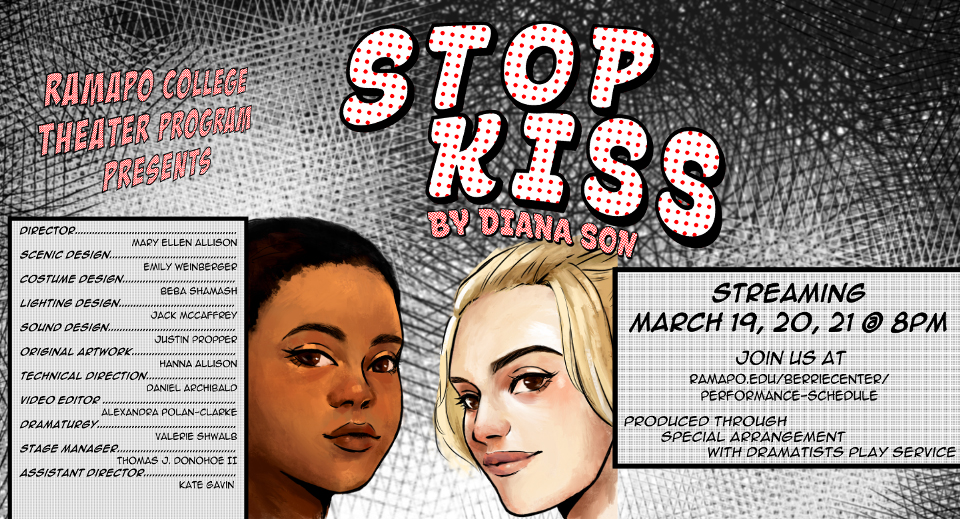 Common areas and individual dorm rooms were transformed into stages last weekend when Ramapo’s theater department live-streamed a virtual production of “Stop Kiss” by Diana Son. The play tells the story of finding love in unlikely places and dips into topics like homophobia and hate crimes.

“How do you do a play about a kiss socially distanced?” director and theater professor Mary Ellen Allison asked when she first fell in love with the play. With the idea of a drawing, Allison ran to her daughter’s room, asking if she’d draw manga-inspired images for the virtual production.

The story takes place in 1998 in New York City and follows Sara and Callie as they navigate their new friendship and come to terms with their feelings. “It’s about these two wonderful people discovering each other,” says Allison. The story structure jumps back and forth in time between past and present, declaring just in the second scene that Sara was attacked while she and Callie were out at night. At the climax of the play, we learn the attack was motivated by seeing Sara and Callie share a kiss in the park.

While the majority of the scenes were done live via Zoom, still images of manga comic panels, illustrated by theater student Hanna Allison, played over pre-recorded dialogue to start and finish most scenes. Not only did this allow for moments of intimacy to be displayed, but it also gave the actors more time to transform their individual sets during scene transitions.

The stage manager, Tom Donohoe, a senior theater major, said that as they teched through the show, they figured out how much time was needed for each transition and quick change.

“There are so many things as an actor during a show that you don’t take into consideration,” said Julia O’Toole, who plays Sara. The entire cast worked closely with the scenic and lighting designers, Emily Weinberger and Jack McCaffrey, who had to guide them over the screen on how to set things up properly.

Each actor received matching backdrops, matching props, a homemade dimming box, lamps, and gels to create cohesive settings. They were in charge of moving to different locations within their space, setting props, and turning their lights on to the appropriate settings for every scene.

“Everyone became a technician and designer,” said David Mendoza, the assistant lighting designer.

Grace Diaz’s character, Callie, was in every scene. She said she had many close calls, where she finished changing her technical aspects right as her camera was turned on.

Noah Frank, who played Detective Cole, put notes all over his props with lighting and camera instructions. Melanie Tischler, who played Mrs. Winsley, commends the tech team for all of their impressive work.

“We asked the actors to do so much on this show,” said McCaffrey. “They handled it like absolute champions.”

Let’s not forget that on top of all their technical responsibilities, they had to act alone. Vincent DeMeo, another supporting actor, made his eye line for Callie a lump on his bed and his eye line for Sarah a box of San Pellegrino.

“I’ve never made so many heart eyes at a bullseye on the wall in my life,” jokes O’Toole.

The entire production process took place over Zoom. Assistant director Kate Gavin recalls visiting O’Toole’s on-campus apartment to give her a prop when she realized that despite having bonded with the cast virtually, she had rarely met any of them in person.

One technique helped the actors during early rehearsals: Allison had them disregard blocking and look at each other on-screen while delivering their lines. This gave them a chance to better connect with each other and observe their reactions. In the end, you would never have guessed that no actors rehearsed in person during the process.

Though it was challenging, Diaz calls the production rewarding, saying it will prepare her for graduation and the ever-growing world of virtual theater. “I’m really thankful to have that experience.”