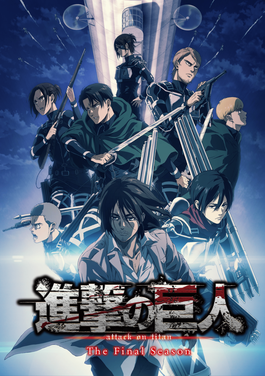 Ever since its anime debut in 2013, “Attack on Titan” has been a phenomenon both in its own medium as well as a pop culture mainstay. Despite the fact that there was almost a four-year break between its amazing first season and the shortened, mostly lackluster second season that aired in 2017, the popularity never seemed to wane.

For those who have somehow not heard at least the basic premise, the story is set in a world in which humanity is trapped within large walls as they try to evade being eaten by huge humanoid and mindless creatures called Titans. As the seasons continue, the story becomes progressively more layered and complex, introducing political intrigue and basically fully changing its genre towards the end of season three.

That third season, airing from 2018 to 2019, was widely and almost unanimously recognized as the best the anime offered so far, and many were eagerly awaiting to see how it would all finish in its fourth and final season (at least those who had enough willpower not to start reading the original manga to see how the story goes on).

The final season began airing in December 2020, marketed as only its first half, but it was not certain whether the second half would be released. Luckily, it was just announced that the second half of season four will be broadcast in winter 2022, although nobody is quite sure whether this means January or December of that year, which makes quite a difference.

Ever since the first episode of the new season, the online speculation and fan interaction has been reaching levels of engagement that were not seen before for any anime, and which rivaled television titans like “Lost” and “The Walking Dead” at the height of their popularity.

This is even more impressive because the final season begins with completely new characters on the other side of this world, and yet still stays as engaging as ever. Aside from still being the best example of a dark fantasy and post-apocalyptic action in recent memory, regardless of the medium, the final season of the anime is also the perfect blueprint on how to successfully and respectfully adapt a source material.

Hajime Isayama, the creator of the original manga, and also the writer for the anime, remained the essential ingredient behind the commercial and critical success of his story in both mediums.

Issue 139 of the manga—the last issue ever—is finished, as confirmed by Isayama’s editor on Twitter, and regardless of how one consumes the story of “Attack on Titan” (in Internet terms, whether they are manga readers or “anime onlys”), the release of that last issue will mark an end of an era.

The biggest change when it came to the production of the final season was the fact that the animation studio switched from Wit Studio to MAPPA. A big part of the fandom faced this change with considerable skepticism, but MAPPA proved with these first sixteen episodes that they were absolutely the right choice to finish this epic, both in storytelling and animation aspects.

Both the manga and the anime are still of the highest quality, and a perfect entry point for anybody trying to explore the anime medium, especially because it lacks the usual stereotypical anime reactions and humor, which are an acquired taste. If the ending manages to stick the landing, “Attack on Titan” will cement itself as one of the most important fantasy narratives in popular media ever.