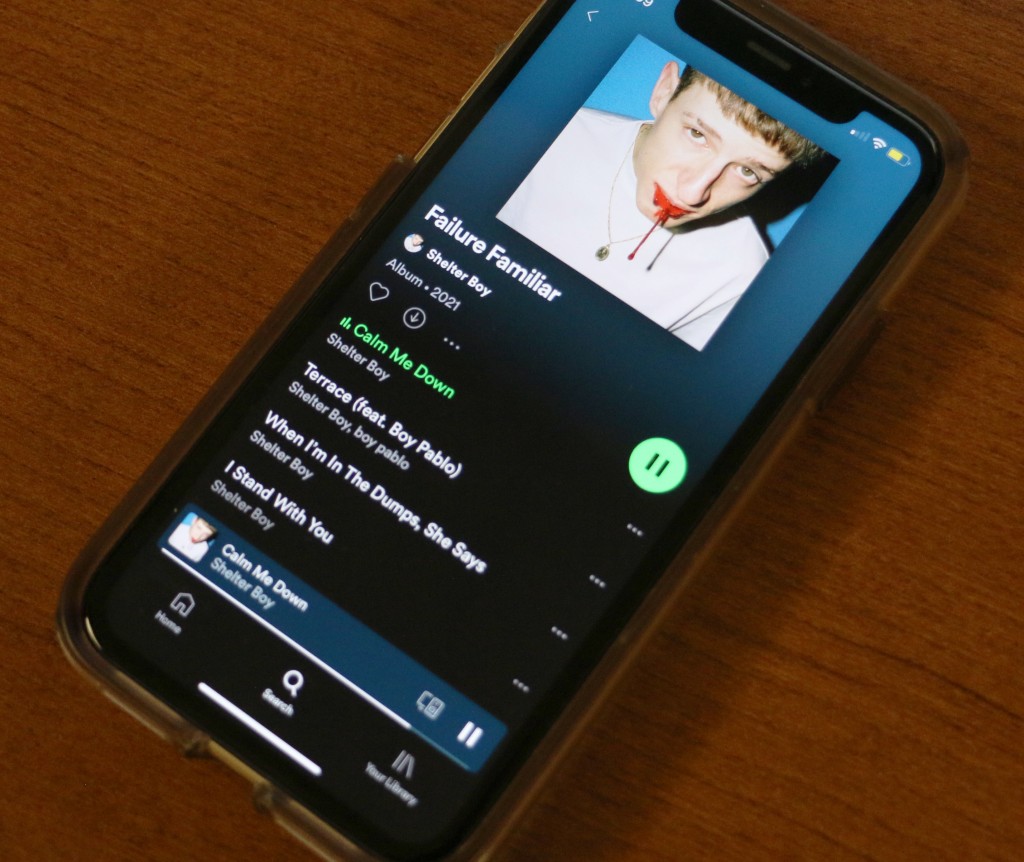 While Spotify can be incredibly buggy and filled to the brim with Joe Rogan ads, it is also incredibly useful when it comes to discovering some magnificent underground artists.

One of those hidden musicians is most definitely Shelter Boy, the name of German singer Simon Graupner’s musical project. He just released his newest album called “Failure Familiar,” which definitely deserves to be promoted by Spotify on all fronts.

Not a lot of certifiable information can be found on Shelter Boy’s life, but what is clear and undeniable is his talent, which pours out of every single song on this 34-minute-long album. In fact, Shelter Boy is so underground that not all of the songs from this album have lyrics completed on Genius, the go-to website for when mumble rap becomes too mumbly and you have to read the verses because you can’t hear them.

“Failure Familiar” opens with a song called “Calm Me Down,” which openly contradicts its title with positively chaotic vocals and production. The main guitar riff is both catchy and mellow, foreshadowing the two-sided sound that will mark the rest of the album, seamlessly combining mainstream-sounding instrumentals with disturbingly honest lyrics and haunting vocals.

The second song on the album is titled “Terrace” and features an artist called Boy Pablo. This is where the album becomes fully confident and stays that way until its end.

The song itself sounds extremely familiar to anybody who has ever turned on a radio, but once the chorus arrives, the depth is unearthed: “Sittin’ on our terrace, terrace, our lives will be beautiful and all.”

Seeing these lines on paper, they seem comically common, but once it just trails off with the “… and all,” showcasing the aimlessness that Shelter Boy seems to feel, it becomes clear how well this artist combines simplicity with poetry.

The album continues with “When I’m in the Dumps, She Says,” a spoken word piece that beautifully leads into songs like “I Stand with You” and “Atmosphere,” the latter piece being another upbeat masterpiece with dark lyrics such as: “Lost your patience, lost your chance. I miss you, I missed my plans, please don’t tell me how to feel alive.”

Once again, Shelter Boy introduces the chorus with a familiar line, only to attack the listener with some brutally honest confessions in the second half. Perhaps that was the goal of “Failure Familiar,” to lure in the listener with the instrumental familiarity, and to disarm them with poeticized failure hidden within the lyrics.

The other songs on the album follow a similar pattern. Another standout is the song “Absence,” in which Shelter Boy confesses the following: “I turn my absence into my fear.” It seems that he also turned that fear into extremely personal and well-constructed art, hopefully achieving some of the fulfillment his songs will give to his listeners.

The only weak point of the album is that it does nothing new for listeners that are familiar with artists like Oasis or Mac Miller who have, very obviously and heavily, inspired Shelter Boy and his latest project. Though the album does come close to perfecting this subgenre.

“Failure Familiar” does sound familiar, but it most certainly does not sound like a failure. In fact, it is a roaring musical achievement.

At this point in his career, Shelter Boy is still a relatively unknown artist, but I am confident that anybody who gives him a chance now will be able to play the hipster “I knew him before he was famous” card in five years, when Shelter Boy begins filling concert halls worldwide.