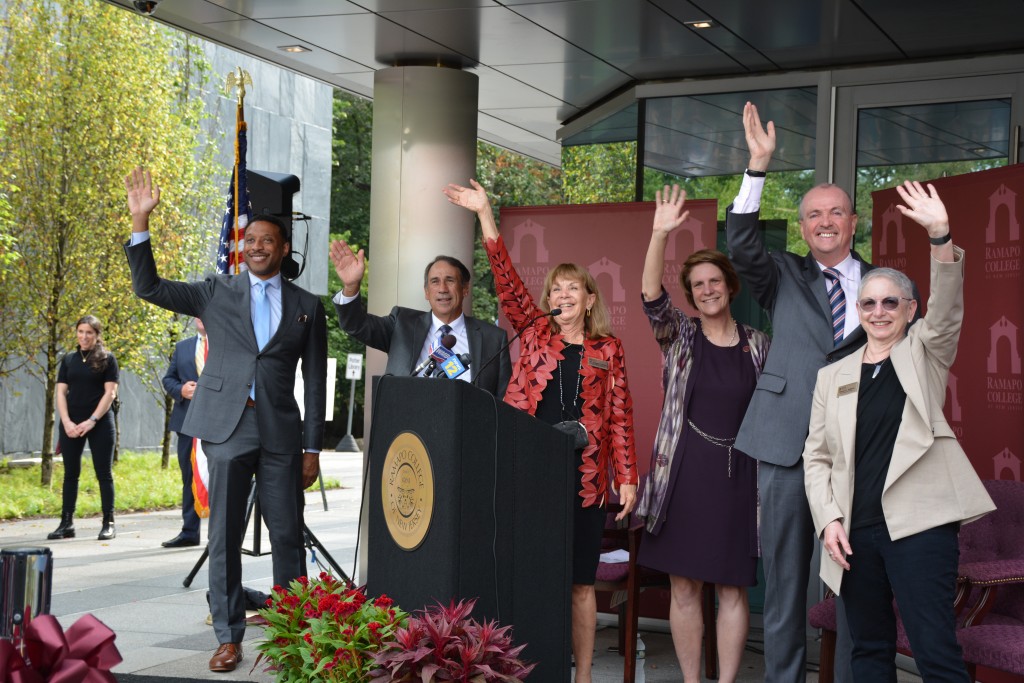 The third and fourth floors were opened for tours Wednesday, while the first and second remain under construction.

Murphy noted there has been a years-long pattern of students leaving New Jersey to attend college, but he declared that the Learning Commons is “a huge step in the direction of keeping our great talent right here in New Jersey.”

Each distinguished guest took a moment at the mic to speak about Mercer’s legacy and the value of the Learning Commons. Jebb and Chair Susan Vallario acknowledged that this endeavor was the result of Mercer’s bold vision and dedication to Ramapo for the last 16 years. Unfortunately, Mercer was unable to attend the event due to scheduling conflicts, but he left a note for Vallario to share, where he, of course, cracked a few jokes.

Dr. Brian Bridges shared that he was proud of the state of New Jersey for investing $15 million into this innovative addition to campus. The contributions of all the generous donors are honored inside the building on two walls of plaques labeled with donor names.

The entire Learning Commons features four levels of open study spaces with computers, 450 outlets for charging devices, 19 private study rooms, four print and copy rooms, 18 gender-neutral bathrooms and four water refilling stations. Each floor is laid out the same way for easy navigation. The Starbucks cafe from the Berrie Center is now moving into the Learning Commons and is to be renamed “Common Grounds.”

The Center for Reading and Writing, Information and Technology Services and the Gross Center for Holocaust and Genocide Studies all have new homes throughout the building. Murphy made a special acknowledgment of the importance of the Gross Center considering the recent rise in anti-Semitism. The newest addition is the 530-square-foot “maker space,” which serves as a lab room for student creations and will house 3D printers and a laser cutter.

The large oculus is the focal point of the building and connects the third and fourth floors. Along with the natural lighting it provides, the entire building uses LED lights with occupancy sensors to save energy, and the Ramapo edible garden will be housed right outside the building.

MBA student Jennifer Seitis was around when the old library was still open and sees the new Learning Commons as a great benefit to current and future students. “I think it’s really useful to have so many resources all in one place,” she said. Though she and others miss the old library, part of the old ceiling has been recycled into the roof of a large faculty conference room. There will be a sign under the oculus honoring the legacy of the George T. Potter Library.

With amazing views, amenities and study areas that include bean-bag chairs, it will definitely become the hot new place on campus, once officially open.

“It will be a really useful place for not only students but the entire Ramapo community,” said Seitis.