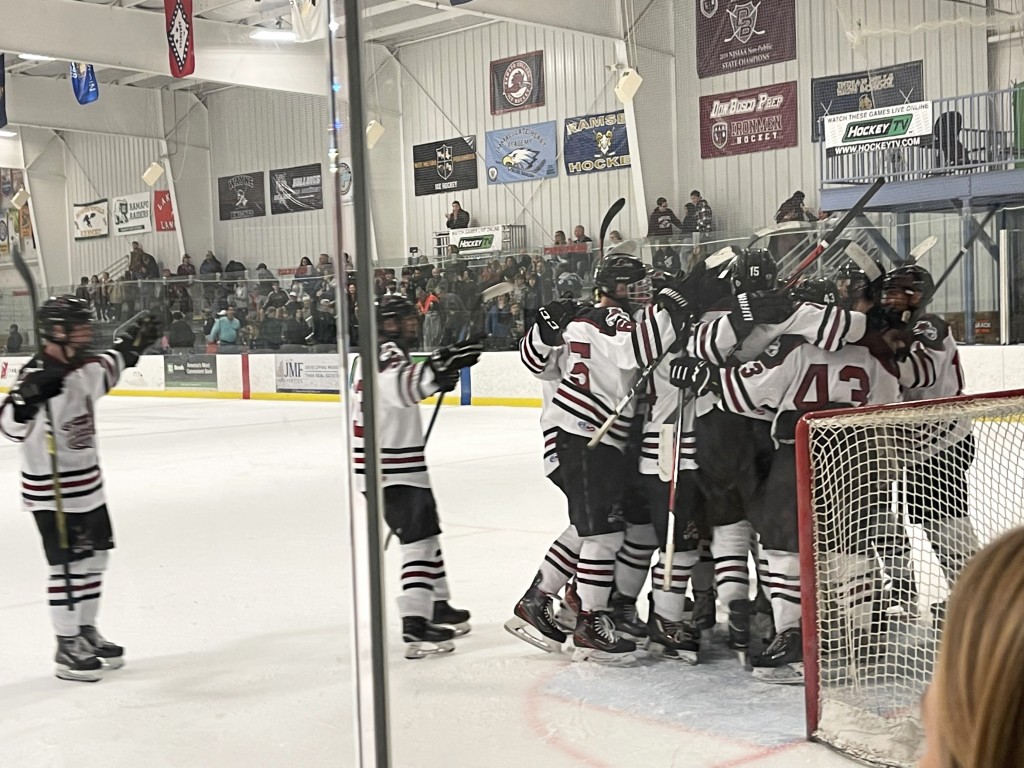 The Ramapo College ice hockey team kicked off its 2021-2022 season with a 7-5 victory against its rival Fordham University on Saturday. The energy could be felt all throughout the Ice Vault Arena in Wayne, N.J. as fans from both Ramapo and Fordham filled the stands for the season opener.

It was a slow start for Ramapo as they fell into an early 3-1 deficit thanks to goals from Fordham’s Aidan Graham, Trey Leo and Michael Hatch. Alternate captain Eddie Dahdah scored the lone goal for Ramapo in the first period.

“That game was 18 months in the making and we had quite a few new players in the lineup,” said Ramapo head coach Mike Winters about the slow start. “It took us the first half of the first period to calm down and find a rhythm.”

However, it would not remain that way for long. Midway through the second period, things started turning around for Ramapo. A second goal from Dahdah and a goal from captain Luke Campomenosi at the end of the period led the game into a 3-3 tie going into the second intermission.

The third period is when Ramapo started taking the lead. Two consecutive goals from alternate captain Christopher Dressler gave the team a two goal lead before Fordham scored to bring it within one. Junior Thomas Moskal netted one, giving Ramapo an insurance goal, and Shane Lovell put the finishing touches on an impressive win.

Dressler ended up with a game high of four points. Rick Kimble, Rory Maurer, and Matthew Curattalo ended up with points as well due to assists. Goaltender Denis McGarry had a nice recovery after a slow start, finishing the game with 32 saves from 37 opportunities.

The game got chippy at times with both teams playing physical, spending a combined 14 minutes in the box for penalties like boarding and roughing. Rivalry games bring out the best from both teams, and when asked about how the team prepared for this one, alternate captain Eddie Dahdah said, “The boys came to play, everyone carried their weight and did their job to secure the win. Even when we were down, everyone kept their heads up and kept chipping away to get back in the game and get the win.”

The victory was a combined effort from all three lines. “The coaching staff is big on culture, especially on the bench during games. The bench showed great energy when any of our players on the ice had a big play,” said Winters on the impact of a team effort.

Winters continued on about how the smaller things in the game are also key to victories. “Big plays just don’t mean goals or key saves,” he said. “Everything from sacrificing your body to block a shot or sprinting 200 feet on a back check when you are almost gassed are big plays. Those are plays that get the bench going, which adds to the team’s energy and excitement.”

Overall, it was an encouraging way for the Roadrunners to begin their 18 game season. Saturday’s game was the first of two against Fordham this season, with the second taking place at Fordham University on Oct. 3, the team’s next scheduled game. For fans not able to attend games at Ice Vault Arena, games are streamed on YouTube live through the Ramapo Ice Hockey YouTube channel.