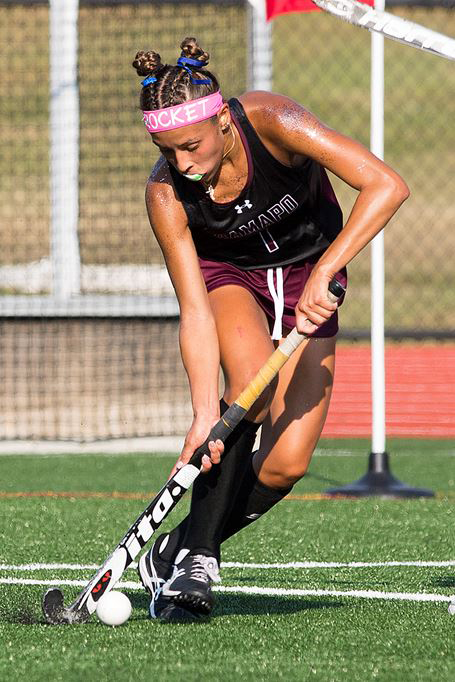 In its first New Jersey Athletic Conference (NJAC) matchup of the season, the Ramapo field hockey team took down Stockton University in a thrilling 3-2 victory at home. It was an encouraging start to the NJAC season for Ramapo, as they battled back from a two goal deficit in the second half.

Junior forward Victoria Docherty once again scored in this one, tying the Ramapo all-time single season goal record with her 18th goal of the season. Docherty, who took home NJAC Offensive Player of the Week honors, played a key role in the game, much like she has the entire season. Senior midfielder Angela Oskierko was responsible for the other goal in this one, giving her five in the season.

It was a tale of two halves for each team, as Ramapo was held scoreless until the 35th minute of action. In the first half Stockton did their best to limit opportunities for the Roadrunners, holding them to just three shots on goal in the first 30 minutes.

Ramapo struggled to get the ball rolling out of the gate, especially looking sluggish at times on defense. Despite all of this, they were still able to limit the damage to one goal allowed in the first half.

When the second half started, it was more of the same from each team. Stockton scored four minutes into the third quarter, giving them a 2-0 lead. Then, things started clicking for Ramapo.

Just less than a minute after falling into a two goal deficit, Oskierko put one in the net off a pass from Tovar. This goal was all it took to give momentum back to Ramapo. From that point on the Roadrunners took control of the game, scoring again three minutes later and eventually taking the lead off the Tovar goal late in the fourth quarter.

“It was an important win for us,” said junior defender Clare Nugent. When asked about what winning their first conference matchup of the season like this meant, she said, “Even though we were down by two goals at one point, we fought back, showing a lot of heart and that the game isn’t over until the clock runs out”.

Ramapo will look to keep its successful season going on Saturday, Oct. 13 against Montclair State University. This will be another NJAC matchup for the Roadrunners. The game will be played at 7 p.m. in Montclair, N.J.