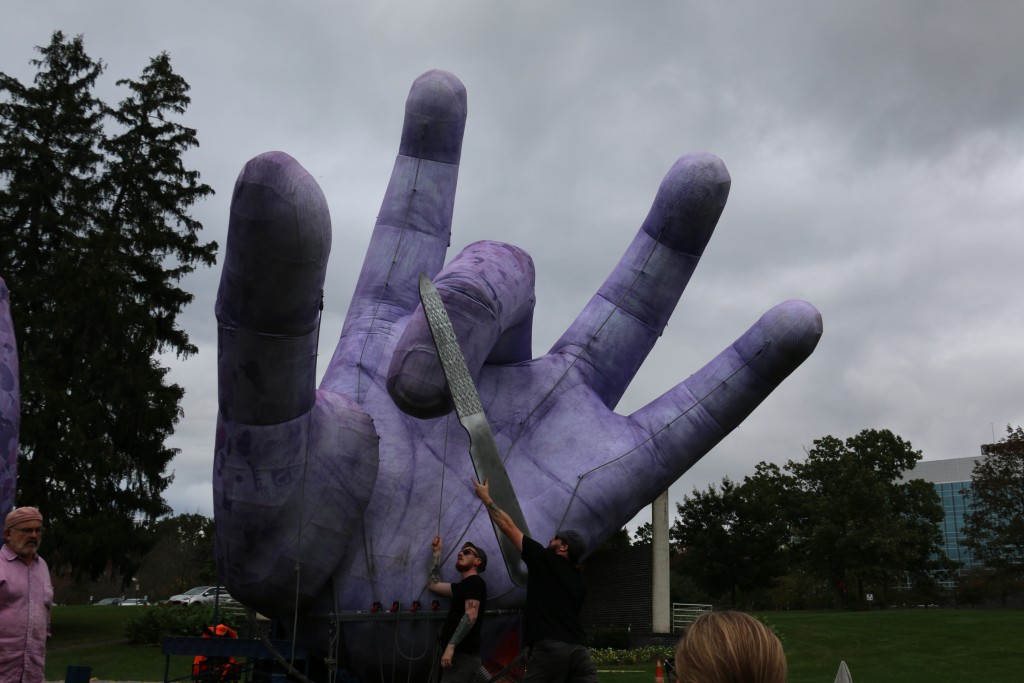 Squonk Opera is a music group based out of Pittsburgh, Pa. that combines progressive rock music with uniquely absurd performance visuals. On Tuesday, Oct. 5 and Wednesday, Oct. 6, Ramapo College and the Berrie Center welcomed them to perform at the Bandshell Lawn.

What makes Squonk Opera so special amongst other live opera performances? Squonk is the only opera group that incorporates large hands. That’s right. Part of Squonk’s unique charm is performing alongside 20-foot-tall purple hands that fully function from palm to fingernail. They even have opposable thumbs.

They are currently on their fall tour “Hand to Hand,” which began in Davenport, Iowa on Aug. 21 and will end in Columbia, Md. on Oct. 16. The group performed a total of four concerts for the Ramapo community, all free of charge.

According to the Berrie Center’s description, their show “Hand to Hand” is “propelled by two giant puppet hands, each the size of a house and rigged like a sailing ship,” and features “music that blows the roof off.”

The two giant hands and leveled stage took up a large portion of Bandshell lawn, and it completely blocked Ramapo’s resident stage. Seats were spread out for audience members to remain socially distanced while still fully engaged with the performance.

Along with the hands, there were five musicians — Squonkers rather — and a handful of stage crew that helped maneuver the hands and props. The collective effort was impressive, and it truly displayed the time and dedication it takes to put on each of their shows.

From keyboard to oboes to bagpipes, the musical range from the Squonkers was nothing short of impressive. The Squonkers each had their own instrument to tend to, and they all were dressed in the same light pink color — head to toe. The pink matched nicely with the purple hues on the hands, creating a rather pleasing palette.

The construction of the show was timed like any other music performance, but it demanded audience members’ attention with its absurdity and killer tunes.

“The Squonkers, dwarfed by the hands, climb a multi-tiered stage,” their advertisement shares. “Music rises from a single finger flicking an organ key, as natural an expression of humanity as a wave or a fist. Squonk’s original progressive rock drives a journey that is spectacular, plaintive, and comic.”

A highlight of the show was the thumb war between the guitarist and bassist. Not only were each of the players maneuvering a giant thumb on their back and engaging in a physical thumb battle, but they each were partaking in a riff-off. They each had their moments to shine before rejoining their fellow Squonkers.

Towards the end of the performance, a Squonker asked audience members to come up and help pull the fingers and operate the hands. Volunteers made their way to the big hands and began to tug on the strings, creating hand movements that resembled someone playing a string instrument.

“Hand to Hand” concluded with powerful, uplifting music, roaring over the Bandshell Lawn and beyond. A new backdrop was raised, rotating with a series of flashing lights until Squonk’s final beat. After a wild round of applause, audience members were given the opportunity to experience a behind the scenes tour and learn about the handy ins and outs of Squonk Opera.